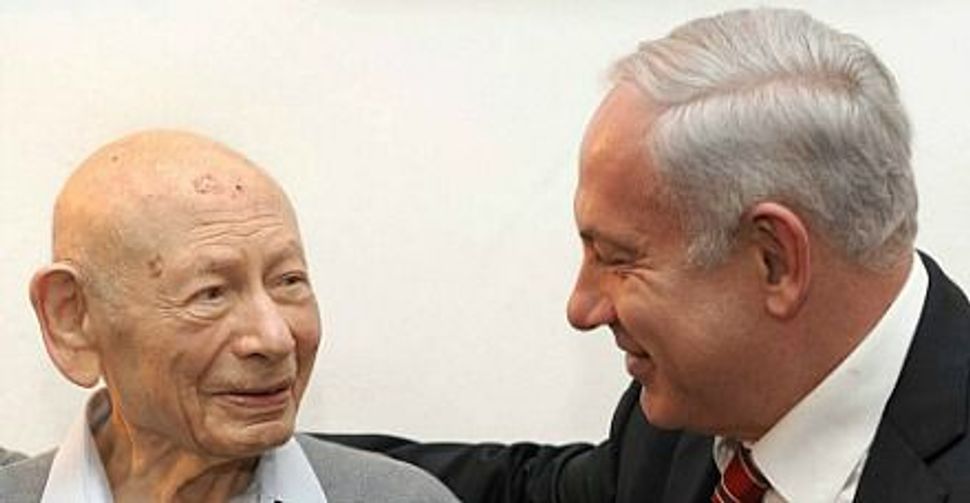 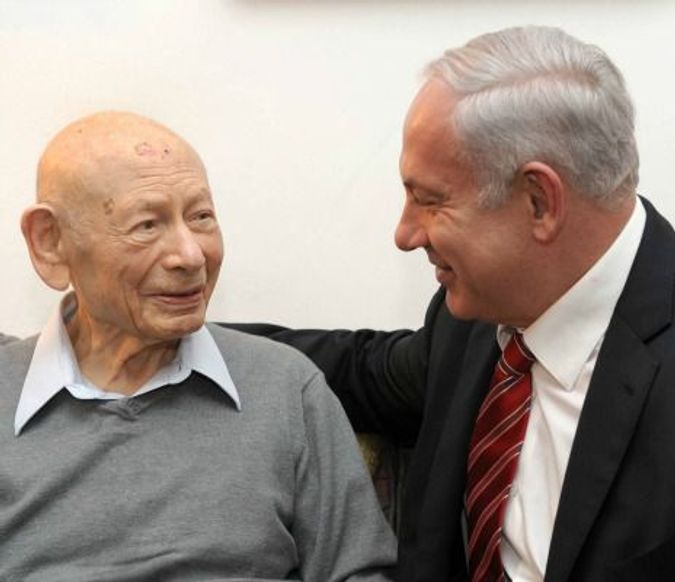 Bibi Netanyahu and his dad Image by Getty Images

With the Israeli-Palestinian peace negotiations operating under a tightly sealed cone of silence imposed by Secretary of State John Kerry, Middle East policy junkies have developed an elaborate guessing game that takes the form of a will-he-or-won’t-he dissection of Prime Minister Benjamin Netanyahu’s intentions.

The idea is to examine what’s known about Netanyahu’s past, his psychological makeup, his current actions and his relationship with the rest of his Likud party, and then to guess whether he’s likely to embrace a two-state peace agreement that’s broad enough for the Palestinian side to buy into—assuming that they’re serious about making a deal as well. For aficionados of the game, the end point is to decide whether Bibi Is Ready to Cross the Rubicon.

The Rubicon was all the rage in the hallways of the Washington Convention Center during the J Street conference this week. Given that it’s J Street, one might have supposed going in that the popular answer would be No, that Bibi isn’t ready to cross. But that wasn’t the case. Talking to Knesset members, Israeli and American policy wonks and journalists, the betting was more or less even. And if you listened closely, what it really came down to was a sort of Israeli version of the Hastert Rule.

I refer, of course, to the rule imposed on the Republican majority in the House of Representatives by former House speaker Dennis Hastert of Illinois, under which a bill normally didn’t come to the floor unless it was backed by a majority of the majority. That is, a bill had to have the backing of a majority of the Republican caucus. Only in extraordinary circumstances would the speaker let a bill come be passed by a minority of the Republicans joined by a large number of Democrats. The Israeli equivalent is the rule that the prime minister doesn’t bring a bill to the Knesset unless it’s first approved by a majority of his Cabinet and of his own party.

It’s the Hastert Rule that’s crippling congressional budget discussions right now. It’s widely believed that the House would easily pass a continuing resolution to keep the federal government open, vote to raise the debt ceiling and perhaps even adopt an actual budget—without grandstanding over ObamaCare—if Democrats and reasonable Republicans were allowed to join forces. But House Speaker John Boehner has resisted letting the legislation come to the floor for a vote without a majority of his majority Republicans. As a result, we’re hostages to the Tea Party and its allies. That’s the Hastert Rule.

The Israeli version of the Hastert Rule is based on the fact that there’s a solid majority in the Knesset for a two-state peace agreement— even for a deal that includes borders based on the 1967 lines (with land swaps) and a shared capital in Jerusalem, or so I was told by party leader Zahava Gal-On of the left-wing opposition Meretz party — but most of Netanyahu’s own Likud party seems to be firmly against it. He would have to defy most of his party and perhaps a majority of his Cabinet and governing coalition to bring such a deal to the floor for a vote.

Three of the keynote speakers at plenum sessions of the J Street conference were heads of Israeli parties—all of them women, interestingly: Tzipi Livni of Hatnuah, Netanyahu’s justice minister and chief peace negotiator; Shelli Yachimovich of the center-left opposition Labor Party and Gal-On of Meretz. Both Yachimovich and Gal-On stated clearly that if Netanyahu were to bring a peace deal to the Knesset floor their parties would support him. The same message came, less expectedly, from another Knesset member who addressed J Street, Yitzhak Vaknin of the ultra-Orthodox opposition Shas party. In effect, they were asking him to violate the Hastert Rule, go around the majority in his own ruling party and rely on the opposition to pass the measure.

For Netanyahu to do that, though, he would probably have to break up the Likud and abandon its hardline wing the way that Ariel Sharon did in 2005 when he decided to withdraw from Gaza. This is where the psychology comes in: Unlike Sharon, whose family was rooted in the labor movement, Bibi was born and raised in a family and a social milieu of intense party loyalists. His late father, historian Benzion Netanyahu, was a close aide to Vladimir Jabotinsky, founder of the Zionist Revisionist movement that eventually became the Likud.

Will Bibi move forward toward a peace agreement that will sever his ties to his past and his family heritage? Or won’t he?