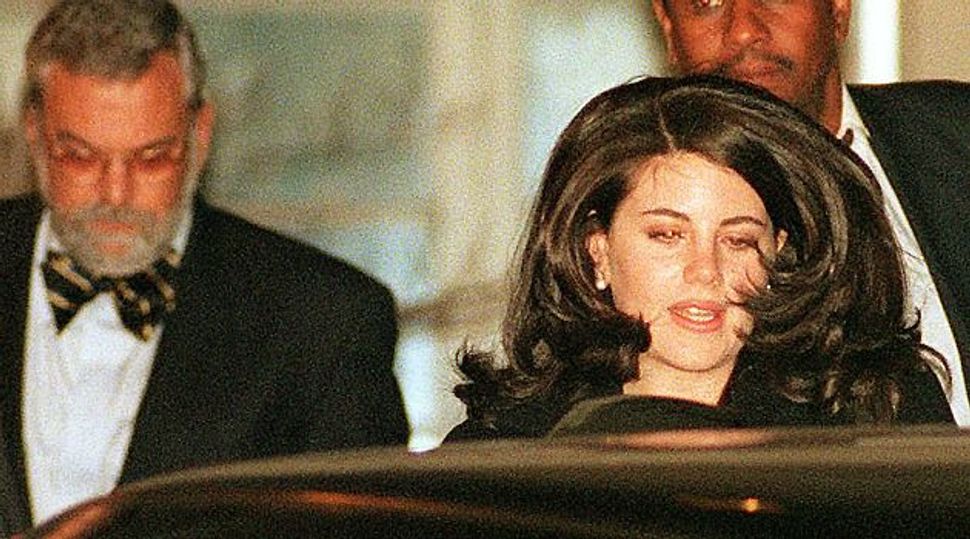 Where?s Monica?: A headline-grabbing scandal once bailed an Israeli leader out of a tricky situation during a U.S. mission. Benjamin Netanyahu had no such luck this time. Image by getty images

One of the Marx Brothers — I think it was Karl — once wrote that history has a way of repeating itself, “first as tragedy, then as farce.” He forgot to mention how hard it is to tell which is which.

Case in point: Benjamin Netanyahu’s whirlwind, two-day United States visit at the end of September. The Israeli prime minister was on an urgent mission to halt the seduction of President Obama and other Western leaders by Iran’s silver-tongued new president, Hassan Rowhani. Netanyahu’s plan was to spend September 30 at the White House, convincing Obama and his top aides of Rowhani’s duplicity, and the next day, October 1, appealing to the conscience of the world from the rostrum of the United Nations.

The trouble was, his timing was off. Netanyahu arrived in Washington on the last day of the American fiscal year, at a moment when the eyes of the world were riveted by the Republican kneecapping of the U.S. government. His fulminations in the Oval Office scarcely registered on the Beltway Richter scale. His wakeup call to the world community barely managed to wake up the bored diplomats in the General Assembly hall.

Between the government shutdown and the launch of Obamacare, Bibi’s call to arms didn’t make the front pages.

In a weird way, it’s a repetition of an event in Netanyahu’s history, another mission to Washington that was overtaken by domestic U.S. politics. It was 15 years ago, in January 1998. The prime minister was at loggerheads with President Clinton over a much-delayed West Bank redeployment, or handover of land to the Palestinian Authority.

Prime Minister Yitzhak Rabin had signed onto the handover in September 1995, over the furious objections of then-opposition leader Netanyahu. A few weeks later Rabin was assassinated. Netanyahu became prime minister in 1996 and proceeded to stall, infuriating Clinton. Months of tension followed. In January 1998 Clinton finally called him on the carpet.

Netanyahu landed in Washington on January 20 and went directly to the Mayflower Hotel to address a conservative rally led by the Clinton-bashing Rev. Jerry Falwell. The White House was furious. Tensions were at a fever pitch when the president and prime minister met the next morning. Things were no better when they met again that evening.

But in the middle of that meeting Clinton was informed by an aide that the Washington Post was about to break the story of his relationship with Monica Lewinsky. The tone of the conversation immediately changed. Pressure on Netanyahu abruptly vanished and he returned home a hero.

If there’s a general rule, it’s that timing is everything. Washington’s partisan flare-ups have left many a visiting foreign dignitary standing around looking foolish, like so many tourists arriving to find Disneyland closed for repairs. Bibi has a special reputation for manipulating American political crises to his own advantage, based largely on the Monica experience. But they can work the other way, too, as he learned this time.

It didn’t help the prime minister’s cause that he had a message nobody wanted to hear. It’s not just that the White House insists on pursuing a diplomatic track with Iran, which will inevitably mean both give and take. That’s old news.

True, Bibi might have flown into town and grandly taken credit for sounding the alarms that made the case for global sanctions and brought Tehran to the table. He could have congratulated Obama and the allies for following his advice — and encouraged them, by the way, to keep up the good work. But that’s not Bibi’s way. He has trouble being gracious when there’s an opportunity to be abrasive and hectoring.

No, Israel’s prime minister has two other problems that weaken him on the American and world stage at the moment. One is his longstanding alliance with the conservative wing of the GOP. He relied on Republicans in Congress for years to defend his settlement policy against White House and international pressure. The result wasn’t a legitimization of the settlements in any international arena, but rather a growing delegitimization of Israel itself.

Since Obama’s reelection last year Netanyahu has tried to create some space between himself and the GOP and foster an image of independence, but he’s been only partly successful. As a result, the current derangement of the Republicans in Congress and the resultant collapse of Republican credibility is hurting Netanyahu.

The other problem is that Netanyahu’s argument for maintaining an aggressive posture toward the new Iranian government is based on substantial Israeli intelligence, but his own intelligence professionals think he’s drawing the wrong conclusions from the data, and everybody knows it.

It’s been two years since Mossad intelligence chief Meir Dagan called a military strike on Iran, Netanyahu’s favored solution, the “stupidest idea” he’d ever heard. We’ve since learned that the rest of Israel’s military and intelligence leadership, the heads of the army and Shin Bet, felt the same way. All of them were retired in a clean sweep in 2011, apparently because Netanyahu wanted a new team that would back his adventures. But it turns out his new security chiefs are equally opposed to a solo Israeli strike.

If that weren’t enough, the head of Israel’s military intelligence during that Iran debate, Amos Yadlin, published an essay on the very day Netanyahu left for Washington in September, urging him to work with Obama and the allies for successful nuclear negotiations, rather than standing alone and making himself irrelevant or worse.

Yadlin, who now heads Israel’s main strategic affairs think tank, laid out 10 specific points to aim for or avoid so that if Iran ends up retaining a civilian nuclear program — as seems inevitable — the West has tools to ensure it can’t turn military later on. Yadlin, by the way, was one of the eight pilots in the squadron that bombed Iraq’s nuclear reactor in 1981. It’s true that flying a plane over a nuclear reactor doesn’t make you an expert on nuclear strategy, but going on from there to heading Israel’s war colleges and then its military intelligence does. It all adds up to a career path and a track record.

Netanyahu has his own track record. That’s why Yadlin warns him “not to paint himself into a corner and make himself an obstacle to an agreement.” His history contains a fair share of farce. If it repeats itself, it could be as tragedy.