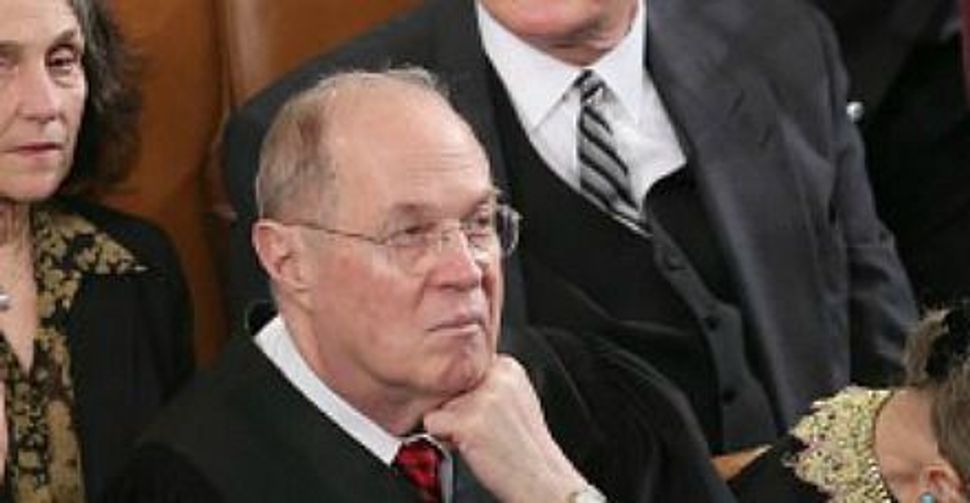 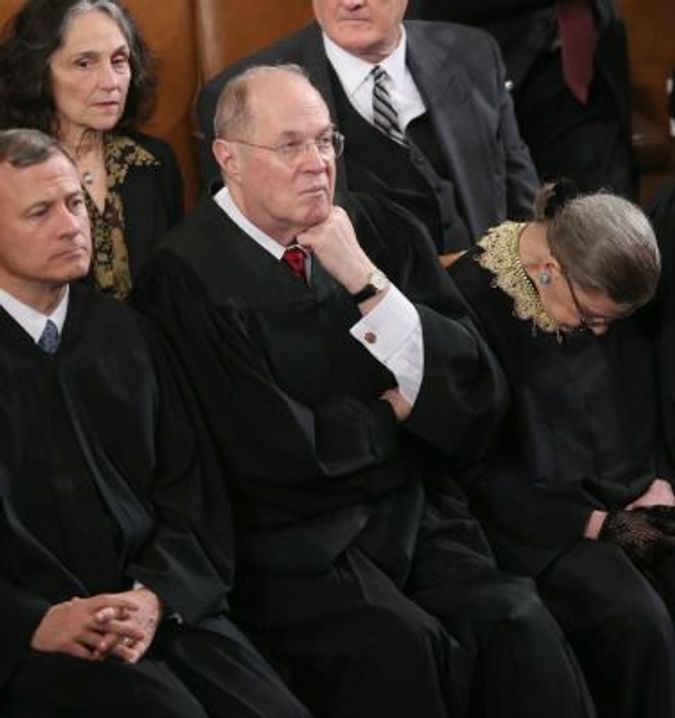 Anthony Kennedy, the Supreme Court?s justice in the middle. Image by Getty Images

While we’re all riveted to the hostage drama in the House of Representatives, there’s another lopsided showdown shaping up in more-or-less plain sight that puts some basic values and settled law up for grabs. Like the Capitol Hill farce, this one has a tiny band of fanatics determined to trash three generations of evolving American consensus, and our collective fate somehow rests in the hands of one enigmatic figure.

Three cases on the court’s docket, Segall writes, have the potential to transform our legal landscape—drastically expand states’ power to limit access to abortion, virtually eliminate restrictions on direct campaign contributions and—get this—throw door wide open for government entities to endorse particular (usually Christian) sectarian religions for invocations, prayers and so on, so long as the measures aren’t “coercive.”

The choices before the court are so stark, and the court’s divisions so sharp-edged, that the direction the country will take in all three areas will probably be left entirely up to one person, Justice Anthony Kennedy, the Reagan appointee who became the court’s swing vote after the 2005 retirement of Sandra Day O’Connor. In the vast majority of politically charged cases the court’s conservative and liberal blocs vote predictably and the decision goes to the justice in the middle who holds the swing vote.

Ironically, Kennedy took a whack at the legitimacy of his own role, presumably unintentionally, during a lecture last week at the University of Pennsylvania. Here’s how the Associated Press quoted him:

Any society that relies on nine unelected judges to resolve the most serious issues of the day is not a functioning democracy.

I just don’t think that a democracy is responsible if it doesn’t have a political, rational, respectful, decent discourse so it can solve these problems before they come to the Court.

Kennedy inherited the swing position after Sandra Day O’Connor retired in 2005 and was replaced by Samuel Alito. Previously Kennedy had been firmly in the conservative bloc, and his sudden relocation to the middle meant the court as a whole had moved sharply to the right.

Since then, charged 5-4 decisions have found Kennedy voting with the majority between 75% and 94% of the time. In 63% of those cases—nearly two-thirds—he’s sided with the conservatives. O’Connor started out in the conservative wing but moved leftward and came to be seen by liberals as the court’s moderating influence.

The National Journal’s Brian Resnick had this snarky but deadly accurate rejoinder to Kennedy’s Pennsylvania remarks:

As the usual swing vote on the Supreme Court, Justice Anthony Kennedy has a strong hand in shaping the laws and policies of the United States…

Most recently, he wrote the majority opinion for U.S. v. Windsor, the case that struck down the Defense of Marriage Act. Also recently, he sided with the majority, this time with the conservatives, in the divisive Shelby County v. Holder case, which invalidated a portion of the Voting Rights Act. Kennedy was the swing vote both times.

It’s not too much of a stretch to say that Kennedy’s was the only decision that mattered in these cases. In the 2010-2011 Supreme Court term, Kennedy voted with the majority 94 percent of the time.

In a lot of the cases, nine unelected judges is really only one. And it’s Anthony Kennedy.

Here’s how Lithwick summed up the church-state separation case on the docket, Greece v. Galloway:

Since 1999, the town of Greece, N.Y., has opened its town hall meetings with a prayer offered by a “Chaplain of the Month.” After two citizens of the town challenged the prayer sessions, the U.S. Court of Appeals for the 2nd Circuit found that because almost two-thirds of the prayers contained sectarian references to “Jesus Christ” and “Your Son” and the “Holy Spirit” the town had crossed the First Amendment line on government establishment of religion. Greece v. Galloway gives the court an important opportunity to revisit its 30-year-old decision, in Marsh v. Chambers, allowing for legislative prayers so long as they could not be “exploited to proselytize or advance any one, or to disparage any other, faith or belief.” As Christopher Lund has argued here, the court needs to clarify the boundaries of Marsh and this may be the case to do it. It’s not at all clear what the court will do about the prayers in the Town of Greece. What is clear is that O’Connor’s special solicitude for reasonable onlookers and outsiders, confronted with what they viewed as government “endorsement” of sectarian religious messages, may no longer have a vocal champion at the court. And if the court decides to take on a second religious liberty case—the question of whether, under the Affordable Care Act, for-profit employers can refuse to provide contraception to their workers on religious grounds—we may be in for a truly rollicking ride on the religious freedom front.