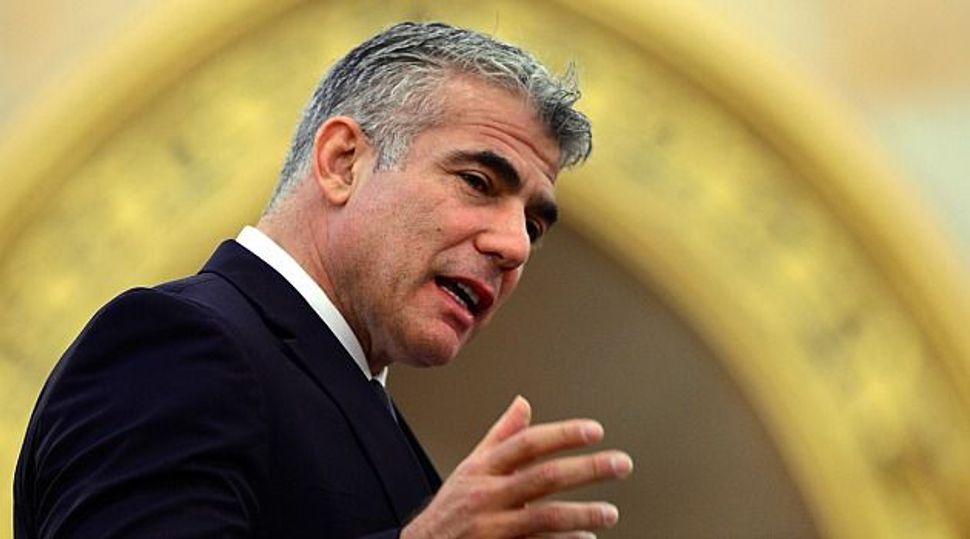 Israel’s political golden boy Yair Lapid has been making the rounds in Washington this week, filling up some necessary gaps in his resume.

The telegenic Lapid, who until recently was a newspaper columnist and TV host, had hardly had a chance to establish ties with the American political elite before pulling a huge surprise in last year’s elections and becoming the leader of Israel’s second largest party.

Now finance minister, Lapid has replaced his trademark black T-shirt with a dark suit. And he is making sure not to miss any required stop on the power tour.

In his week long tour of New York and Washington, Lapid spent an evening speaking to PBS’s Charlie Rose and the Wall Street Journal’s editorial board; in Washington he met with the House and Senate leadership; sat down with the pro-Israel lobby AIPAC; and gave what is almost a mandatory presentation for any aspiring Israeli leaders coming to town – a speech at the Washington Institute for Near East Policy.

In coalition negotiations with Benjamin Netanyahu following the January elections, Lapid initially aimed for the post of foreign minister, but after Likud members insisted on keeping the position open for Avigdor Lieberman, Lapid opted for the treasury. The trip to Washington was timed to fit his participation, with other finance ministers from around the world, in the fall meeting of the International Monetary Fund.

But Lapid succeeded in packing his schedule with diplomatic meetings and speeches, indicating that his interest in the foreign ministry, or, as many speculate, in running for prime minister in the next elections, has not subsided. The administration rolled out the usual tribute it reserves for up-and-coming Israeli leaders: a one-on-one meeting with the vice president. Biden and Lapid met for more than an hour on Thursday and the meeting, according to official readouts, focused on Iran’s nuclear threat and the upcoming negotiations with Tehran.

A meeting with the veep (or in some cases, a “drop in” by the president while the visiting dignitary is meeting at the White House with the National Security Adviser) are a tool often used by the administration to signal favor on a visiting dignitary. It ranks lower than a full meeting with the president, but is valuable enough to provide the visitor with a tangible sign of significance when he goes back home. Next time around, if questioned about his foreign policy credentials, Lapid will be able to flash his photo with Biden, a clear sign he has made it on the international scene.

Lapid’s message to the American public stuck closely to the the policy lines adopted by the Likud-led Israeli government. On Iran, the young finance minister stuck to Bibi’s talking points, using the term “smile attack” to describe Iranian president Hassan Rouhani’s new appeal to the international community. But when speaking about the peace process, Lapid veered from the official government line, stating that he does not agree with Netanyahu’s demand that Palestinian recognize Israel as a Jewish state as a condition for implementing a two state solution. He did, however, echo Netanyahu’s line about the need to build trust with the Palestinians before stepping into a full agreement.

Lapid arrived at the United States shortly after stirring controversy in Israel with remarks he posted on Facebook, blasting young Israelis who chose to leave the country because of the financial difficulties facing Israel’s middle class. “Forgive me if I’m a little impatient with those who are willing to throw away the only country the Jews have because it’s easier to live in Berlin,” he wrote, after reminding readers he was writing this post from Budapest, where his father was almost killed and where many of his family members were murdered by the Nazis.

Speaking to young Jews on Wednesday, Lapid struck a softer tone, focusing on the elements uniting the Jewish world, whether in Israel or in the Diaspora, rather than on the issue of Israelis leaving the Jewish state in favor of the Diaspora.

“If we are to move the biographies of our fathers and grandfathers a half an inch, I could be you and you could be me,” he told a group of 500 Birthright alumni gathered at Washington’s Ronald Reagan building.

The statement followed Lapid’s moving account of how his father, the late Israeli journalist and politician Tommy Lapid, escaped death by hiding in a public lavatory in Budapest when the Nazis rounded up the city’s Jews. The story, almost identical to that told by Lapid in his previous meeting with Jewish activists a year ago, touched many in the audience, although the talk among the college-aged Birthright participants in the lobby afterwards focused more on Lapid’s telegenic looks and impressive delivery, than on his family story.

Organizers of the event, however, did not let the fact that Lapid now control Israel’s finance ministry go unnoticed. Heads of Birthright showered praise on the minister, who has been in office for only six months, for backing Birthright programs. The Israeli government currently provides nearly $40 million for Birthright annually under an agreement reached before Lapid took office.

Still, just as a reminder to the new finance minister that he is expected to uphold this support, a Soviet-style huge banner was projected onto the stage throughout the event reading, in English and Hebrew: “Thank you Minister Lapid for your support of Taglit-Birthright.”