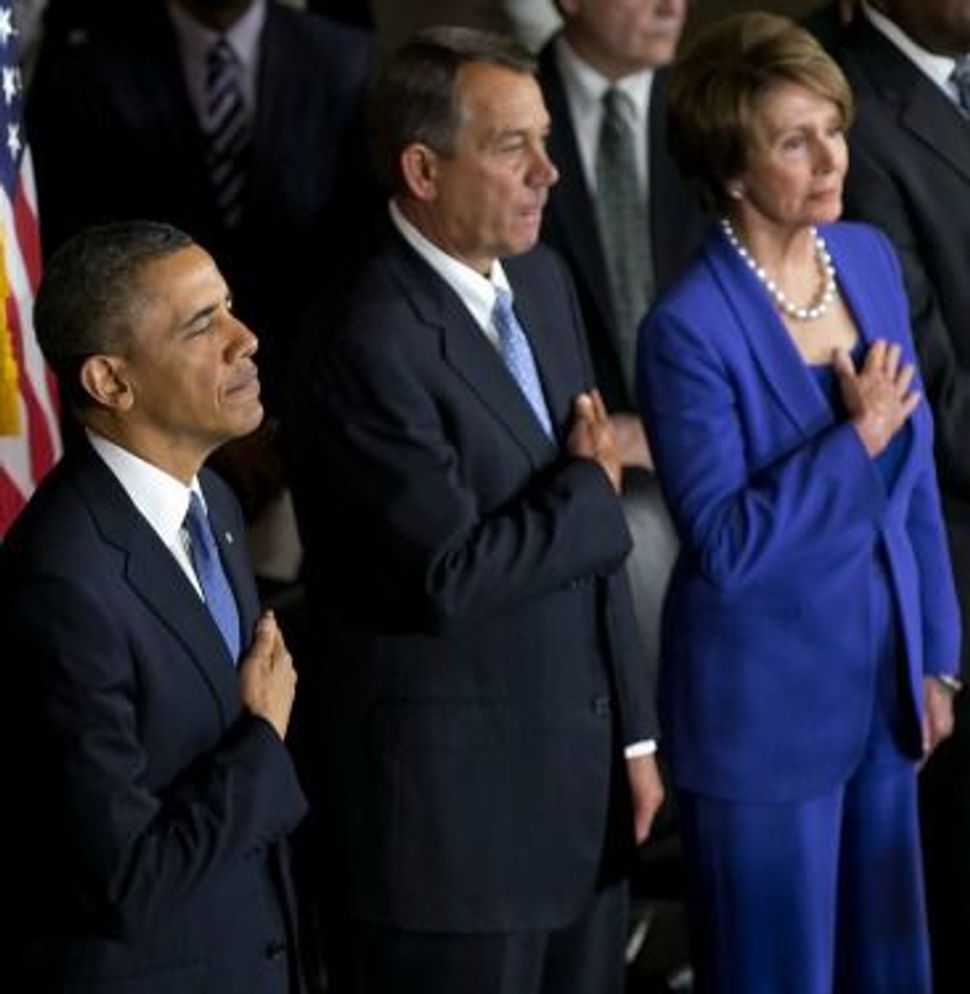 ?I do solemnly swear?? Image by Getty Images

The last I heard, the Fourteenth Amendment was still part of the Constitution. Here’s Section 4:

The validity of the public debt of the United States, authorized by law, including debts incurred for payment of pensions and bounties for services in suppressing insurrection or rebellion, shall not be questioned.

Call me crazy, but that seems pretty straightforward: One may not take steps to impede the United States’ payment of its debts. That should mean that any law permitting or enabling the prevention of America paying its debts is prima facie unconstitutional. The debt ceiling statute, by asking members of Congress to decide whether the government may continue to pay the money it owes, is by definition a violation of the Constitution. Its very language questions the public debt of the United States.

Pelosi, Geithner and others have raised this argument several times in the last few years, but Obama punted then and he did it again this time (surprise, surprise) to avoid confrontation with Congress and stick to his mythical middle ground. He’s afraid the House would impeach him and cause an even bigger crisis of confidence.

But it doesn’t have to be a confrontation between the branches. An outside goo-government group—or House Democrats—could and should go to the D.C. Circuit and challenge the constitutionality of the 1917 statute creating the debt ceiling. They should ask for a temporary injunction suspending enforcement of the law until the matter has been adjudicated.

A constitutional scholar might tell us that the public debt of the United States doesn’t refer to bills it has agreed to pay, but to repayment of bonds it floated—money it borrowed—to pay those bills. Even by that reading, any measure that raises questions about service of the debt—keeping up interest payments—should be unconstitutional. The fact that Republican caucus members suggest a way around it—paying the interest and stiffing everyone else—doesn’t negate the fact that the question has been raised, and that’s what’s unconstitutional.

Once you allow a vote on whether to continue paying the government’s bills, you are asking members of Congress to decide whether or not they want to honor the government’s debts. That actually puts the members in a bind. Every member, on entering office, did “solemnly swear” to “support and defend the Constitution” and to “bear true faith and allegiance” to it. Voting against an extension of the debt ceiling, thus preventing the government from paying its debts, amounts to violating the oath of office. One could argue that it would subject them to removal.

In any event, the Supreme Court ruled in 1935, in Perry v. United States, that the 14th Amendment’s language should be construed as referring to all U.S. “public obligations,” not just particular bonds up for payment. Here’s what Chief Justice Hughes wrote about Section 4 of the 14th:

We regard it as confirmatory of a fundamental principle which applies as well to the government bonds in question, and to others duly authorized by the Congress as to those issued before the amendment was adopted. Nor can we perceive any reason for not considering the expression ‘the validity of the public debt’ as embracing whatever concerns the integrity of the public obligations.

Then there’s the question of precedent: Administrations have deferred to the debt ceiling law since it was first passed in 1917, so that validates it. But the notion of a century of precedent hasn’t stopped this Supreme Court from doing what it wanted in the past, so it’s hard to see why it would now. A more serious problem is that this court doesn’t seem willing to break with Republican policy on much of anything. It’s hard to imagine Roberts & co. siding with the Constitution over the Tea Party on this either. Maybe Kennedy would be willing to go along with reason. And if he didn’t and the United States’ credit rating plunged as a result of the court disavowing our constitutional commitment to the debt, at least we’d know we deserved it.