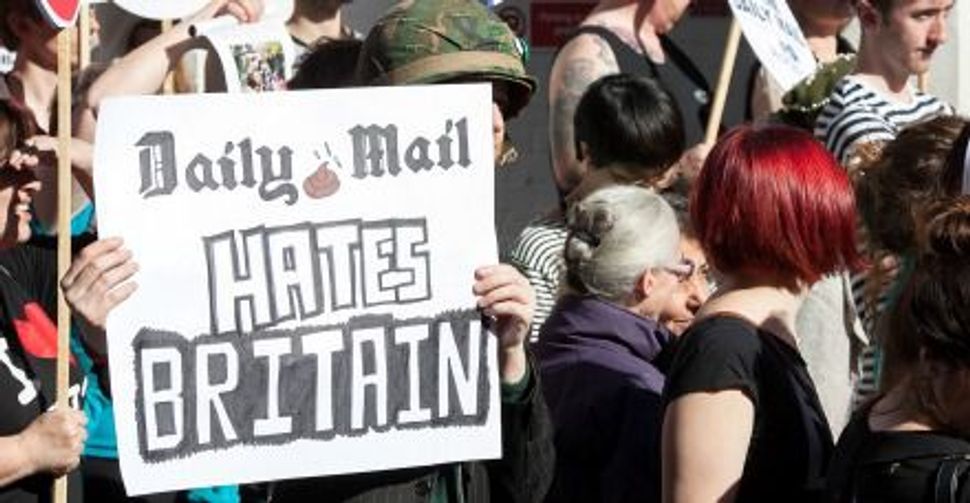 Given that The Daily Mail has never liked anyone whose politics are to the left of General Franco, it is hardly surprising that they would not care for Ralph Miliband or indeed his son, Ed.

After all, Ralph Miliband was one of the foremost English socialist thinkers and writers of the 20th century. Miliband favoured the upending of the existing class structure and the dismantling of the existing establishment including the Church, the Lords, and the business elite. He also favoured nationalisation of key industries with a view to “improving the efficiency of a capitalist economy,” much to the chagrin to Mail, who wrote that he “chose to ignore the lamentable performance of nationalisation, which proved to be anything but efficient.”

“The Man Who Hated Britain” – the Mail’s recent feature on Miliband – labors (forgive the pun) boringly and boorishly on his politics and its implications for what his son might do if he were Prime Minister.

“But how passionately he would have approved today of his son’s sinister warning about some of the policies he plans to follow if he ever becomes Prime Minister,” Geoffrey Levy writes. “Such as giving councils draconian new powers to seize into public ownership land held by developers who fail to build on it.” The horror.

And yet were the piece merely a castigation of the professor’s unabashed socialist politics, then that would be fine, insofar as it falls within the Mail’s usual remit.

But in “The man who hated Britain,” there are evidently other motivations at work. Miliband is described as “the immigrant boy whose first act in Britain was to discard his name Adolphe because of its associations with Hitler, and become Ralph, and who helped his father earn a living rescuing furniture from bombed houses in the Blitz.” For rescuing, read pilfering.

“As for the country that gave him and his family protection, the 17-year-old wrote in his diary: ‘The Englishman is a rabid nationalist. They are perhaps the most nationalist people in the world . . . you sometimes want them almost to lose (the war) to show them how things are. They have the greatest contempt for the Continent . . . To lose their empire would be the worst possible humiliation.’

“This adolescent distaste for the British character,” Levy writes, “certainly didn’t stop him availing himself of the fine education that was on offer in this country, or spending the rest of his life here.” He continues, “Given this tirade, one is entitled to wonder whether Ralph Miliband’s Marxism was actually fuelled by a giant-sized social chip on his shoulder as he lived in his adoptive country.”

Miliband, in the Mail’s portrait, was simply ungrateful, and a hypocrite too. “Of course, both his sons went to the ‘Establishment’ Oxford University,” Levy continues. “And in recent times there have been embarrassing allegations involving how the ownership of the family house was altered – albeit perfectly legally – which experts say enabled his sons to avoid death duties.”

The picture the Mail has sought to construct here is a crude one, and a familiar one to boot. It is a stereotype that has been with us for a long time and should be easy to spot when it is right in front of one’s nose and label it for what it is. Here, Miliband is portrayed as the unpatriotic wanderer, the rootless cosmopolitan, the untrustworthy Bolshevik, the dodgy swindler, the disloyal and discontented outsider with radical politics operating as a fifth column seeking to upend his adoptive country from the inside.

It is a manifestation in print of the sort of English anti-Semitism that Miliband would have and indeed seems to have experienced, as he notes in a letter to a colleague. “Also respectability, good taste, don’t rock the boat, there will always be an England, foreigners, Jews, natives etc are all right in their place and their place is outside…”

Jews in the English popular imagination during the time Miliband resided here were often associated with either Bolshevism or organised crime. Anti-Semitism would have shown itself not in the form of violence necessarily but rather something that would be heard on the edge of a remark, insinuations, scorns, scoffs. As George Eliot once wrote in a letter to Harriet Beecher Stowe:

Can anything be more disgusting than to hear people called “educated” making small jokes about eating ham, and showing themselves empty of any real knowledge as to the relation of their own social and religious life to the history of the people they think themselves witty in insulting? … The best thing that can be said of it is, that it is a sign of the intellectual narrowness—in plain English, the stupidity which is still the average mark of our culture.

The continued existence of the Mail is a testament to the narrowness and stupidity that still strangles English popular culture, of course. But more importantly, that the Mail would publish and then subsequently defend with even greater vociferousness this insidious screed, full of invective and nasty insinuations that need not take too much effort to unpick, speaks to something much darker in the mindset of that newspaper.

“Yes, it is theoretically possible that the paper would have hurled similar abuse at an Anglican-born Marxist scholar, had his son gone on to become the Labour leader,” Jonathan Freedland wrote in The Jewish Chronicle. “But would it have accused such a man of hating Britain? Or did the Mail know that, even on a subliminal level, its assault would carry extra force when applied to those eternal outsiders, the Jews?”