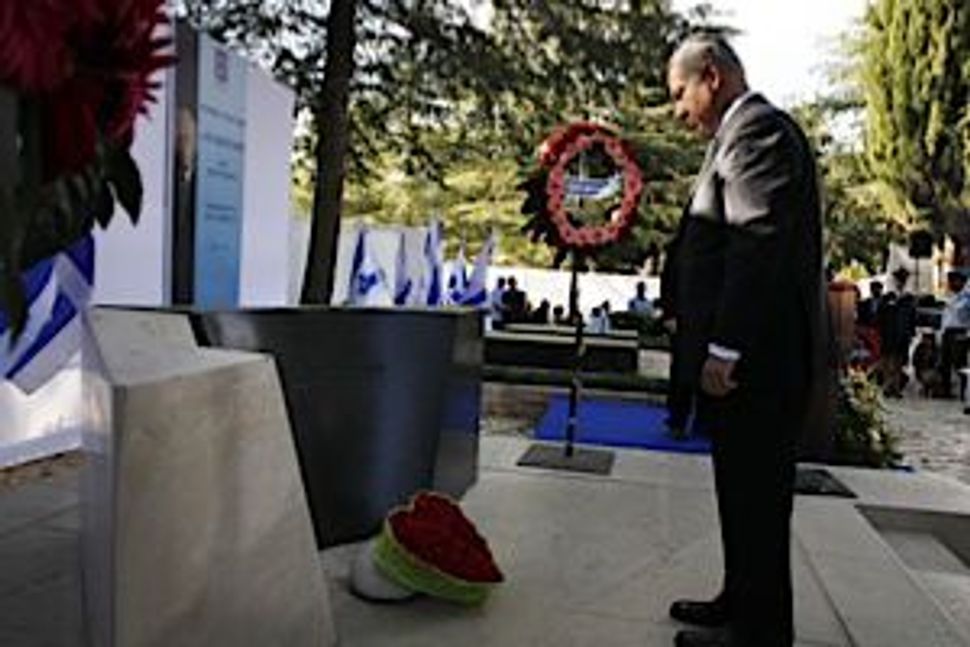 In the years immediately following the assassination of Yitzhak Rabin, the anniversary of his passing became an important event for British Jewry, only to see it weaken as the years passed, the peace process fell apart, and the image of Rabin faded like an old photograph.

This year, however, offered some hope for a burnishing of the image. On Wednesday evening, London’s new Jewish community centre, JW3, hosted a memorial event for Rabin attended by 200 plus people. This number, though respectable for a dank night in October, was not the most important thing about the memorial. It is that it was organized and put by the youth movements, Tzofim and Habonim Dror amongst others.

The young people reciting the blessings and singing the songs of memory and peace could not possibly have been thinking of Yitzhak Rabin the man. Most if not all of them would have been born after November 4, 1995, after the music ended and the shots rang out. Thus, their motivation could not have been the memory or the trauma of the event itself, a reaction to the assassination, but something much deeper: a commitment to the inspiration of Rabin and the ideas he died for.

The lingering question, however, as after the singing of Hatikva the attendees mingled and gossiped and shared stories before filing out in the London night is what are those ideas? What can it mean to remember Rabin in Diaspora?

It begins with recognizing that it is almost impossible, irrespective of one’s Zionism, for the aforementioned trauma of the loss to be the same for Israelis and British Jews, even for those old enough to recall the bullets and the blood. British Jewry, not being totally immersed in the tense, heightened political atmosphere of the period in Israel, cannot have had as close or visceral reaction to the assassination. The loss of innocence could not have been as personal. Thus, just as the youth movements think on Rabin as an idea, so too must this degree of remove make Rabin less real and more representative of larger things.

The memorial at JW3 gave an indication of what these larger ideas might be. First, it is to frame the loss of innocence more broadly, not only as the assassination of a Prime Minister – a terrible event in itself – but in the murder of a Jew by another Jew who attempted to use Jewish law in order to justify his heinous action. And, as if it were necessary, it is to draw a line and repudiate the notion, as perpetuated by Yigal Amir and a few schismatic rabbis, of Rabin as a rodef, that political disagreement demands physical retribution.

Second, it means to recall that some of the ideas that were diminished or damaged by Rabin’s loss are those which link together Israel and the United Kingdom. At the memorial, an essential quotation from John Stuart Mill was recited: “If all mankind minus one, were of one opinion, and only one person were of the contrary opinion, mankind would be no more justified in silencing that one person, than he, if he had the power, would be justified in silencing mankind.” To have a political leader felled by the hand of a fellow citizen is to witness great damage done to this principal, and to the concepts of democracy, civil society, and the rule of law themselves.

Third, it is a reaffirmation of the Zionism of the Diaspora and of the Zionism of Yitzhak Rabin which asserted that the pursuit for peace was itself a pursuit for greater security. The conclusion of the occupation is essential for many reasons, including universal themes pertaining to human rights, but for Rabin as witness to war and intifada it is to understand at once that holding onto the West Bank cannot guarantee security and that any final agreement must include within it terms to ensure things do not return to a pre-1967 condition. Thus, to remember Rabin in the Diaspora means to assert the importance of territorial withdrawal for security, not just withdrawal for withdrawal’s sake.

Whether there is to be a true revival of the remembrance of Rabin in Britain will be determined by what happens next year at JW3, and the year after that. If this were to occur, as painful as this act of memorialization is, it would not be a terrible thing if it means that to remember Rabin in the Diaspora connects British Jews to Israel by emphasising the anniversary’s Jewish and democratic characteristics.