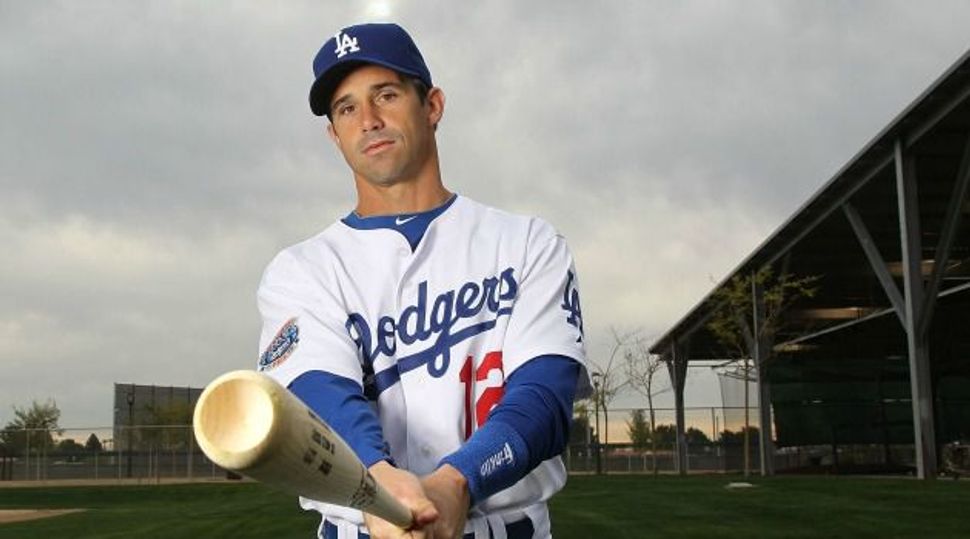 Brad Ausmus was named the Detroit Tigers manager this week, making him the sixth Jew to lead a Major League club.

As a player, he was an All-Star catcher for the Tigers, a three time Gold Glove winner playing for the Astros and possessor of the third-best lifetime fielding average of any catcher in major league history with a minimum of 1,000 games played.

The handsome and well-spoken Dartmouth grad’s conditioning and durability enabled him to catch over 100 games for 11 seasons in a row — even though his name flew under the radar of many fans fixated on the big hit.

Baseball insiders have long known Ausmus as a thinking man’s player as well as a catcher’s catcher. He spoke tp Larry Ruttman about anti-Semitism in the big leagues, the Jewish baseball heroes, and how his accomplished Jewish mother is his biggest role model.

Larry Ruttman: Brad Ausmus is identified as a Jewish player, but is he Jewish? Did you grow up in a Jewish household?

Brad Ausmus: My mother is Jewish, and my father is Protestant. Other than spending some of the Jewish holidays with my mother’s family, my grandparents, and lighting the candles at Chanukah, there wasn’t a lot of religion in the household. We’d light the candles, but we also had a Christmas tree.

How do you view your Jewish heritage?
I’ll say that my mother is Jewish, that my father is Protestant, that my name is German. There’s not much else to tell. I was not brought up in any religion, I wasn’t bar mitzvahed. I married a Catholic girl and have two daughters, one eight and the other almost ten. Other than the holidays we spent with my grandparents, there really wasn’t much Jewish religion or Catholic based religion in the household. I think my mom enjoyed Christmas more than anyone, because she didn’t have it as a kid growing up.

Have Jewish values osmotically or otherwise filtered into your personality?
I think certainly some of my mother’s values have. She is Jewish, she was raised in a Jewish household, and those values have been instilled in me. I am able to tell you what my mother’s values are. Treating everyone the same, assuming the best in everyone, assuming everyone is a good person until they prove otherwise, just generally being kind. I see Judaism as my heritage. Not only was my mother born and raised Jewish, but both my grandparents who were two of my favorite people, were very much practicing Jews, Jacques and Adele Dronsick.

Who are your role models?
I think anyone’s parents are role models to start. My father was a college professor at Southern Connecticut State University, holding a Ph.D. in philosophy, and actually teaching medieval European history. I wouldn’t say I was pressured, but I was encouraged strongly to go to college, and that encouragement was the reason I did both college and baseball (Brad graduated Dartmouth with a degree in government.) In fact, my mom told me that I got my first baseball glove when I was two years old. My mother is a special education substitute teacher in New Haven, Connecticut, teaching in all grades, pre- kindergarten through high school.

Did you ever run into any anti-Semitism at the major league level? At the major league level I really have not run into it. My mom wanted to expose me to anti-Semitism and racism. So she took me to a Ku Klux Klan rally in our hometown in Connecticut. She wanted me to see how these people act. I was pretty young, probably around ten, but yes, I remember it well. My mom wanted me to see how foolish these people were. She absolutely did succeed. I don’t remember exactly what was said, but there was a lot of chanting and yelling. Actually there were fewer Ku Klux Klan members there than there were protesters.

What is your attitude towards Israel?
No question I’d like to see Israel’s continued existence. I would also like to see peace in the region. I’d like it to be both ways. The question is: ‘Will it ever happen?’ I don’t think that Israel puts up with anybody’s bull, so to speak, and they are living in the most dangerous territory on the earth right now. So they speak softly and carry a big stick. I certainly understand what they do.

Do you have strong opinions about Jews who have had a profound impact on the history of baseball. What about Marvin Miller?
Marvin Miller had a huge impact on the history of baseball with the forming of the players’ union, and the free agency which followed. All of that escalated salaries, and affected agreements between the owners and the players, strikes, and lockouts. His successor, Donald Fehr, has certainly had a big impact. He’s a very bright guy.”

What is your take on retiring baseball commissioer Bud Selig?
(Selig will be) remembered for a number of things during his tenure, some good and some bad. On the negative side is the fact that a World Series was cancelled while Mr. Selig was commissioner. Then there’s that All-Star game fiasco where the game ended in a tie. Unfortunately, he’ll also be remembered for the steroid era. He was able to work out the last bargaining agreement without a work stoppage. It seems to me there are more fans since Mr. Selig took over, more money around, all those new stadiums. It seems like he’s made some decisions that have positively impacted that economic boom.”

Who had the most influence on baseball history?:
Jackie Robinson may have had the single biggest impact among all players ever, along with Branch Rickey, who made the decision to bring Jackie to the big leagues. Between the two of them, that may have been the most important change ever in baseball’s history. I would say that they had the greatest impact because that broke the color barrier in the game, and following that there were African Americans coming in, and a little later it opened up Latin Americans coming in.