Who Poisoned Yasser Arafat? The Palestinians. 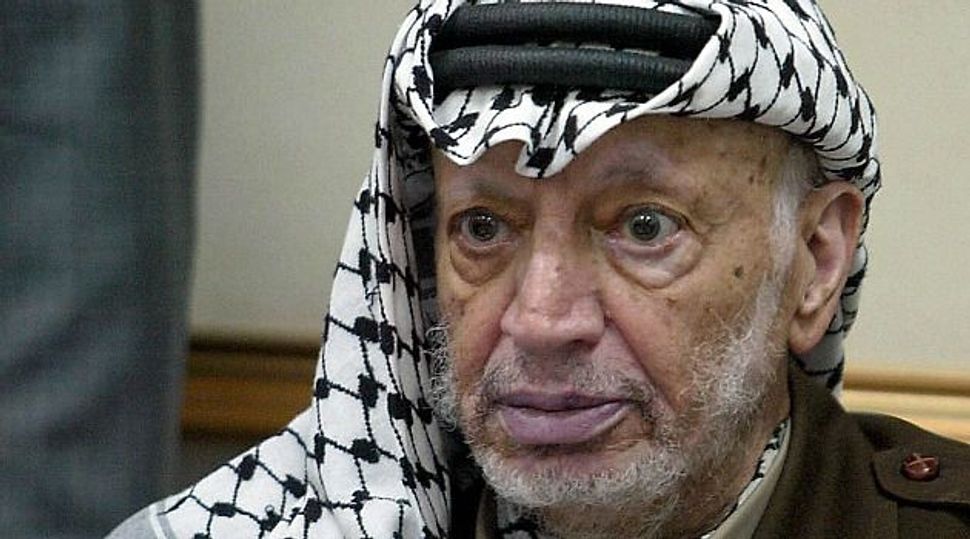 Inside Yasser Arafat’s Ramallah headquarters, the top military and political and money men of the Palestine Liberation Organizaion would speak about their leader in hushed, nervous tones.

They told of a chairman who was falling apart. He wore unwashed clothes. He rambled about the old days in Beirut.

Then he was gone. Poisoned with polonium, as Swiss scientists all but confirmed this week after a study of his exhumed bones. But that’s only the start of the tragic tale of Arafat’s death.

For almost a decade Palestinian leaders have sought to avoid acknowledging that the symbol of their resistance to Israel was poisoned. Now they face a new challenge: to escape the inescapable conclusion that they themselves administered the poison.

The deadly tensions that would ultimately kill him were created by Arafat himself. He was a larger-than-life leader whom no novelist would dare to fashion. His regime consisted of a cast of surreal Dickensian characters: brilliant thinkers, wily money-men and desperate rogues. He set his favorites against each other, like gladiators in an arena where weapons were never far from reach.

The Palestinian Authority had collapsed around Arafat as the violence of the intifada swept 3,000 of his people to their deaths and drew Israeli tanks into every town and village. To the dismay of those around him, Arafat chanted daily about the “millions of martyrs” he expected––though in reality by the time he died, Palestinians had ceased to court death and were hunkered down for the end of a rising they acknowledged was a mistake.

“He’s always talking about the old days in Beirut, when he was in his bunker,” one of his police chiefs told us. “He thinks this situation is the same.” But someone knew how different, how desperate the situation was. That the Palestinians needed a different kind of leader if they were ever to achieve freedom.

And for that, Arafat had to go.

A Palestinian commission of inquiry under Tawfiq Tirawi, the former West Bank intelligence chief, was set up immediately after Arafat’s death, but its work ended less than a year later with no conclusions. People close to that investigation have told us they were shut down when they started to suspect the truth.

Four years later, Tirawi was appointed to head a new investigation. So far, he has been far from diligent.

It wasn’t until 2011, far from Tirawi’s desk, that the question of Arafat’s poisoning finally came to be investigated.

A French murder inquiry began after a programme broadcast in July 2012 by Aljazeera TV. At their prompting, Arafat’s wife Suha turned over some of his clothes and personal items to a Swiss research laboratory. The institute told her there were traces of the rare radioactive element polonium-210 on the late leader’s clothing and toothbrush. Polonium is a chemical element with the atomic number 84 that occurs in minute traces in the natural environment but is also produced by nuclear reactors

You only need to ingest or inject a few milligrams of polonium to be headed for the big sleep. Once inside your body, the short-range alpha particles attack any organ close to them, effectively eating you away from the inside by bombarding them with radiation energy. It takes effect within hours and is fatal within a few days.

Most Palestinians prefer to think Arafat was assassinated by Israel, whose officials have rubbished this week’s Swiss findings with a vehemence that courts suspicion. But what is clear is that people close to Arafat who sought to protect him –– his Jordanian doctor and his longtime bodyguard, for example –– were pushed aside by others in his close circle. Then, according to Fahmi Shabaneh, a member of the investigation that was closed down in 2005, after Arafat’s death all the medicines and medicine bottles were removed from the his quarters in Ramallah.

If Tirawi now pursues his investigation to its inevitable conclusion, the chances are that it will extend to the very heart of the upper echelons of the Palestinian leadership. The revelations could prove as poisonous for Palestinian politics as polonium-210 was for Yasser Arafat.

Who Poisoned Yasser Arafat? The Palestinians.