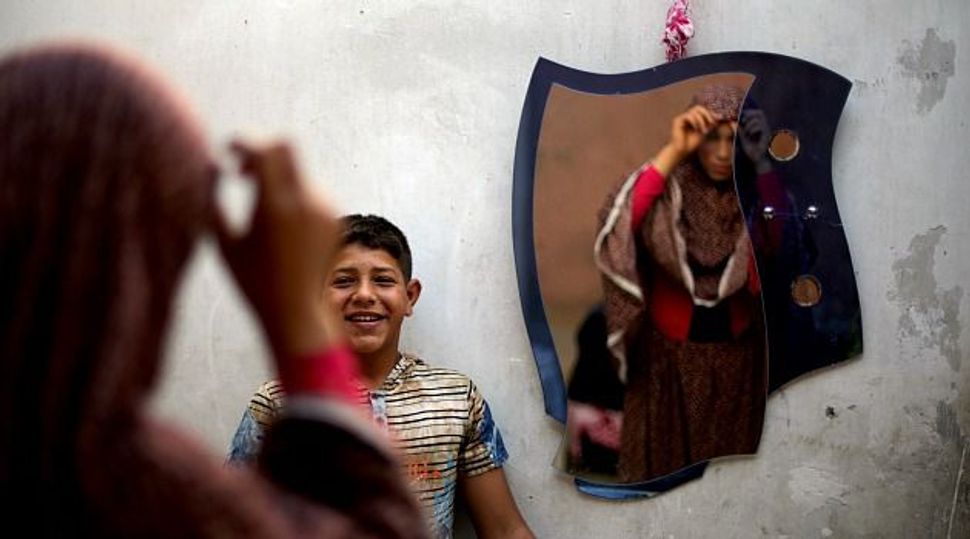 Gaza Dreams: A Palestinian teenage couple celebrate their marriage. Could the crushing poverty and growing isolation of the Hamas-ruled enclave offer an opportunity for a peace breakthrough? Image by getty images

The wedding photos tell a startling story: a Palestinian bride and groom, just 14 and 15 years old, respectively, tie the knot in a small village in the Gaza Strip.

The half dozen images included a few lines of impressionistic commentary from the Reuters shutterbug who took them. It quickly began to make the rounds in social media and the evocative portraits probably made as much of an impression on the international public as any story to come out of the impoverished coastal slice of land in recent months.

It’s a tragedy that the international media is maintaining an unofficial blackout on the dramatic events taking place in Gaza, with the exception of such so-called human interest stories. In fact there has been little coverage of the strip since Israel’s conflict with its Hamas rulers last fall. The overthrow of Egypt’s government, the bloody civil war raging in Syria, and the peace talks lurching forward between Israel and the leaders of the Palestinian Authority in the West Bank have also distracted attention from Gaza.

But it is a monumental mistake for the international community, the U.S. and even Israel to ignore Gaza.

Beyond the steady trickle of deaths that result from the unceasing Israeli aggressions from land, sea and air, human suffering is dramatically increasing amid a continuing blockade and a new crackdown imposed by the new rulers of Egypt, who view Hamas with deep suspicion due to its deep alliance with the now-deposed Muslim Brotherhood.

Perhaps just as importantly, the extreme isolation in which Hamas finds itself right now provides a historic opportunity for the international community — and even Israel — to explore ways to engage constructively with it. That could offer benefit of all parties, including an improvement in the conditions of Gaza’s 1.6 million people, security for Israelis living within range of rockets fired by Islamic militants, and a chance for a longterm truce or other agreement that would allow both peoples to live in peace.

The extraordinary deterioration in conditions in Gaza started more than a year ago with a campaign orchestrated by anti-Muslim Brotherhood media in Egypt to demonize Hamas. It blamed them for many of the troubles that the country suffers and denounced a collusion between the Muslim Brotherhood and Hamas.

This media offensive bore fruit last summer with the ouster of President Mohammed Morsi, the Muslim Brotherhood leader. Since then the new military Egyptian authorities have been concentrating with much fanfare on smashing armed groups in the Sinai Peninsula and the tunnels that connect it to Gaza leading to a strict closure of the territory. As a result people’s lives in this Mediterranean strip have deteriorated drastically.

Gaza Palestinians are going through some of the darkest days since an international boycott was imposed on Hamas after it won Parliamentary elections in 2006. Dark is quite the apt adjective since the electricity outages have reached unprecedented levels. Also the rise of the price of petrol—which has more than doubled—is compounded with the almost complete lack of employment opportunities, as well as the inability to leave this territory.

I recently spent three weeks in the territory in which I lived for almost two years during the second intifada, have visited regularly and followed closely since. I have been reminded in almost every conversation that existence is unbearable.

Vehicles in Gaza are often reduced to running on vegetable oil and butane gas, actually cooking gas cylinders that are being fed into Jerry-rigged engines. The fumes together with the dust-heavy air have made my eyes permanently irritated. The dirt and disorder of Gaza’s streets is also an eyesore.

“So, is Gaza beautiful?” I was asked daily multiple times, with a heavy dose of sarcasm. It’s a reminded of how painfully aware Gazans are of their miserable living conditions.

The inhabitants of the Gaza Strip are suffocating — and Egypt and Israel have thrown the keys into the sea. This territory is being subjected to the strictest of de facto sanctions, with the complicity of the international community.

For now, the Hamas government has done what it could to stop militant organizations from firing rockets against Israel, like the volleys that provoked Israel to launch the one-sided eight-day war in 2012 that killed 158 Palestinians and reduced swaths of Gaza to ruins. But if the blockade continues with this intensity, something is likely to snap. And the last thing Gaza needs right now is another massive Israeli military offensive.

The argument that the closure is putting pressure on Hamas to either change its ways—renounce violence and recognize Israel — or force people to make room for an alternative are misguided. It is true that many Palestinians are increasingly frustrated with Hamas’ rule of the strip, however, it is doubtful whether this is anywhere near a critical mass. Beyond the existence of large powerbase of devotees, the lack of a credible enough alternative to Hamas as well as its own physical control over the territory and its people, preclude the possibility of change.

In fact, the toppling of Hamas — only conceivable with external support — would unleash the more uncompromising organizations that Hamas is already struggling to suppress.

As it has been said many times before, the Islamic movement is not going to disappear into thin air and there is no possible solution to the Israeli-Palestinian conflict without it. The dialogue by the US and the EU in Egypt with its intellectual progenitor, the Muslim Brotherhood, in fact provides a model to follow and for Hamas in particular to behave as a political party rather than a militia.

The Brotherhood was once seen as an extremist and violent group, to be suppressed not talked to. Whatever one’s views of Morsi, his brief rule demonstrated that the Brotherhood’s rhetoric did not prevent it from continuing the alliance with the U.S. or taking any steps to undermine the Camp David peace pact with Israel. Hamas need not be any different.

Before such a historic dialogue is launched, the siege of Gaza, must be lifted. The punishment of more than 1.6 million Palestinians cannot be an end in itself. It must be stopped now, in the name of all of our shared humanity.

But what chance is there of that happening when the evocative images the world gets of Gaza is of teens getting married, a story which tells us nothing about their wretched lives and what brought them there? It only serves to further dehumanize Gaza residents and as such stops all of us from searching for ways to attenuate extraordinary suffering — and seek a shared path forward for Palestinians, Israelis and the world.

Jose Vericat is a PhD candidate at Oxford University who has lived and work in the Middle East for more than a decade, as a reporter and a spokesperson for two EU security sector reform missions in the Palestinian territories.