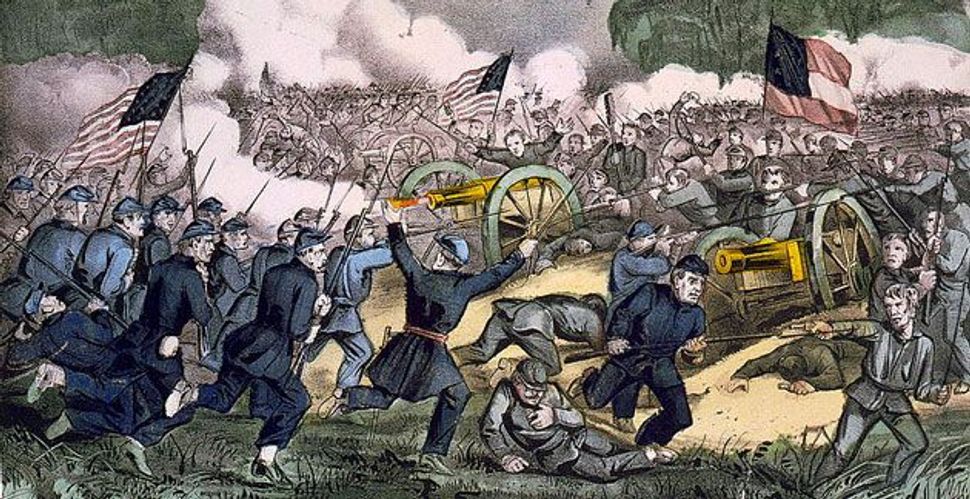 Exactly 150 years ago, President Abraham Lincoln said: “The world will little note, nor long remember what we say here, but it can never forget what they did here.”

On its anniversary, the Gettysburg Address, which is often considered the most important speech of American history, is anything but forgotten: Documentary filmmaker Ken Burns launched a mass participation project, in which he invites Americans from all walks of life to film themselves while reciting the Address, and upload the video to the project’s homepage.

More than 300 videos are online already, which include the performances of around 60 prominent people. There are the five living ex-presidents; Bill O’Reilly and Rachel Maddow; giants of business such as Bill Gates; and celebs like Stephen Colbert and Uma Thurman.

Stephen Spielberg, Senator Chuck Schumer and Rabbi Peter Rubinstein are a few of the several notable Jewish figures who have joined in.

Burns came up with the idea for the Learn the Address project while filming a documentary for PBS at the Greenwood School, a boarding school for boys with learning difficulties, which holds an annual competition in which the boys memorize and recite the Address. Burns observed the feeling of satisfaction and accomplishment among the boys that followed successful memorization and thought he could turn this challenge into something bigger.

“Mass participation does the same healing like singing in church,” Ken Burns told the Forward. “We are such a fractured society. As a famous historian [Arthur Schlesinger Jr.] said, there is too much pluribus, and not enough unum.” In addition to doing something together, he said, participants get access to “the most important speech of all of American history.”

This is why Burns and his team reached out to people from both political parties and all religions to participate. “Our publicist said, I want to reach out to the Cardinal [Timothy Dolan], and I said, I want to have a rabbi, too,” Burns said, referring to Reform Rabbi Peter Rubinstein. He added that they were “on the verge” of having an imam.

Among the most moving entries is the video by former Rep. Gabrielle Giffords, who is still recovering from being shot and speaks the opening lines herself with slightly slurred speech. For the ending of the address, she stands with a group of people at the U.S.-Mexico border, reciting the famous words, “That government of the people, by the people, for the people, shall not perish from the earth.”

Burns himself dubbed the speech a “Declaration of Independence 2.0.”

Burns, whose wife is Jewish and celebrates both Jewish and Christian holidays, said that the best Christmas present he ever received was his then 12-year-old daughter Sarah reciting the Gettysburg Address to him on the early Christmas morning of 1994.