What’s Wrong With These Selfies? Everything. 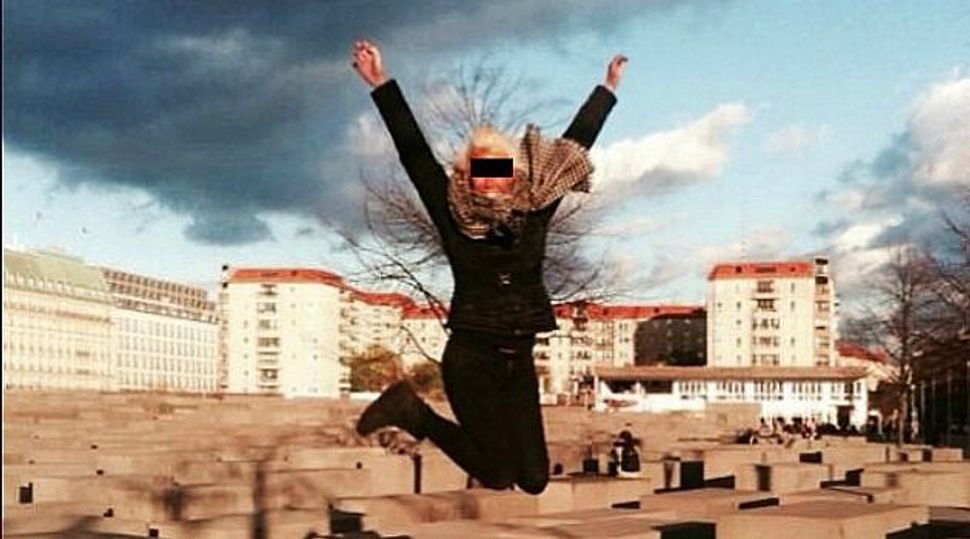 There are many positive things about social media. Selfies, or photos of themselves, taken by young people at Holocaust sites and memorials are not among them.

The German version of Vice magazine collected and published a bunch of these totally tasteless Instagram posts to drive home the point. Don’t read German? No worries. You just need to know how to read pictures—and, of course, also hashtags—to understand just how offensive this stuff is.

Check out the one of the girl giving two mitten-clad thumbs up at Auschwitz-Birkenau. “Thumbs up if you’re chilly willy #krakow #poland #auschwitz # birkenau #tour #travels #holidays #chilly #willy #ww2 #worldwar2” is how she tagged it.

There’s also the one of the girl who lined up her photo to make it look like a Star of David was growing out of her head. “#juden #arbeitmachtfrei #treblinka #zyklon B #feelgood.” Hey, don’t we all feel good when visiting sites of mass murder?

How about the one of a couple of guys “#chillin in #dachau,” or the one of the girl in a mini-dress posing at the Berlin Holocaust Memorial making sure everyone notices the important stuff—the “#chelseaboots”—she’s wearing.

Despite how absurd this stuff seems, it really is happening. Samantha French, a 20-year-old New Yorker studying at the University of Sussex in Britain reports that she saw people taking these kinds of photos while visiting Auschwitz-Birkenau in October 2012.

“…I saw a few tour groups just for school kids in which they were all taking pictures of themselves smiling in front of just about everything they saw, from the display of artificial limbs that had been recovered in the camp, to the wall in front of which many prisoners had been shot execution-style, to actually inside what remains of the gas chamber (despite a clear sign outside banning photography within the building),” she says. “In my own tour group, we had a couple who I think might have been Scandinavian who again did not put their cameras away throughout the entire tour.”

“In short, I think it’s disgusting,” French said. But, having studied the effects of social media, she isn’t surprised by this disturbing trend. “It is so easy to sway what people think of something just by joining a conversation about it on social media, and I think really that’s why this trend of people Instagramming photos of themselves by Holocaust memorial sites has become okay,” she explains.

“If one 12 year-old sees her friend do it when she goes to visit a memorial, she’ll think it’s acceptable to do that, as well, and so the snowball gets rolling. It’s just unfortunate that the people who know that making light of such serious issues is not okay aren’t as present in social media as kids with poor judgment.”

They may not be active on Instagram, but there are plenty of serious adults working with young people visiting Holocaust sites. This shocking trend is new to some of them.

“This is the first time I’ve heard of this,” says Jewish educator Devora Greenberg, who coordinates the Poland trips for Ramah Seminar

Greenberg reports that she sees the hundreds of Jewish teenagers she works with being nothing but respectful while at the sites. “First of all, this is a self-selected group of kids who want to come to Poland, and many of them have personal family connections to these places,” she says.

Beyond that, Greenberg says that the Ramah staff works with the teens ahead of time about being in the right mindset for these visits. “These are teens, so we can’t expect them to be serious all the time, but they know what is appropriate behavior and what isn’t. We work with them on how to switch tone and prepare themselves mentally for the experience.”

Sophie Parker, an 18-year-old Elon University student from Palo Alto, California went on March of the Living: The West last April. As she recalls, everyone took many photos, but “no one took silly pictures or selfies.”

As Parker sees it, social media is here to stay, but that doesn’t mean that young people shouldn’t exhibit some self-control when facing history and themselves. “I think technology makes it harder for people to live in the moment and understand how important these memorials are,” she says. “I hope people can put aside their technology needs to fully understand where they are and its importance.”

“What’s wrong with this picture?” is a something the youngest of children play as part of their preschool curriculum, but it looks like teenagers could use a refresher course in it. Many of them don’t seem to get that visiting Holocaust sites is not a game.

What’s Wrong With These Selfies? Everything.