On Thanksgiving, Confronting Our Country’s Bitter Past of Slavery 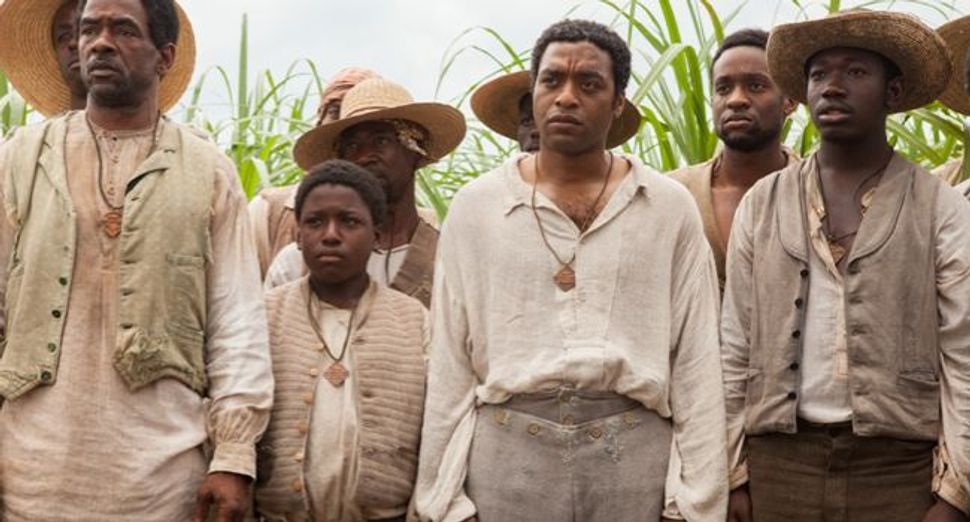 “A person is obligated to see himself as if he were leaving Egypt.”

This instruction from the Talmud may not seem timely at the moment, as American Jews prepare to celebrate the conjoined holidays of Hanukkah and Thanksgiving rather than Passover. But thanks to the visceral, devastating film “12 Years a Slave,” we have a new opportunity to live out this experiential teaching as never before.

As reviewers have unanimously opined, “12 Years a Slave” is a masterpiece, and the early favorite for the Academy Award. Superficially, its plot is straightforward: An African-American man is kidnapped in 1841 and sold into slavery, where he languishes for twelve years. And all of us know the facts of American slavery, just as Jews may know the facts of the slavery in Egypt — dimly.

But map is not territory. And unlike any film before it, “12 Years a Slave” frankly, unsparingly, unsentimentally depicts the everyday realities of what slavery actually was. The result is devastating, and enraging. The film does not wallow in brutality (as, say, Mel Gibson’s films do) but it does not flinch from it either. Characters we come to love are mercilessly whipped, beaten, driven to despair — and all the while, prim Southern men and women go about their business, dancing and dining in luxury.

Like the Nazis (and of course, I make the comparison advisedly), these white Americans are neither inhuman nor monstrous; that would be too easy. No, they are all too human, faithful to a convenient ideology that regarded slavery as divinely ordained, and black people as less than human. They are not blinded: they see clearly, and have a rational way to understand their outrageous actions. That is what evil is.

Most of us, on the other hand, are blind. Not by malice, necessarily — we simply do not see, or wish to see, how our country was built, and on whose backs. “12 Years a Slave” does not spend any time on politics, but the inescapable reality is that ours is a country built on stolen land, genocide, and the brutal enslavement of human beings.

As someone who grew up in the South, I left the theater particularly outraged at the friends I grew up with who flew the Confederate flag and displayed the casual, everyday racism that was common in the Florida of the 1980s. This is not to demonize all Southerners — but to correct the fictitious nostalgia of that other masterpiece of the South, “Gone With the Wind.”

In Jewish tradition, the point of remembering the slavery in Egypt is not to dwell on why stuff keeps happening to us, but, in the words of Exodus 22:21, “You shall not mistreat a stranger, nor oppress him: for you were strangers in the land of Egypt.” The reminders of the past are meant to inspire present action. And what the bitter herbs of the Seder are meant to do — make that past real — “12 Years a Slave” does in ways the Biblical writers could never have imagined.

Which brings us back to Thanksgiving. I wonder if we American Jews have really learned the lessons of these shared pasts: our own distant memory of slavery in Egypt, and the quite recent experience of African American slavery here in America. Are we living out the mandate to not oppress the stranger, in our public and private lives?

As we give thanks for the blessings of America, it’s nice that Jews can now get into the country clubs once barred to us, but dare we forget that those clubs are built on ethnically-cleansed land, and that our golfing partners may be the descendants of slaveholders? Is that who we are? Now that we, too, enjoy white privilege and the comforts of being relatively free from discrimination, have we conveniently ignored the history and legacy of slavery? Have we grown so comfortable that we can now side with the political party of cutting food stamps, shredding the social safety net, and claiming — as the conservative wing of the Supreme Court did last summer — that the sickness of racism has been cured?

Ironically, those delusions are belied by the deluded themselves. According to a January 2013, poll 64% of Republican voters believe that our first African-American president is “probably” hiding important information about his background, religion, or place of birth. Even in the White House, even in 2013, to many people, African Americans seem less than fully American, less than fully “one of us.”

I have preached more in this column than “12 Years a Slave” does in its two hours. It is a film by master storytellers, not scolds. You owe it to yourself to see it — not out of guilt, but precisely out of thanksgiving. This was the price others paid for our American dream, and if we are privileged to give thanks, we are commanded also to remember.

On Thanksgiving, Confronting Our Country’s Bitter Past of Slavery