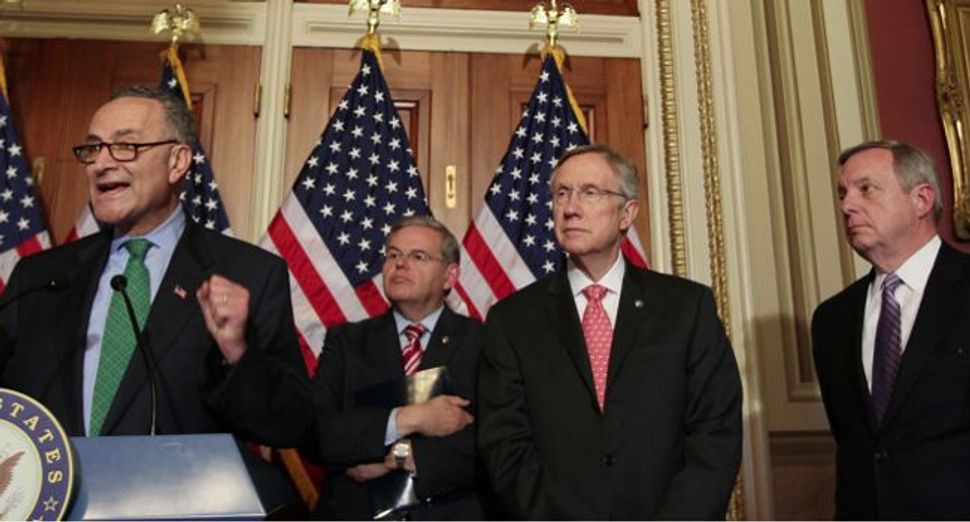 Staying Mum: Senators Schumer, Menendez, Reid and Durbin are some of the Democrats who have not been outspoken about the Iran deal. Image by Getty Images

If there is one so-far unexplained mystery about the agreement with the mullahs in Iran, it is this: Why are Senate Democrats so silent?

This is, after all, President Obama’s biggest diplomatic overture ever. Right or wrong, nothing else he does overseas will be remembered or noted with as much attention. Normally, a party’s leadership will stand behind a president in his moment of diplomatic achievement. Not this time.

If I were working political outreach for the White House, that would worry me a great deal. Right now, the president needs some vocal supporters, and so far, beyond the peacenik caucus, he isn’t getting any.

What he needs are some Senate Democrats — those sober, trusted familiar faces — to come to his defense: senators Chuck Schumer, Ben Cardin, Robert Menendez, Tim Johnson, Mark Warner and, most of all, Harry Reid.

So far, they are largely mute. Schumer and Menendez have even criticized the pact, though they have not openly said they would oppose it.

What does this relative silence mean?

If you think it is acquiescence to a diplomatic policy that they don’t actually believe in, you could be right. With a simple stroke of legislative action — something they have the ability and votes to do — they could pass a new round of sanctions on Iran and completely undermine the administration’s efforts.

Yet today, such a sanctions bill would completely scuttle the Geneva agreement. Even if such sanctions were made conditional on what Iran does during the next six months, the mullahs would probably protest that such a bill is like holding a gun to their heads. And who negotiates with a gun at his head — right, Mr. President?

Ultimately, these senators may not care if they get labeled as spoilers. After all, they want to be in Washington long after Obama leaves the White House. They cannot be the senators who lay sleeping as Iran puts the finishing touches on a weapon designed to complete Hitler’s work. These are the men and the women, after all, who are on a first-name basis with most of the board of AIPAC.

Will silence really be their only response to this bad deal?

Quite possibly. But staying silent may be understandable, from their point of view. Consider these political realities:

First, it would be political suicide for a Democrat to support any action but a diplomatic overture. If there is one thing that the mullahs have routinely gotten right, it is the assessment that the Democrats either in the White House or in Congress were never going to “go first” with the military option. All the bravado of hawkish-sounding Democrats never amounted to more than symbolic votes.

Second, the only way to strip away the gauzy cult for diplomacy that exists on the political left is to force it to confront reality. If you’re a Senate Democrat who believes there will never be a lasting diplomatic solution with Iran, then it’s in your interest to help others see why. That means the hard work of assembling intelligence that catches the Iranians cheating.

Third, the primary base of support for Senate Democrats isn’t that concerned with Israel’s existential survival. Face it, half of Democratic voters are hostile to Israel. While that same half of voters aren’t necessarily in love with the mullahs, they do not necessarily take at face value the protestations of Prime Minister Benjamin Netanyahu. There is little political price to be paid in the Democratic caucus for being insufficiently interested in Israel’s security.

All of which means that the silence of Senate Democrats may be perfectly reasonable.

But let’s not mistake this silence with acquiescence. Remember, this is Washington we’re talking about. The only time someone doesn’t issue a press release or tweet out a thought, it’s because they don’t see the value yet. Silence is damnation without political energy.

The absence of support from Senate Democrats for this agreement is not due to sober consideration of the deal’s merits; it’s a careful calculation that this is a bad agreement, but one where the political benefits of opposition have not yet presented themselves. That will soon change. For if senators are sitting on their hands when diplomatic optimism is at its highest, you can be sure they will not be so reserved when reality sets in.

Noam Neusner is a principal with the communications firm 30 Point Strategies. He was a speechwriter for President George W. Bush. Follow him on Twitter, @Glutens