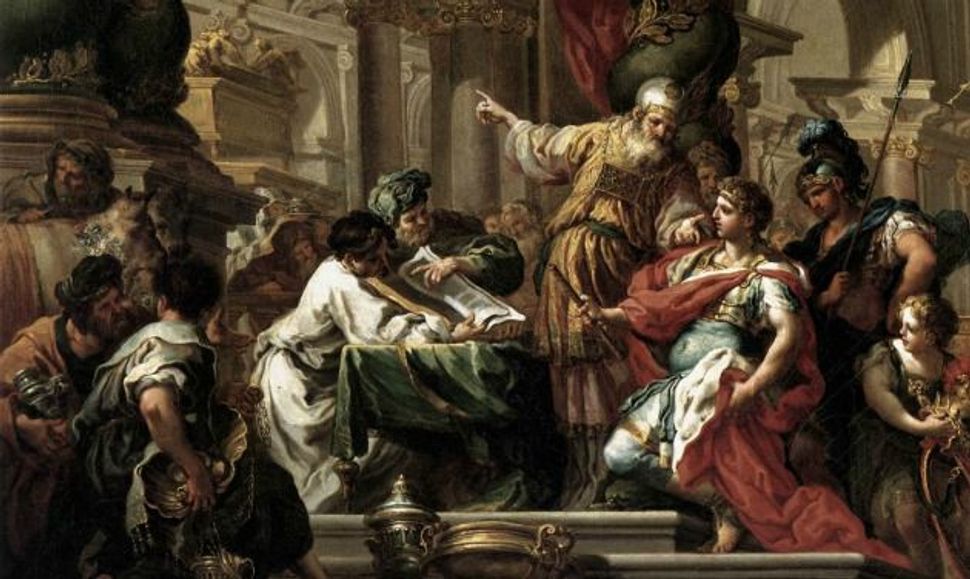 Sebastiano Conca: Alexander the Great in the Temple of Jerusalem Image by NYPL Digital Archive

What follows is a Forward editorial in celebration of Hanukkah from back in December 2004, when I was editor. I was rather proud of it then, and I think the message holds up pretty well. Down at the bottom is an extra treat: a cover version of “The Many and the Few,” Woody Guthrie’s epic retelling of the Hanukkah story, ending with the words “Thank God we’re the seed of the Jews.” Don’t miss it.

In trying, as we do every year on this page, to understand Hanukkah’s magical hold on the American Jewish imagination, it’s worth examining the holiday’s marvelous malleability, its Zelig-like capacity for embodying the very values that each generation needs it to uphold.

Yes, drowning out Bing Crosby is part of the holiday’s appeal, but only part. There is so much more to celebrate: national independence, religious freedom, rebellion against tyranny and — fast gaining in popularity — the battle of piety against assimilation. But which to teach first?

It wasn’t always so complicated. When the festival was first proclaimed by the victorious Maccabee warriors in the year 165 before the current era, it was a straightforward celebration of a military victory over a foreign occupier, a sort of early-model ticker-tape parade. That was coupled, of course, with a religious message: the rededication of the ruined Temple in Jerusalem, marking the restoration of the Jews’ freedom to practice their religion after a decade of Syrian-Greek oppression under the mad king Antiochus IV. In a combined display of triumphalism and pragmatism, the victors extended the festivities for eight days in order, so the contemporary narratives say, to make up for the eight-day Temple pilgrimage of Sukkot that should have been held two months earlier but was canceled that year by the war.

By the time the rabbinic oral law was codified in the Talmud 500 years later, Hanukkah had become something else. Having again lost their sovereignty, and plainly fearing that their new masters might take a celebration of guerrilla warfare the wrong way, the rabbis recast Hanukkah as a pacific festival of light-giving spirituality. They even discovered a miracle that the Maccabees’ contemporary accounts somehow hadn’t noticed: that little jar of oil that lasted eight days. Thus they prudently emphasized that God, not man, is the author of historical upheavals.

During the long night of oppression in medieval Christian Europe, Hanukkah effectively went underground. With no freedom to celebrate, Judah Maccabee became a children’s myth. The message of liberation was transcribed in code onto the dreidel, a gambling toy that subversively mocked the pious Christmas season all around.

In modern times, Jews living in freedom in Israel and America have managed, almost miraculously, to recapture much of Hanukkah’s original spirit. For Israelis, it celebrates the Maccabees’ military victory over foreign occupation. For Americans, it celebrates the eternal battle for freedom of conscience. As we do so often, each of our two great Jewish communities manages to capture the very half of the tradition that the other one misses.

It’s a sign of the times that the holiday has taken on yet another meaning in the last few years, every bit as creative as the earlier ones but unique in its insistence that it represents the exclusive truth. In this telling, heard more and more stridently each December, Hanukkah recalls not the Maccabees’ triumph over the Syrian-Greek occupiers but rather their defeat of the local Jews who had adopted the majority Hellenic culture of the Mediterranean region: theater, sculpture, philosophy, nude wrestling. By these lights, it wasn’t Syrian soldiers banning Torah study, raping Jewish women or slaughtering pigs on the holy altar that sparked the rebellion, but Jews working out at the gym.

To be sure, there’s nothing wrong with new generations creating new myths. But a little historical context is in order here. The Judean encounter with Hellenic culture began not in Judah Maccabee’s time but 150 years earlier, and by all accounts it was love at first sight. When Alexander the Great conquered Judea from the Persians in 333, he was welcomed by all the local parties with open arms. Both sides quickly learned that the Hellenic spirit of tolerance, pluralism and intellectual inquiry coexisted well with the passionate, argumentative culture of the Jews. Over the years masses of Jews in Judea and throughout the empire began adopting aspects of Hellenic culture while keeping the essentials of their religion, creating a syncretic Judaism that we would recognize today. Over time a two-way traffic developed; by the time of the Caesars, 150 years after the Maccabees, Jewish practices like Sabbath and kashruth had become all the rage among fashionistas in Rome and its provinces. Shades of Madonna.

No, it was not Hellenism that sparked the Maccabean rebellion. It was the increasingly ham-fisted reign of Alexander’s successors, the Ptolemies and Seleucids, that turned Jewish-Greek coexistence into a Judean political crisis. The Seleucid kings Antiochus I, II and III were decent enough fellows. It was Antiochus IV, “the Mad,” who tried so hard to throw his weight around in Judea that the countryside took up arms. Yes, there were corrupt, Hellenizing Jewish aristocrats who aped the oppressors and fomented intrigue. Yes, they made the Medicis look like the Cleavers. But they had been around for a century and a half. It took Antiochus IV to push the Maccabees’ buttons.

What, then, are the latest lessons of Hanukkah for our new times?

Well, first of all, there’s the danger of dynastic succession. It breeds arrogance, incompetence and intellectual laziness. The founder of the line is usually someone who earned the job. The trouble comes once you get to Henry VIII, Louis XVI or — well, enough said on that score.

Secondly, there’s this: Remember Alexander. The world’s greatest empire-builder, the living embodiment of the aesthetic, relativistic, body-loving, homoerotic culture that was Greece, is remembered to this day as one of the great benefactors of Jewish history. His very name is honored, almost alone among gentile monikers, as part of the canon of rabbinically approved names for Jewish boys, along with the likes of David, Moshe and Jacob. Remember that the next time someone tries to tell you that classical Judaism cannot coexist with a culture of homoeroticism, body-worship or show tunes. It’s bunk — ignorant, bigoted bunk.

Third, and perhaps most important, Hanukkah should remind us of the urgency of humility in the conduct of a superpower. Regional hegemons that decide to send off their armies to teach the lessons of enlightenment and tolerance to a band of bearded religious fanatics nearly always come to grief. The guys with beards always win.

Lastly, the final victory need not belong to Bing Crosby. Jews are free to create their own traditions, and America is ready to accept them. Irving Berlin gave us “White Christmas.” Adam Sandler gave us “The Chanukah Song.” A host of new acts from the Klezmatics to Arlo Guthrie are creating an entire new tradition of holiday music. We have the Hanukkah bush, Chrismukkah and the elegant tradition of Jews volunteering to feed the needy on Christmas Day so that Christian volunteers can stay home with their families. If all this is still too much, buy an iPod.

It’s a wonderful country, and a wonderful holiday. We hope yours has been all that and more.

Bonus: Here’s a cover version of Woody Guthrie’s epic Hanukkah ballad, ‘The Many and the Few’ (from his Coney Island years, when Woody was married to the Yiddishist radical Marjorie Greenblatt and raising a house full of Jewish children). It’s must-listening.