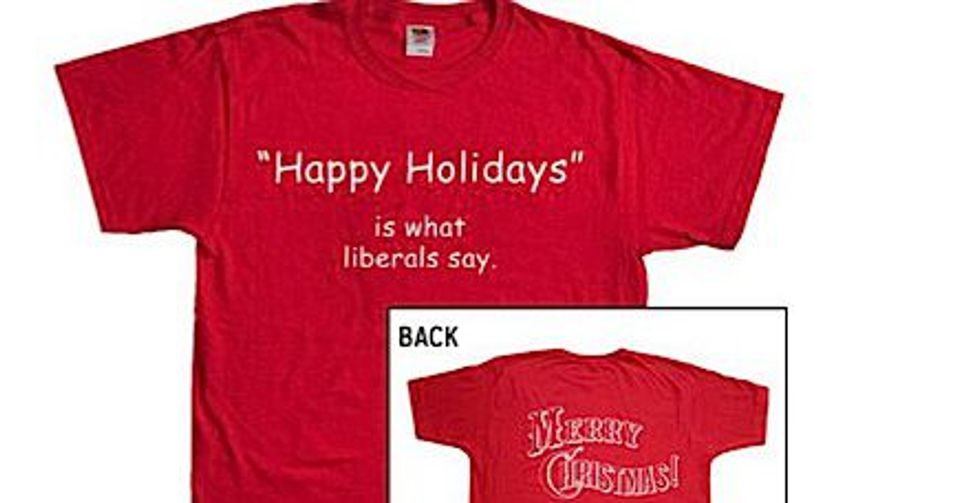 With Thanksgiving now over, it’s time for the annual battle over the “war on Christmas.” This year, it is playing out on Republican T-shirts.

The National Republican Congressional Committee is offering its supporters a holiday red T-shirt, fit just for the season.

On the front a sneering punch line reads: “’Happy Holidays’ is what liberals say.” On the back: “Merry Christmas”

That was enough to reignite the war.

The “Happy Holiday” greeting has been widely used in recent years as a way to include non-Christians in the holiday spirit. It has become the standard for presidential greetings (at times alongside the traditional “merry Christmas”) and is spread over storefronts and Hallmark cards.

Some on the right have taken issue with the receding of “Merry Christmas” from the public square. Rush Limbaugh, among others, blames liberal political correctness for driving out the explicit Christmas greeting. Former vice presidential candidate Sarah Palin devoted her recent book to “protecting the heart of Christmas” from those who wish to replace it with a religiously neutral blessing.

For American Jews, “Happy holidays,” marked a welcome adjustment in the season’s greeting vocabulary and therefore Jewish lawmakers were among the first to take on the NRCC T-shirt.

“Blast! And here I was going to get my husband one of these @NRCC shirts for Chanukah,” Tweeted Debbie Wasserman Schultz, the Florida Democrat who chairs the Democratic National Committee.

Blast! And here I was going to get my husband one of these @NRCC shirts for Chanukah —> http://t.co/58yNByw8Nr

The shirts, however, are no longer available on the NRCC website, Buzzfeed reported.

Was it because of the offense Jews and liberals have taken?

Not at all. They were simply sold out, a NRCC spokesperson said.

Instead, The Hill reports, the group is now offering a shirt that says: “I’m not afraid to say ‘Merry Christmas.’” It is selling for $39.99.