Does the Iran Deal Force Americans Jews To Choose Between Dual Loyalties? 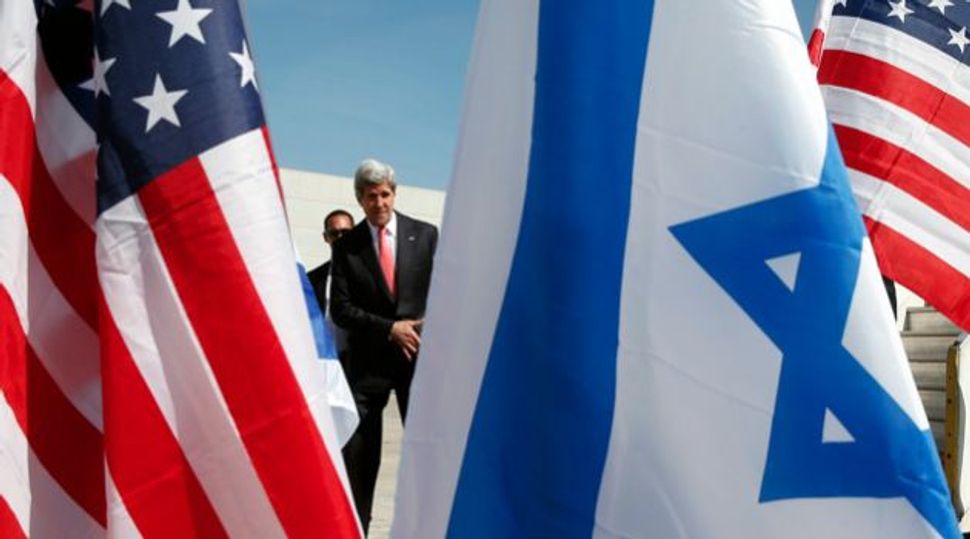 In Between: Secretary of State John Kerry arrives in Israel as part of his shuttle diplomacy in the Israeli-Palestinian peace negotiations. Image by Getty Images

Does anyone else find it strange that synagogues have American and Israeli flags on the bimah?

I’m not referring, here, to the question of whether political symbols belong in a sanctuary — although that is certainly debatable. I mean: Doesn’t it look a bit like dual loyalty? As if we pledge allegiance to two flags, rather than one?

The charge of dual loyalty — or disloyalty — has been an anti-Semitic canard for centuries. It occasionally erupts into violence, as in the Dreyfus Affair, or injustice, as some believe the Jonathan Pollard sentence to represent. But the accusation often just simmers ominously, until a crisis causes it to surface again.

One wonders if such a crisis is now upon us, as Israeli Prime Minister Benjamin Netanyahu openly scorns the interim agreement struck between Iran and an international coalition led by the United States. It’s hard to remember a time when Israel so openly defied the United States. Perhaps because there hasn’t been one.

So, whom should a loyal American Jew support? Israel or the United States?

For the moment, the question is largely hypothetical. It seems unlikely — as Jeffrey Goldberg recently wrote — that Netanyahu’s government will really attack Iran during the six-month period of this interim agreement. Especially because, as my colleague J.J. Goldberg has reported, Israel’s own generals basically support the deal. But suppose an attack did happen. To which of those flags on the bimah do we pledge our first allegiance?

In a sense, this shocking turn of events is quite new. Yet to close observers, it is but the most obvious manifestation of the divergence of interests between Israel and the United States. For 25 years, American administrations have tried to halt the Israeli settlement project, and for 25 years, they have failed. Carrots, sticks, loan guarantees, peace agreements — nothing has stopped the relentless march of Israel’s far right to colonize the West Bank.

This has not truly been a divergence between Israel and America. Rather, it is between America and Israel’s far right, a constituency boosted by a powerful Amen corner in the United States, and wads of cash from a handful of wealthy Jews.

To be sure, everyone agrees that an Iranian nuclear weapon is unacceptable, that the Iranian regime is unreliable and untrustworthy, and that the current deal is imperfect. And no one knows how the next six months will turn out. Likewise, maybe the Obama administration has, as in Syria, averted an unwinnable war — or maybe they’ve just postponed it.

But beyond that point, there is indeed a sharp disagreement between Israel’s right wing and, well, the rest of the civilized world. Israel’s hawks say no deal is a good deal. Yet they cannot explain how a military strike against Iran would actually work. The nuclear sites are scattered and hard to reach. The “collateral damage” would be horrifying. And after all that, it would only postpone the inevitable. Are the hawks blind? What does America, Europe, and Israel’s own military establishment see that Israel’s prime minister does not?

Really, it’s what Bibi does see: poll numbers. The current government rests on the base of the ultra-nationalists of the Beiteinu part of Likud-Beiteinu and Naftali Bennett’s Bayit Hayehudi (Jewish Home – forget those other Israeli citizens). Although it is incoherent strategically, Bibi’s tough talk plays well to these constituencies, whether they are religious Ashkenazim, traditional Mizrachim, or secular Russians.

Netanyahu also sees dollar signs. Israel’s political environment is massively distorted by American capital, mostly from Jews and Christian Zionists, which underwrites the settlement program, funds hawkish newspapers and websites, and pushes a “my country, right or wrong” policy here in the United States. (“My country” being Israel, of course.) Israeli political calculations are made within a system that’s been rigged, which is why the sums seem not to add up.

Really, then, this conflict is not between the two flags at all. It’s between a hawkish, nationalist constituency of Americans and Israelis…and everyone else.

Little is clear in the current state of play with Iran. Even the pact’s most ardent backers are sounding cautionary notes, and only a fool would predict where we’ll be come summertime.

But the current impasse has greatly clarified the stark choice American Jews now face. It is not between the two flags on the bimah, the Israeli and the American. Rather, it is between a hawkish and highly-subsidized nationalist ideology, and a messy, pragmatic, and realistic one. Perhaps it is between passion and reason.

Does the Iran Deal Force Americans Jews To Choose Between Dual Loyalties?