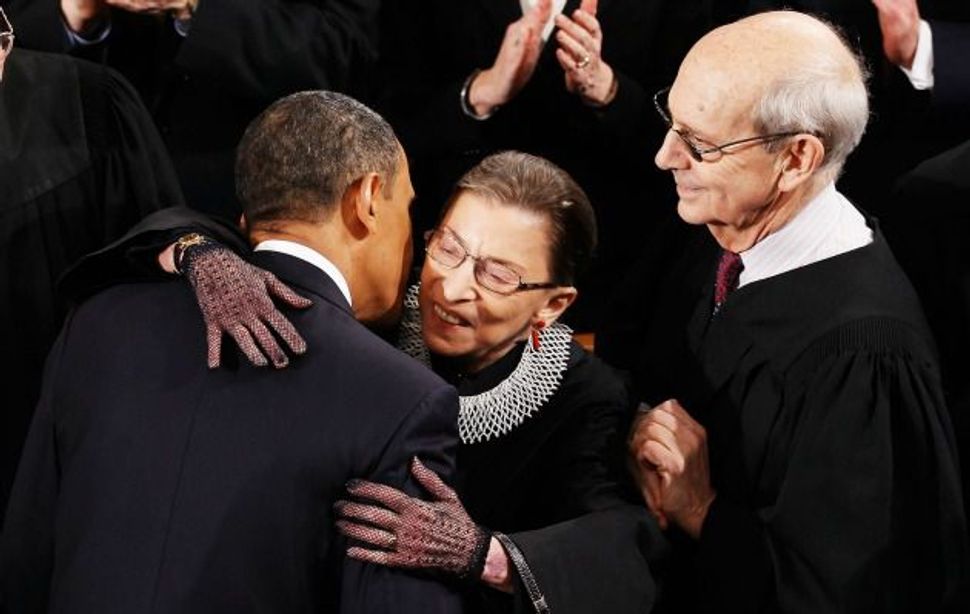 Ruth Bader Ginsburg, Stephen Breyer and the man who might replace them Image by Getty Images

With midterm elections 11 months away and control of the Senate a toss-up, pressure is mounting on the two oldest liberal justices, Ruth Bader Ginsburg, 80, and Stephen Breyer, 75, to retire and let President Obama name their successors.

You can tell the pressure is on because Ginsburg, at 80 the oldest justice and a two-time cancer survivor, keeps giving interviews and saying she’s not going anywhere. Supreme Court justices don’t usually speak to the press. In the last few months Ginsburg has spoken to Reuters on July 2, the Associated Press on July 26, the New York Times on August 25 and to the Washington Post magazine during a leisurely visit at her New Mexico vacation home in late September, for a lengthy profile published October 4. And the answer was the same every time: Nuh-uh. No way. As they say in her native Brooklyn, fuggedabout it.

A month later, the Times’ Adam Liptak asked her whether she worried that a Republican president might name her successor and tip the court sharply to the right. Her reply: “There will be a president after this one, and I’m hopeful that that president will be a fine president.”

“I love my job,” she added. “I thought last year I did as well as in past terms.”

She was pressed harder during her long conversation in September with the Washington Post’s Supreme Court reporter Robert Barnes. Here’s what he wrote:

Ginsburg understands politics but does not feel she faces a deadline to leave so that Obama, whom she admires, can choose her successor.

“I think it’s going to be another Democratic president” after Obama, Ginsburg said. “The Democrats do fine in presidential elections; their problem is they can’t get out the vote in the midterm elections

Things are getting hot, though. Political scientist Jonathan Bernstein, who writes a widely read blog on politics at the Washington Post, published a much-discussed article in Salon.com last March that was bluntly titled “Ruth Bader Ginsburg must go.”

Since then he’s stepped up the pressure. He blogged on July 5 and again on November 29 that Ginsburg and Breyer must both step down for the sake of liberalism’s future. Here’s what he wrote July 5:

The reality of the court, and the parties, these days is that Ginsburg and Breyer should know that a Justice selected by President Rubio or President Jindal or President Cruz is going to produce a very different nation than one selected by Barack Obama.

Ginsburg and Breyer were named to the court by Bill Clinton in 1993 and 1994, respectively, the seventh and eighth Jewish justices in the court’s history. Their nominations came at the tail end of an era when nominees to the high court were routinely confirmed by consensus—their margins were 93-to-3 and 87-to-9. With the addition of Elena Kagan to the court in 2010, three of the nine justices are Jewish, and what was once a symbol of Jewish and minority acceptance is now a matter of routine.

They were both urged very publicly to retire in 2011, in advance of Obama’s uncertain 2012 reelection, by Harvard law professor Randall Kennedy. The court and America overall had entered a very different era. Kennedy wrote in the New Republic that April that a “justice should have a deep, even passionate, commitment to his or her judicial philosophy and therefore act within his or her lawful powers to advance that perspective.” That meant resigning in time to let a Democratic president name their replacements, given the shaky odds at their advanced ages that they would survive through the eight years of a possible Republican successor.

Kennedy repeated the call this year. Responding to a question from Reuters’ Joan Biskupic, a day after her July 2 interview with Ginsburg, he said: “It seems to me that a justice should take into account the politics surrounding confirmation and not allow (an) opportunity to fall to a Republican.”

Breyer, five years Ginsburg’s junior, responds to the retirement question differently from her. He doesn’t respond. He hasn’t spoken on the issue. He gave a hint in 2010, though. Fielding questions in Los Angeles during a book tour that September, he repeatedly insisted that the justices were “not political,” according to The Nation’s Jon Wiener. Asked whether he believed the Roberts court was, like the Warren court, “a court with a mission,” he “offered a one-word answer: No.”

Ginsburg has been swatting away questions about retirement at least since the summer of 2010, as the first Obama midterms were approaching, his agenda seemed stalled on every front and the prospect of Democrats losing the Senate loomed large. That August she told AP’s Sherman that she wanted to stay on as long as Justice Louis Brandeis, the first Jewish justice. He retired in 1939 at age 82, after nearly 23 years on the bench. That would take her to April 2016, well into the term of Obama’s successor if he’d lost in 2012. She was 77 at the time.

Now she’s 80, and the ground is shifting. For one thing, the Republicans have an even chance of capturing the Senate next November. Anti-Obama partisanship has grown, not diminished. Their routine filibustering of Obama’s nominees is what drove the Democrats to approve the so-called nuclear option last month, eliminating the filibuster for all executive and judicial nominees except the Supreme Court.

If Republicans do capture the Senate next year, they’re widely expected to extend the new rule to Supreme Court nominees, crippling Obama’s chances of shaping the court for the future. The next 11 months could be the Democrats’ last chance for a long time to shore up the court’s liberal wing and prevent the court from becoming an all but permanent barrier to progressive policy.

As a reminder, this is the court that gutted the Voting Rights Act, crippled affirmative action and gutted campaign finance regulation in the Citizens United ruling. It’s the court that, with one more conservative on board, could finally overturn Roe v. Wade.

Why is she insisting on risking all that—essentially a dismantling of her life’s work—for another few years on the job? In part it’s because, as she told Liptak and others, she loves the job. She’s the senior member of the court’s four-member liberal wing, a position she inherited after John Paul Stevens retired in 2010. She functions as a sort of team captain, leading strategy sessions and assigning writing tasks. Once considered soft-spoken and shy, she’s now described as a ball of fire.

In part, though, it seems clear that her life on the court has become the center of her existence since the 2010 death of her husband Martin. They were college sweethearts, married 56 years, and were by all accounts partners and best friends as well as spouses. Biskupic reports that Ginsburg “mused” about the decision of the court’s first woman justice, Sandra Day O’Connor, to retire in 2006 at age 75 to take care of her husband, who had Alzheimer’s disease. “I wonder if Sandra regrets stepping down when she did?” Biskupic quoted Ginsburg as saying.

O’Connor doesn’t look backward. “I don’t regret it for a minute,” she said. “I felt in my case I’d had a fantastic experience, and my husband needed my care. For me, it was the time to do that.”

But that’s the difference: O’Connor left because she was needed at home. Ginsburg is reluctant to leave because there’s nobody at home to need her anymore.

O’Connor was quick to add that Ginsburg “doesn’t need my advice. She can figure that out. She knows her own circumstances and her own desires and her age and her stage in life. I mean, has she done the things she’d like to do here?”

Well, she may know all those things, but then again, she may not. She clearly enjoys her work. It seems, too, that she needs her work. But if the things she wanted to do there ever involved making America a better place, it could be that the best way to secure her goals is to leave now, before circumstances conspire to unravel them.