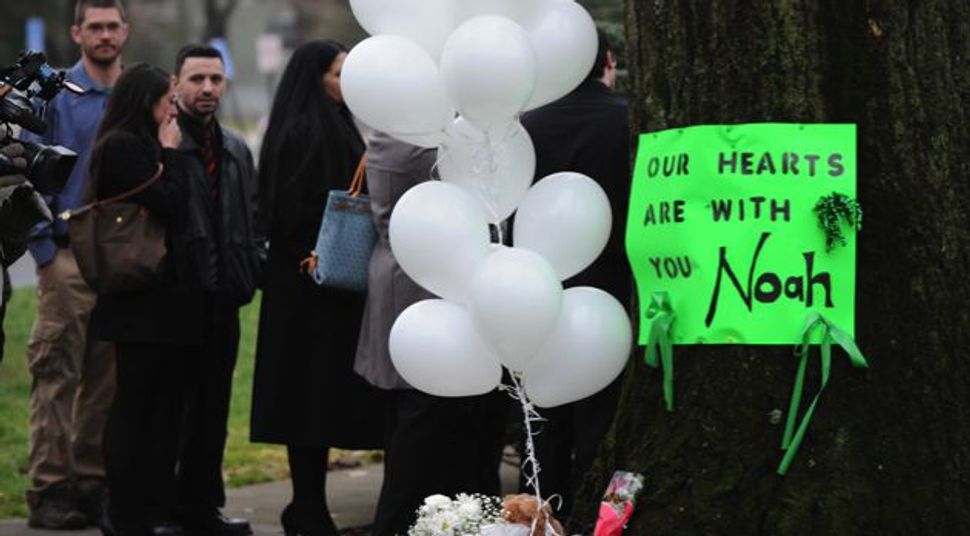 Last week, the Connecticut State Attorney issued a long-awaited report on the shooting at Sandy Hook Elementary School in Newtown. The report painted a clearer picture of the events of last December 14, and also provided details of shooter Adam Lanza’s life — his untreated “Asperger’s characteristics,” his love of Dance Dance Revolution and his obsession with the deadly school shooting at Columbine High.

What it didn’t include was the detail I needed to know: the number of times six-year-old Noah Pozner was shot.

In December 2012, the Forward reported that Noah was shot 11 times; the figure came from news reports available at the time. But about six weeks later, Noah’s father, Lenny Pozner, told me that the number was wrong. He said the incorrect detail had become a touch point for the Sandy Hook “truthers,” the conspiracy theorists that deny that the shooting occurred.

Noah had also become a symbol of that day. “My son was used as an example of the butchery, the horror,” he told me recently. “It created a lot of unnecessary focus on Noah and it was inaccurate.”

I spoke with my editors about Pozner’s concerns, and they felt that we needed to verify Pozner’s assertion with an official source. It wasn’t that we didn’t believe Noah’s father, but that we needed to adhere to journalistic standards, to do our own research before deciding whether a correction was merited.

But finding out that one small detail in the Newtown case was much more difficult, and took much longer, than I ever anticipated.

First, I called the Connecticut coroner’s office to see if it could verify the number. The office referred me to state police spokesman Lieutenant Paul Vance, who was handling media inquiries on Newtown. Vance told me in an email that his office had “NEVER” released any information regarding the number of shots. Nor could he release any information now, not until the police had made public its report on the Sandy Hook shooting, which would likely be sometime in June.

But the report didn’t come out in June. And the full document still isn’t out.

Last week’s report from the Connecticut State Attorney, it turns out, was merely a summary of the investigation. The state police will be releasing a several-thousand page report, they say, before the one-year anniversary of Newtown. The report is currently being redacted.

I realized that the state police might never give me the number I was seeking, so I reached out to Pozner and asked him, again, if he could help us verify the number of shots.

Pozner did have a medical examiner’s report, he said, but he did not want us to publish its contents. As much as he wanted the number 11 corrected, he felt it was important to keep the true figure private out of respect for the other Newtown families who’d lost children in the rampage. My editors and I discussed his request. On the one hand, we felt we owed our readers a clear picture of the brutality of Sandy Hook. But on the other hand, the number of shots didn’t alter the reality of what happened: Noah died, along with 19 of his peers and six adults in one of the worst school shootings in history.

We worked out an agreement: Pozner would share the medical examiner’s report with us if we promised not to publish the true number of shots. Once we verified that Noah was not shot 11 times, we changed the number to the word “multiple,” an adjustment made across the Forward’s web site with regard to our Newtown coverage.

As far as the Forward is concerned, one small question in the Newtown case has been resolved. But there are other major questions that remain: namely, how will our country prevent another Sandy Hook?