Searching for Religious Ritual in a $10 Bottle of Juice 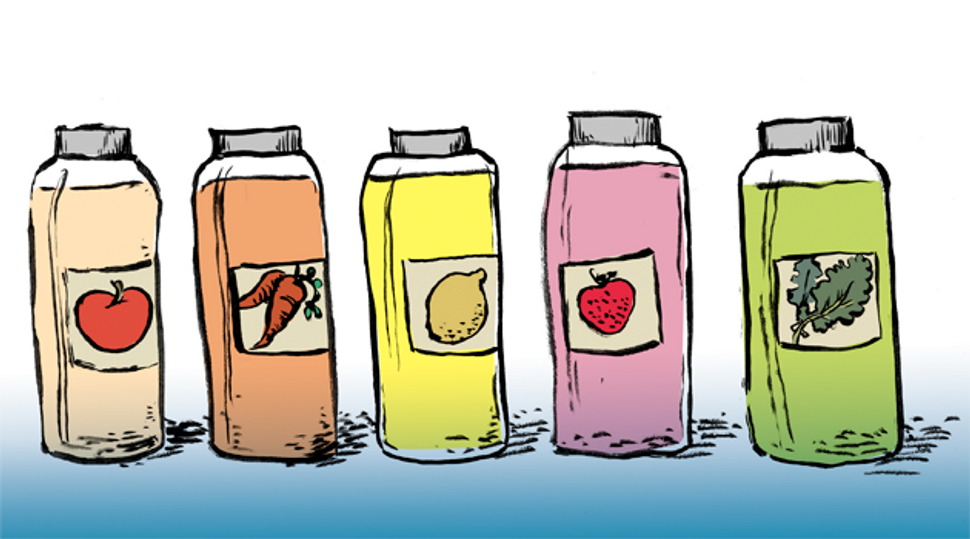 The East Village of New York City has long been a site of cultural defiance. It was home to massive communist rallies in the late 19th century, Boris Thomashefsky’s Yiddishe “Hamlet” in the early 20th century and then, eventually, the Beats and the punks.

Walk around the neighborhood today and you will encounter, more than misfits, more than artists, more than radicals… juice. Lots and lots of juice.

On Houston, on Essex, on Avenue A, between the vegan bakeries and the macrobiotic diners, are small stores dedicated exclusively to cold-pressing apples and kale, ginger and pineapple into cool and frothy beverages. Some buy these juices to supplement their diets, maybe for a post-Soul Cycle pick-me-up, while others use them as part of their juice-only fast, that diet most often referred to as a cleanse.

This is more than just a sign of gentrification. In the East Village and beyond, eating and drinking has become the preferred means for defying norms, for cultural and personal rebellion.

Today, food — what we eat, and what we don’t — is how we separate ourselves, challenge ourselves and define ourselves in relation to others; it is the preferred spiritual and ethical medium of our times. And nothing symbolizes this quite as well as the juice cleanse craze.

Juicing has become a big business, $5 billion big, in recent years, and counts everyone from Bill Clinton to Gwyneth Paltrow as its customers. There are more than 6,200 juice bars around the country, and major retailers like Starbucks and Campbell’s soup are investing tens of millions in what many still consider the next big thing.

These juices are not marketed as something as pedestrian as thirst-quenching or tasty. Instead they are presented as curative, capable of ridding one’s body of impurities, particularly for those who use them as meal replacements.

Inevitability, this rise in popularity has been met with a backlash. Both The New Republic and Slate have published widely shared takedowns of juice cleanses, contradicting claims made by their adherents that a week or so of a juice-only diet will lead to weight loss, fewer toxins or mental clarity. And an article in Marie Claire from earlier this year pointed out that for some, cleanses can act as socially acceptable covers for eating disorders.

These stories aren’t wrong. Juice cleanses, scientifically speaking, are basically rubbish. But to dismiss as silly or ultimately irrelevant the very unscientific, irrational motivations driving educated, wealthy people to make such strange decisions about what they ingest is surely missing part of the point.

The urge to cleanse is about far more than the desire to shed weight or display one’s status by way of an $11 green juice. It is also driven by the need to shape and limit the abundance of choices and temptations that we all encounter every day. Juice cleanses fill the need that people have, yes, even neurotic, wealthy women in Lululemon yoga pants, for old-fashioned religious staples like ritual, order, deprivation and ultimately, hopefully, transcendence.

We may live in secular times, but this doesn’t mean people have risen above magical thinking. Our need for audacious gospels laying out paths to a more spiritually and psychologically pure existence remains ingrained deep within us. Juice has given many just that.

For Jews, this particular use of food should come as no surprise. We have long used eating and drinking to draw lines between us and others, between yesterday and today, between our sinning selves and our better, fully atoned selves. The Hebrew word for fasting, tsum, means “to afflict the soul,” and kosher, or kashrut, translates to “pure.” Indeed, most mystical traditions, Jewish and not, include some element of fasting.

There are few of us for whom our relationship to food is limited to mere nourishment or pleasure. I myself have never kept kosher, or gone on a juice cleanse, but this doesn’t mean I am immune to the social, psychological and spiritual effects of eating and drinking.

Whether it is my repulsion to watching someone wash down a chicken dinner with a cup of milk, the solemnity of my empty stomach on Yom Kippur, or sharing a carefully prepared meal with my son, the act of eating is deeply entangled with my perception of who I am and my relationship to others.

The expectation that people behave rationally has long handicapped intellectuals striving to understand exactly why humans do what they do. Economists, political strategists, teachers, even spouses, still struggle to grasp why individuals would make decisions that go against their best interests. And yet, people continue to do just that, over and over again.

The juicing cleanse fad will eventually pass. But it’s clear that our need to wrestle with our appetites and seek transcendence — whether through religion or these new secular forms of food ritual — is much more deeply rooted than we’d like to admit to ourselves.

Searching for Religious Ritual in a $10 Bottle of Juice