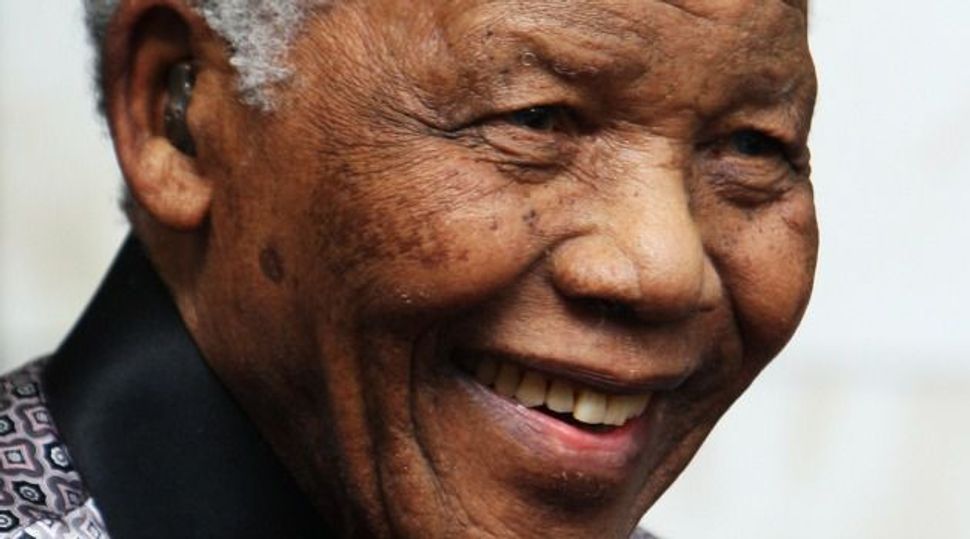 Controversial Hero: Nelson Mandela was undeniably a great man, but at times, his views made the Jewish community very uncomfortable. Image by Getty Images

Since Nelson Mandela’s death on December 5, my protests during his 1990 visit to New York have been characterized by many — including J.J. Goldberg on the Forward’s website — as radical and militant. Let me set the record straight: I consider Mandela to be a universal hero. The suffering he endured in prison for 27 years serves as a paragon of self-sacrifice for higher ideals.

Upon release from prison, he nobly reached out to the oppressive white community in a spirit of reconciliation. And after serving one term as president of South Africa, refused to run again, making room for other leaders.

But it is important for the sake of history that the Jewish community be honest in its appraisal of this iconic figure. Mandela was a man of greatness, but there were moments of great tension between him and his Jewish counterparts.

When released, Mandela embraced Yasser Arafat — the arch-terrorist who was responsible for the murder of countless Jews. And so, when then New York City Mayor David Dinkins announced a ticker-tape parade in his honor, I wrote to the mayor, telling him that I would have no choice but to protest Mandela because he had embraced Arafat, calling him “a fellow freedom fighter.”

A delegation of American Jewish leaders, anxious to head off a crisis, held a meeting with Mandela in Geneva. They reported that Mandela had expressed unqualified support for Israel, despite the fact that he did not renounce his support for Arafat. Those of the Jewish establishment felt this was enough, and made clear that they were ready to welcome him with open arms.

Citing this new development, Dinkins urged me to cancel my demonstration. Using words that some in the Jewish community viewed as a threat, he told the press that it would be “tactically very, very unwise” for any protest to take place. I would have liked nothing better than to step back from the protest, but given Mandela’s refusal to apologize for his support of Arafat, I could not. When someone of Mandela’s stature embraces Arafat, it sends a message that terrorism is legitimate.

We stood outside Gracie Mansion on the evening of Mandela’s arrival in the city, and the following day opposite City Hall during the ticker-tape parade, memorializing victims of the Palestine Liberation Organization’s terrorism — including American diplomats Cleo Noel and George Moore, murdered by the PLO in 1973, and Leon Klinghoffer, the elderly handicapped New York Jew who was thrown over the side of the cruise ship Achille Lauro by the PLO in 1985. Our refrain was simple but sharp: Embracing Arafat brings shame to the anti-apartheid struggle.

Soon after, Mandela appeared on “Nightline” and still referred to Arafat as “a comrade in arms.” He added that he would not question such a leader as Libya’s Moammar Qaddafi or Cuba’s Fidel Castro, both of whom, Mandela said, “support our struggle to the hilt.” While repeating that he recognized Israel’s right to exist, the leader of the African National Congress strongly rejected the demand that he condemn Arafat. Many Jews had helped in the anti-apartheid struggle, Mandela said, “But that does not mean to say that the enemies of Israel are our enemies.”

As it turns out, our activist group was not the only one to protest against Mandela. Soon after the “Nightline” interview, Mandela flew to Miami, where Cuban Americans strongly protested his support of Castro. While Cuban Americans were clearly unafraid to voice their displeasure with his embrace of Castro, I struggled to fathom American Jewry’s reluctance to protest his embrace of Arafat.

Looking back on those days, I do not feel sorry that I led those demonstrations. I do, however, feel deep, deep pain that it was necessary. I feel a profound connection to my black brothers and sisters, and pray that my actions were not misunderstood. On those days, I was standing up against one thing and one thing only — the embrace of Arafat by this man or any man.

As Mandela is buried, I join in lauding him for the extraordinary good that he did for the betterment of humankind. But no human being — including the great Mandela — is without flaws. As he led the legendary struggle against apartheid, Mandela still made the serious mistake of embracing terrorists and despots— a mistake for which no one, not even a great man such as he, should receive a free pass.

Avi Weiss is the senior rabbi of the Hebrew Institute of Riverdale, and is the founder of Yeshivat Chovevei Torah and Yeshivat Maharat.