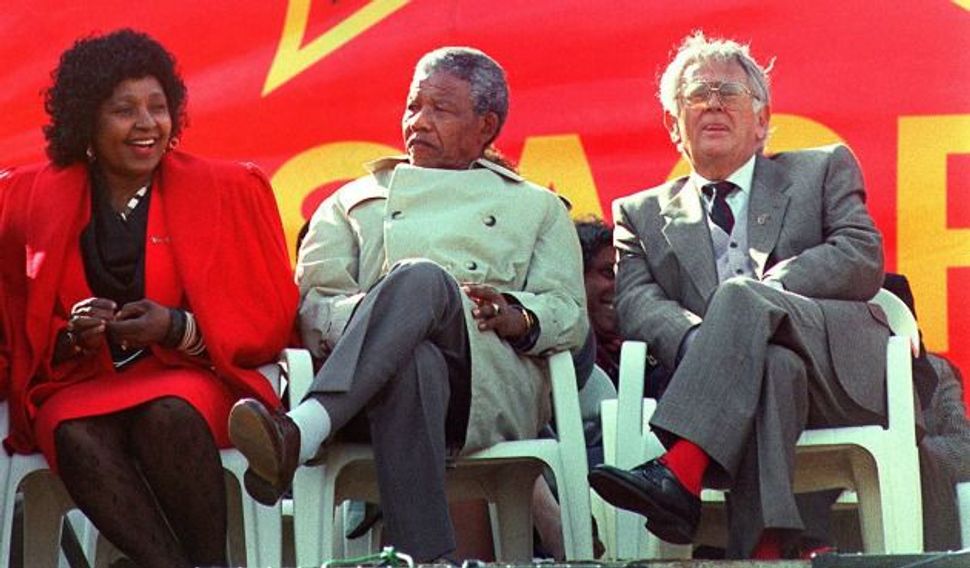 When I heard on Thursday afternoon about the death of Nelson Mandela at age 95, my mind was a jumble of complicated thoughts. I thought about the day I first learned about the South African freedom struggle, in the summer of 1960. I thought about my first sight of Mandela, when he visited New York in June 1990. I thought about another hero who died just a few days ago on a Negev kibbutz. It was all a single thought, a flash of images, there and gone in an instant. It took me hours to sort it all out. It’s beginning to make sense.

First of all, there’s Yehuda Paz. Founder and chairman of a Negev institute for Bedouin rights, he died November 28 at his home on Kibbutz Kissufim, at age 83. He’s probably best remembered, though, for the decades he served as director of the Afro-Asian Institute of the Histadrut. It was once world-renowned as a training school for trade unionists, anti-colonialists and anti-apartheid activists from throughout the Third World, beginning long before the Israeli government allied itself with the apartheid regime and continuing long after.

To be honest, I didn’t know Yehuda well, though several of my closest friends worked with him at the Negev institute and revered him. But I have very vivid memories of his Afro-Asian Institute. In fact, I remember the day I first learned about it. It was in August 1960, my first summer at Camp Habonim, the Labor Zionist summer camp (later renamed Camp Na’aleh). I was 10. I was sitting with my kvutza, my bunkmates, on a grassy hill under a big tree having Sicha, our daily lesson about Zionism, Jewish history and social justice.

The topic that day was freedom fighters. We learned about the one-armed Zionist hero Yosef Trumpeldor, and about the Haganah and Palmach and Yigal Allon and Yitzhak Rabin (yes, even then). And we learned about South Africa, where Jews and blacks were fighting together for freedom in something called the African National Congress. Ever since, I haven’t been able to think about the ANC without thinking of Trumpeldor.

Over the next few days we learned more: about the Warsaw Ghetto uprising and the illegal immigration boats of Aliya Bet. About the Sharpeville Massacre, which had happened just a few months earlier in South Africa and which taught us, we were told, that even today you have to be brave and fight for what’s right, as Trumpeldor did.

And we learned about the Afro-Asian Institute, founded that winter in Tel Aviv. Which sounds dull when retold, granted, but was rather thrilling at the time—one of our counselors had been at the Histadrut convention that voted to create it, had met African activists there and was full of stories about the freedom struggle. Over the next few days we learned about the anti-colonial movement. We learned about Ghana, the first African colony to win independence. Just before Shabbat, during Shirah, the daily song-learning time before lunch, the whole camp learned the Ghanaian national anthem. (I can still sing it.)

Over the next few summers we learned more. Visitors from South African Habonim told us how their counselors held leadership training seminars in the Swaziland “homeland” so they could discuss kibbutz and socialism without getting arrested. Every summer, our counselors returning from the movement’s kibbutz year-course had new stories about African freedom activists who shared their living quarters while studying at the Afro-Asian Institute. We learned that Israel was helping, training and funding freedom movements throughout Africa. We learned about Mandela and the Rivonia trial. We discussed the relationships between the Jewish fight for freedom, the African freedom movement and the civil rights struggle that was going on right then in America.

In the summer of 1964, campers were assembled to mourn the three civil rights workers murdered in Mississippi, Andrew Goodman, Michael Schwerner and James Chaney, two Jews and a black man. That December, during winter break, we gathered outside Washington for the annual East Coast teen seminar and heard from civil rights leaders about Mississippi Freedom Summer. By the time I finished high school, the Zionist movement had shaped me and my friends to see ourselves as members of the Jewish national liberation movement and part of a larger worldwide freedom struggle. At winter seminar in 1965 we decided we would start our own kibbutz after college. (We did. It’s still there.)

It was in college that the world started getting more complicated, as it’s probably supposed to. In June 1970, at New York’s annual Salute to Israel Parade, Habonim decided to march with signs and black armbands in memory of the four students killed at Kent State University days earlier. Somehow, Israel’s ambassador in Washington, Yitzhak Rabin—my childhood hero—was called in to stop it. Ugly words were exchanged. In the end, if I recall, there were armbands but no signs.

A year later, in the fall of 1971, a group of student Zionists from the around the country was assembled in New York to meet with Israel’s visiting prime minister, Golda Meir. It was a grand evening, until question period. A Brooklyn College student rose, identified himself as a member of Habonim and asked how an Israeli prime minister could endorse Nixon’s war in Vietnam. She called him a baby and told him to grow up. Then a CCNY student rose, identified himself as a member of Habonim, and explained that our movement—her movement—had raised us to dream of a better world. She told him that dreams were for children and it was time to wake up and join the real world. Now a student from Oberlin got up, identified himself as a member of Habonim and tried to explain that we lived on American campuses where the mood was different from Israel’s. She told him to get a haircut. I’m not making this up.

That night, our shlichim—Israeli advisers—spent hours in her hotel room pleading with her not to cut off Habonim’s funding. It was, after all, the movement in which she had grown up. Even if she was from the Midwest.

Moving to Israel after college, I began to hear about Israel’s switching sides in the South African struggle. At first I couldn’t believe it. I knew that most African nations had broken ties with Israel, some after the 1967 war, others after 1973. Still, the idea that Israel had simply moved over to the dark side seemed inconceivable. Even after my encounter with Golda.

Only gradually did the story come together. I fell in with a circle of South African olim in Jerusalem and learned about the government’s fierce repression and the fearfulness of the mainstream Jewish community. There were IDF officers among my teachers and mentors who explained the painful complexities of Israel’s military situation. I guess I started to get it. Years later, sadder but wiser, I returned to the States for a quick visit. Somehow I’m still here. You learn to compartmentalize.

By 1985 I’d figured out that I wasn’t going to be a kibbutznik and stumbled into journalism, figuring that if I couldn’t change the world, at least I could describe it. In March 1990, Nelson Mandela was released from prison. David Dinkins, newly inaugurated as New York’s first black mayor, announced that Mandela would be welcomed to America with a ticker-tape parade up Broadway and a welcome ceremony at City Hall. 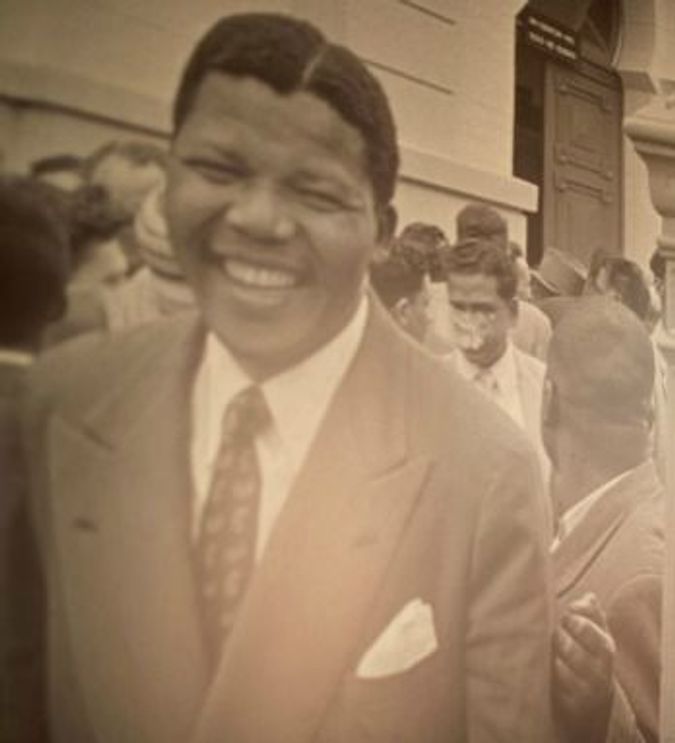 Mandela leaving the Old Synagogue, Pretoria, used as a courtroom during his 1958 treason trial. Image by Getty Images

Parts of the Jewish community were outraged. In the weeks since his release Mandela had shaken hands with Muammar Qaddafi and Yasser Arafat. The militant Bronx activist Rabbi Avi Weiss called for a protest demonstration opposite City Hall during the parade. Liberals, mainstream moderates and most everyone else pictured a public relations nightmare and serious, long-term damage to the fragile black-Jewish relationship.

Enter folk-singer Harry Belafonte, a prominent civil rights and anti-apartheid activist with strong ties to the Jewish community. He reached out for a Jewish delegation to meet Mandela in Geneva, en route to New York, for a ceremonial embrace. Mandela didn’t have a problem with it—he told anyone who asked that his closest white allies were Jewish. Besides, Israel had once backed the freedom struggle, before it didn’t.

But Belafonte had a problem: The Jewish delegation he’d asked for turned out to be all veteran liberals. He wanted someone from the center-right who would have credibility among would-be protesters. Abe Foxman stepped forward. There are all kinds of heroes.

Mandela was a larger than life figure. He was one of the very few world leaders who could truly speak to and speak for the global community. Not because he opposed violence—he didn’t, despite what Bibi Netanyahu said about him on Thursday. He was a co-founder (with [Lithuanian-born][15] Jewish communist leader Joe Slovo) of the ANC’s guerrilla wing, Umkhonto we Sizwe. He was imprisoned for terrorism. Only over time did the world come to see the regime as intolerable, and the terrorist leader became a freedom fighter.

No, his greatness was in recognizing the complexity of reconciling peace and justice. They’re not the same thing. He knew that to achieve a measure of both you must betray a measure of each. That there is a time to fight and a time to stop fighting. That to achieve both justice and peace, you must insist on a decent measure of justice and forgive a lot of injustice. That’s what Golda tried to tell us. That’s what I learned in Jerusalem. Mandela got that better than anyone. Most of our leaders don’t. So we ask, as Shlomo Artzi sang of Rabin and then of Arik Einstein: איפה ישנם עוד אנשים כמו האיש ההוא – where will we find another like him?