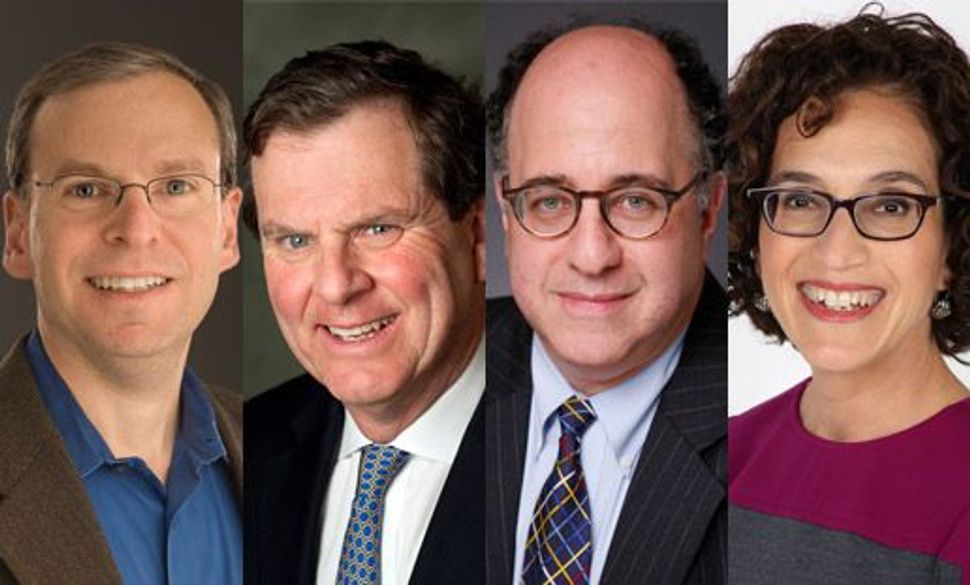 Well, I certainly never had that happen before. In years of moderating sometimes heated public conversations, never has a panelist just walked off the stage. But that’s what Commentary editor John Podhoretz did Monday night. And I’m still trying to figure out why.

Of course, I expected a feisty evening when the venerable 92nd Street Y asked me to moderate a panel about what it means to be “pro-Israel” (their words), with Jeremy Ben-Ami, president of J Street; David Harris, executive director of American Jewish Committee, and Podhoretz. And from the outset, it was clear that Ben-Ami and Podhoretz were going to disagree about everything, with Harris positioning himself — literally and figuratively — in the middle.

We talked about the latest controversy at the Swarthmore College Hillel, and who should or should not be invited to speak at a Jewish institution.

We talked about the results of the Pew Research Center study that American Jews are more critical of Israeli government policies than many “pro-Israel” leaders would like, and what that means.

Throughout it all, Podhoretz was firmly, even aggressively, disagreeing with Ben-Ami, and the back-and-forth between them became a little testy. This is the hardest part of being a moderator – trying to make the split-second judgements over when to step in, and when to allow the debate to run its course.

But then we turned to an audience member’s question about the decision announced today by the American Studies Association to endorse an academic boycott of Israel. And things got harder, still.

Ironically, everyone on stage, myself included, believed that this was a hypocritical and ultimately counterproductive action. But after saying he disagreed with the ASA vote, Ben-Ami segued into talking about Israeli government policies that, in his view, make it difficult for some Americans to believe Israel really does want peace with the Palestinians.

You’re blaming the victim, cried Podhoretz. Some members of the audience became enraged, and, mystifyingly, the Commentary editor encouraged them, challenging them to boo and hiss.

And then — honestly, it’s a bit of a blur, but this is what I remember — he started wagging his finger at Ben-Ami in a manner at once threatening and condescending. That’s when I stepped in, trying to rein in the argument, using my hands (I am known to gesticulate) to try to calm him down.

Instead, Podhoretz angrily said that I raised my hand at him and stormed off the stage.

I am, physically, much, much smaller than John Podhoretz, so he could hardly allege that I was intending to do him harm. More than that, I was the moderator, and he had a responsibility to be civil on stage and, at the very least, listen to my requests. I was stunned by what I can only describe as a temper tantrum.

So was everyone else. To the great credit of Harris and Ben-Ami, we continued the conversation for the allotted time, with a spirited debate about the lengths to which American Jews can and should speak up and about Israeli policies.

But the damage was done. The chair was empty. Yes, I made a joke at one point about “Elijah” but it is hard not to view this lopsided scene as an incredibly sad commentary on the difficulty of engaging Jews with vastly different views on Israel in civil dialogue.

Or maybe it was just about one rude, angry man.

How Much Do Jewish Charity Heads Make? Find Out!