Now They Come for the Gays 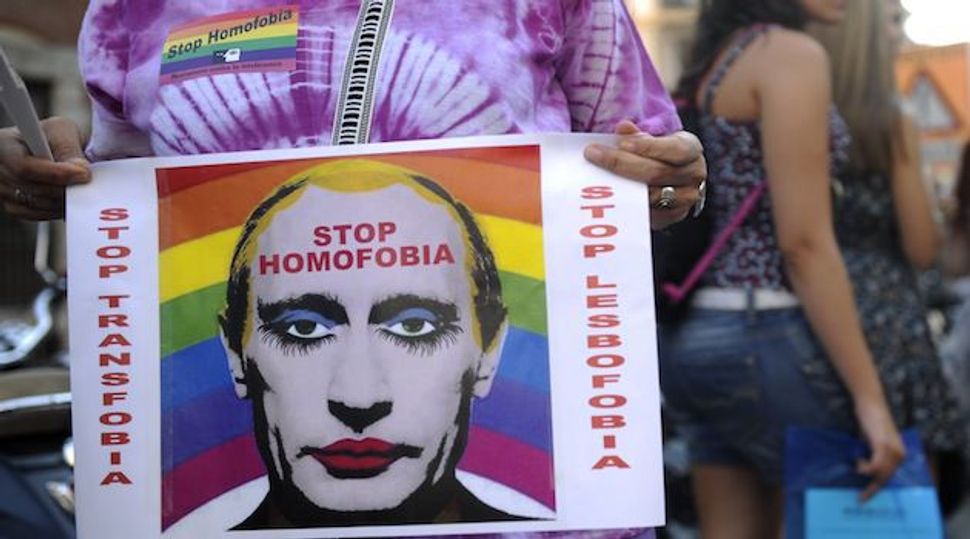 The Jewish community should feel a sense of déjà vu as it witnesses the government-sponsored persecution of LGBT people in Russia. We should respond with a statement of determination nearly as familiar to us as the Shema: Never again.

In the 1960s, with our awareness of the Holocaust very fresh in our memory, American Jews took seriously Soviet scapegoating of Russian Jewry and the efforts to destroy the Russian Jewish community. In 2013, in Putin’s Russia, gays are the new Jews.

In his assault on democratic institutions in Russia, Vladimir Putin is counting on xenophobia, homophobia, anti-Western and anti-immigrant sentiments to turn the Russian people against anybody perceived to be different. Government-run media supports these policies. The precious few independent media outlets cannot compete with Putin’s huge propaganda machine. This, along with the infamous new law banning the spread of “nontraditional sexual relations,” all but silences LGBT people in Russia.

Act Up’s slogan “Silence = Death” comes from recent U.S. history, when coming out and speaking out were essential to changing public views of homosexuality and to mobilizing response to the AIDS epidemic of the 80s and 90s. If you are gay in Russia in 2013, it is no longer lawful to affirm who you are, even in front of your own children.

Tragically, many organizations and corporations that could alleviate the plight of LGBT people in Russia have chosen to stay silent in front of the gay-bashing bully, Putin. High-profile examples include the International Olympic Committee and upcoming Sochi Olympics sponsors like Coca Cola, both of whom have refused to condemn the new Russian law that condones and covertly encourages anti-gay sentiment and acts of violence.

A comparison to the 1936 Berlin Olympics is not farfetched. Remembering what happened in Germany after the Games concluded, we should feel real alarm over what will take place in Russia once the athletes, journalists, and sponsors leave in February 2014, and international attention is no longer focused on Russian internal affairs.

The American Jewish response should draw on our communal memory of the Kremlin’s prolonged oppression of Jews in the Soviet Union and the undimmed horror of how the world winked at Hitler’s gradual erasure of Jewish rights in the years that led to the Final Solution.

We needn’t look as far as Europe for historical evidence of governmental persecution of LGBT people. Progress is being made in the U.S. now, but acts of gay bashing are still regularly condoned here and anti-LGBT bigotry is commonplace in many American religious communities and among governmental figures as high as the United States Supreme Court.

In his new assault on LGBT people, Putin relies heavily on Russian religious leaders. Unfortunately, Jewish religious leaders, alongside the Russian Orthodox Church, are among those who support Putin’s new law. We in the U.S. must revive the activism of American Jewry that proudly and rightfully takes credit for the rescue of Soviet Jews in the 1960s. If only somebody would have as effectively sounded the alarm over Germany’s anti-Jewish policies in the 1930s.

Congregation Beit Simchat Torah and New York’s Russian-speaking LGBT Jewish community call on Jews across the U.S. to recognize the familiar landscapes of systemic oppression: We have been here before. First they came for gays…and we know that Putin will not stop there. The assault on the rights of LGBT people is just a beginning. Our collective memory demands Jewish attention and activism in the face of this recognizable pattern of oppression. Every central tenet of Jewish values directs us not to look away, not to be silent, but rather to respond to the suffering of all disenfranchised people with a spiritual awareness trained by our mythic and historic experience of slavery and oppression.

We Jews have been here before. CBST and the Russian-speaking LGBT Jewish community of New York urge you to stand up and say, Never again.

Now They Come for the Gays