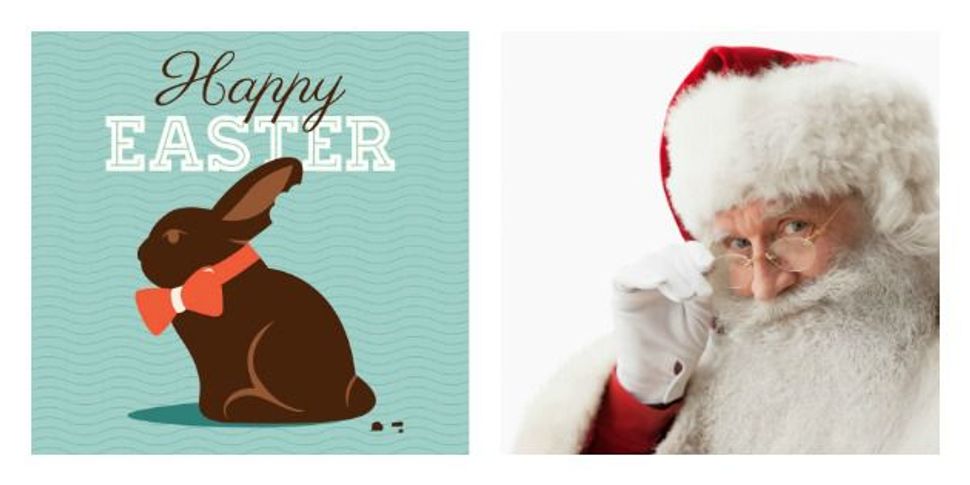 (JTA) — Last spring, I found myself averting my eyes when my 4-year-old mentioned something about the Easter bunny in front of my dad.

We were at my parents’ home in Michigan for Passover and my son said, “When I get back to Brooklyn, the Easter bunny is going to bring me a basket!”

I didn’t want to see the look on my dad’s face or hear him mutter under his breath.

Although my son is being raised as a Jew, he celebrates Christmas and Easter with his non-Jewish father, my ex. I know it bothers my dad to hear his grandson talk about these Christian icons. It bothers me, too.

During our four-year courtship prior to becoming engaged, my then-boyfriend and I came to an agreement about the religious upbringing of our future children. After taking two classes on Jewish culture and an interfaith couple’s workshop at the JCC, we agreed that our children would be raised according to Jewish tradition but could celebrate Christian holidays – in a secular way – with their non-Jewish grandparents. But after my husband and I separated and eventually divorced, some of the prenuptial agreements we made surrounding our interfaith family were no longer heeded.

Before our separation, my husband had begrudgingly agreed not to have a Christmas tree in our home. But since our separation, he has had a tree every winter. That means Santa doesn’t just bring gifts to my son’s grandparents’ homes in Seattle, but to his father’s home in Brooklyn, too.

I understand and respect that it is my ex’s right to observe his family’s traditions. I know he wants to share the holiday experiences he loved as a kid with our son, and that includes having the decorations and believing in the harmless characters associated with the holidays. But I struggle with it nonetheless.

Our son attends a Jewish preschool and has all kinds of children in his class – some with two Jewish parents, some from interfaith homes and others who are not Jewish at all. He already knows that families have their own ways of observing the holidays, and that you can be Jewish and still celebrate non-Jewish holidays with some of your family and friends.

Last December he rambled on and on about what Santa was going to bring him for Christmas. I was tempted to remind him that he is Jewish and explain that Jews don’t believe in Santa. But I went along with it because I didn’t want to burst his Christmas bubble.

Nevertheless, it’s hard for me to accept that our child won’t be raised according to the terms that my ex-husband and I had agreed upon before we married. And somehow I feel threatened that inserting these Christian traditions into my son’s home life will dilute his Jewish identity, even though I know a Christmas elf can’t come and stomp out thousands of years of Jewish tradition.

When April came around and my son informed me, “If I’m a good boy, the Easter bunny will bring me a basket of treats!” I decided not just to corroborate the Easter bunny’s existence but use him as a disciplinary tactic.

When my son began misbehaving, I said, “If you don’t act nicely, the Easter bunny may not bring you a basket!” But the tack didn’t feel right either.

Recently, I have been wondering whether my son could really understand what a character is. When we were watching “Shrek,” I decided to ask him.

“No, Mommy!” he answered with an eye roll. “Shrek is a character!”

“Because he brings me presents!”

Do I break it to him that a fat bearded man will not actually squeeze himself through a chimney (especially considering there are very few chimneys in Brooklyn apartments)? Or do I let him figure it out when he gets a bit older, like he probably would if he were raised by two Christian parents?

And come spring, do I tell him that no giant Harvey-sized rabbit is going to show up with a basket full of treats, but that his grandmother will carefully pick out the treats in Seattle, put them in a priority mailbox and ship them to Brooklyn?

For the time being, I figure I’ll leave it alone, and age will take care of it.

I believe we will provide our son with a strong enough Jewish identity that these Christmas and Easter icons will not threaten his understanding of who he is. But ask me again later this month. I may change my mind.

Annette Powers is a marketing and communications professional. In her free time, she writes about a variety of topics from co-parenting to Yom Kippur to compulsive texting.