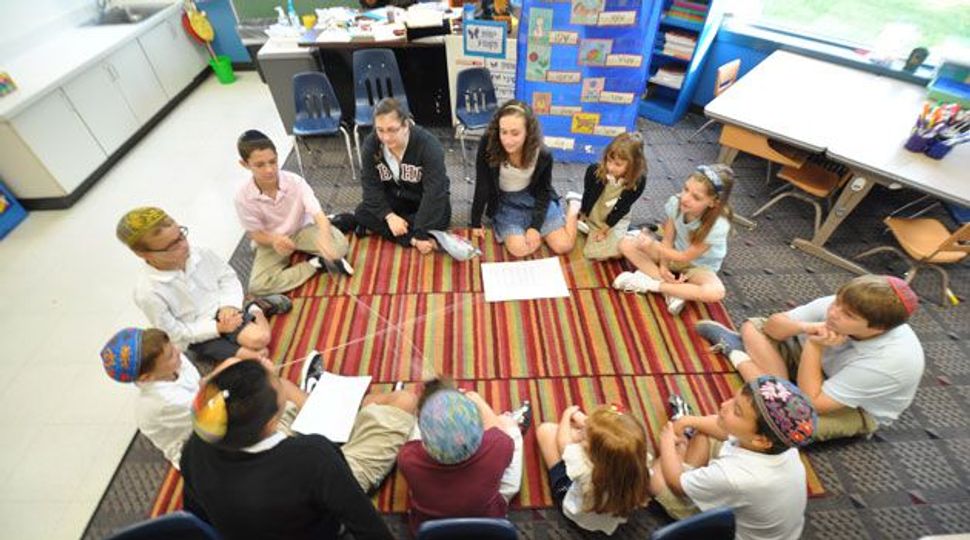 Necessary?: Is a day school education the only way to ensure Jewish continuity? Image by Hyman Brand Hebrew Academy

For non-Orthodox Jews in America, sending one’s child to a Jewish day school has long been considered the best defense against assimilation. So consistently have studies proven this point that it is a mystery why more money isn’t spent on subsidizing those parents who can’t afford to send their children. These schools have become overwhelmingly expensive and the education they offer is in limited supply. As American Jews struggle to figure out how best to ensure the Jewish identity of the next generation against dismal trend lines, some still think Jewish day schools are the only answer, while others are searching for a new paradigm.

I’m not against day school, per se. I just don’t think that day school is essential in order to raise children who are Jewish and proud to be Jewish.

How can I be so sure, you might ask, that my kids will be happily active Jews in the future? That’s easy: Because these kids are being raised to know that Judaism is such a central part of their existence that to take it away would be to take out a structural component of their life’s scaffolding. We were never threatened to marry only Jews; instead, it was taken for granted by me and my siblings that we wouldn’t want to marry someone with whom we could not build a Jewish life and family. The “secret” to a successful Jewish life and future is not the “magic bullet” of day school attendance. The real secret lies in what could be called “Jewish homeschooling” — supplementing after-school Hebrew school (a necessity) with real and vibrant Jewish family life.

While I’m not arguing that day school is the panacea for everyone and I understand that there are a multitude of difficult issues surrounding affordability and accessibility, the bottom line is that Jewish day schools churn out future Jewish leaders in large numbers.

They produce kids who have strong Jewish identities, who are connected both to their local communities and to Israel, who speak Hebrew and who in-marry in greater percentages than their public school peers. Day school attendance together with “Jewish home-schooling” should be the ideal and aspirational model.

While informed “Jewish home-schooling” alone is laudable, at the end of the day, it is neither realistic nor scalable. A brief look at the data shows that a minimum of six years of day school attendance is the most predictive factor of future Jewish engagement.

—“Our Future Depends on Them,” August 5