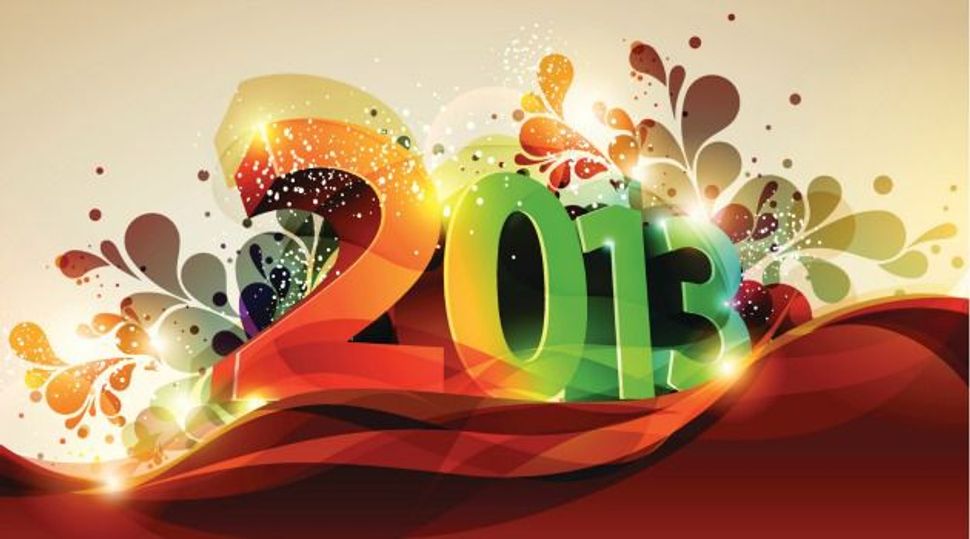 How fast the year flew, this twenty thirteen.

Its joys and terrors, its news unforeseen.

Obama and Bibi made up and fought,

Shutdowns and boycotts and storms from above,

Plus the roll-out disaster called healthcare-dot-gov.

But let’s not succumb to sharing bad news.

And instead let’s celebrate all of the Jews

Who made our world better, more challenging, fun,

Who taught us and led us and got good work done.

Edie Windsor threw DOMA right out of the door.

At the Maccabiah Amar’e Stoudemire coached with great vim

While Jane Katz showed the young how to swim.

Ben Smith got the Buzz, Janet Yellen the Fed,

Marc Maron brought laughter with all that he said.

And while its results caused widespread dismay,

The Forward was happy in one selfish way:

So many opeds from Jews with so much to say!

Jewish museums in Warsaw and DC

Romemu thrived on the Upper West Side

As David Ingber threw convention aside.

So did a chef named Yotam Ottolenghi

Who showed how delish Israeli food could be.

While Mitchell Davis did as much as anyone

On the Left Coast, L.A. got a new mayor:

Another Eric, this one named Rosenthal,

Lobbied for the disabled — and for us all.

Nick Lemann as the dean of Columbia J,

(He’s got Genesis to fund his next endeavor.)

David Stern will step down at the N.B.A.

And Ruth Wisse will retire, with still much to say.

The grieving had a friend in Letty Cottin Pogrebin.

Karen Lewis did that, with her Chicago union.

The Kotel made news due to Anat Hoffman,

Alan van Capelle showed how to bend the arc.

On the web Eli Pariser made his mark.

Not all of the news was happy, of course.

For ignoring the pleas of widespread abuse

From Mordechai Twersky and others who used

To look up to their rabbis. They no longer can.

Julius Berman survived his own scandal

But really, can anyone hold a candle

To Willie Rapfogel, accused of stealing

Millions from the poor? We’re all still reeling.

Bob Filner was a national shame.

We said farewell to the unique Ed Koch,

Ovadia Yosef’s death took us down a notch.

And though it is more than a year since Sandy Hook

Became synonymous with a horror that shook

America to the core. How could we stand by

While innocent children are killed, and not raise a cry?

We honor Veronique Pozner and other parents

Who plead for gun safety and a safer presence.

On behalf of Larry, Adam, Naomi and Dan,

The Forward thanks you for all your support.

Our historic mission to write and report

Online or in print remains just as true