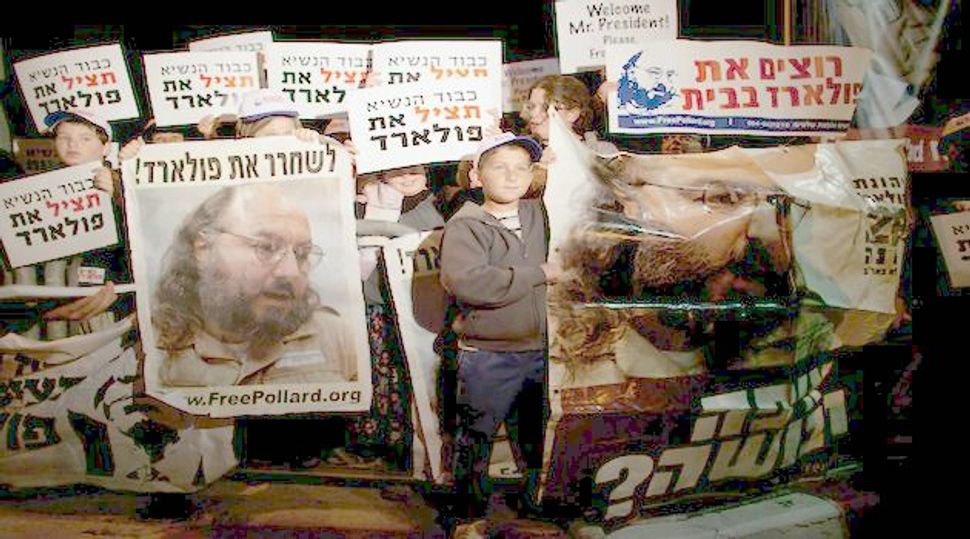 Israelis call for the release of Jonathan Pollard on March 19, 2013 in Jerusalem, Israel.

“Hypocritical.” “Illegitimate.” “Unacceptable.” All these words and more are being used in Israeli political circles to describe Friday’s revelation that the NSA spied on former prime minister Ehud Olmert and former defense minister Ehud Barak in 2009.

And how does the Israeli right wing believe its government should respond to this revelation? Well, it should demand that the U.S. release Israeli-American spy Jonathan Pollard, a man sentenced to life in prison after he was convicted of spying for Israel, pronto. Because, obviously, right?

This reaction is so absurd that not even Netanyahu — a longtime Pollard advocate — can assent to it. He agrees that the NSA espionage constitutes an egregious breach of trust between allies — as he made clear in a statement Monday. And he agrees that Pollard should be freed — as he reiterated Sunday in a renewed request for Pollard’s release. But even he is too embarrassed to suggest there’s any sort of causal link between the NSA espionage and the case for clemency where Pollard is concerned. In fact, he went out of his way to clarify that his request “is neither conditional on, nor related to, recent events, even though we have given our opinion on these developments.”

The idea that the NSA’s espionage and Pollard’s can be mapped onto each other one-to-one is silly, and Israel’s top brass knows it. Olmert reacted with equanimity to the reports that a government email address had been hacked, saying it was very unlikely that any secrets were compromised through such a public channel. Barak simply took it for granted that he was being monitored. And even Strategic Affairs Minister Yuval Steinitz, who blasted the NSA, said Israel has always assumed that its allies spy on it. In other words: This may not be great news, but it’s not that weird. It’s not even unexpected.

Yet to read Israel’s right-wing politicians and pundits, you’d think this was the security breach of the century, the sort of betrayal that should grant their government significant leverage over the U.S.

“There is now a window of opportunity to try to save Pollard from continued imprisonment,” writes Dan Margalit in Israel Hayom. “They [the Americans] are in retreat and are embarrassed. It’s time to strike while the iron is hot, and only on one point: Pollard, Pollard, Pollard.”

Ben-Dror Yemini takes it one step further in Maariv, arguing that a “rare moment” has come, one that Israel can leverage to push back on American pressure and exert some pressure of its own — with regard to the peace process. “This is the moment to make a clear statement through diplomatic channels: There will be no release of Palestinian terrorists without the release of Pollard.”

Whoa. So now we’re prepared to tank the peace process with the Palestinians — which hinges, among other things, on Israel keeping its promise to release several rounds of Palestinian prisoners — if the U.S. doesn’t release Pollard?

In the perennial debate over this infamous spy, it’s sometimes suggested by left-wingers that releasing Pollard is a good idea because it just might grease the wheels of Israeli-Palestinian peace negotiations. But the Israeli right’s cynical abuse of the latest NSA scandal gives the lie to that suggestion. That’s because, even though the left and the right are both using Pollard as a bargaining chip, the two sides are not on equal footing. Whereas some on the left are happy enough to see him released now in the hopes that it might help bring about peace, their counterparts on the right want to make peace actually conditional on his release.

That position is even harder to swallow when you consider that Pollard will be up for parole in two years anyway. Given the likelihood that parole will be granted at that time, it’s reasonable to expect Israel to sit back and wait for his release — however creepy the NSA’s surveillance policies are, and however much sympathy Pollard’s 29 years in prison (and especially his seven years in solitary confinement) evoke.

At the very least, it’s reasonable to expect Israel not to make bad-faith arguments that place Pollard’s early release — something the Obama administration shows zero signs of approving — in the way of peace.