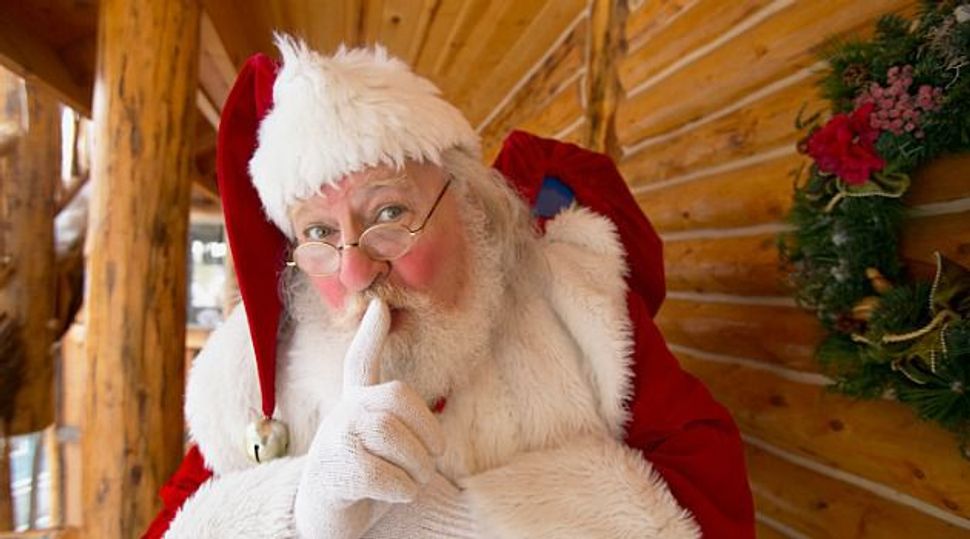 In its original form, the alliterative allusion is to the challenge of raising Jewish kids in a non-Jewish society. Everyone loves Christmas, right? So how come we don’t celebrate it?

But the December Dilemma is dated. A majority of non-Orthodox Jewish marriages are intermarriages. Multifaith families are everywhere. The menorah next to the Christmas tree, once the epitome of treif, is now commonplace. And after a decade or two of closing their eyes and ears to this reality, Jewish organizations are now figuring out how to work with it.

I wonder, though, if we’re headed into a yet another new phase of Jewish-Christian mingling. Recently, these and other pages have hosted lively conversations regarding non-Jews considering conversion, ‘Jewish Cultural Affirmation’ (Steven Cohen and Kerry Olitsky’s rather ponderous neologism), or other forms of affiliation with Judaism and/or the Jewish people. Cohen and Olitsky want to create a kind of Jewish literacy course, Rabbi Andy Bachman wants to convert them, and various haters in the blogosphere have thrown cold water on anything that isn’t the Judaism they personally think is valid.

Add to this the recent speech by Union of Reform Judaism president Rabbi Rick Jacobs, in which Jacobs called non-Jews interested in being part of the Jewish community “the opportunity of the millennium.”

All of a sudden, goyim are good for the Jews. As long as they are Jew-curious.

Cohen and Olitsky say that in a 2011 study of New York Jews, 5% said they were Jewish “by personal choice” and another 2% said they had converted. This, they say, points to a surprisingly high level of interest not in converting, but in affiliating.

I have completely unscientific anecdotal information to support that view. As I’ve traveled the country for book tour and scholar-in-residence weekends this year, I’ve seen more and more Christians in shul. In suburban Chicago; in Beacon, New York; in Houston — the trend is unmistakable.

And not only Christians married to Jews. Increasingly, it seems to me, there are more and more Christians, some on the path to conversion and some not, who are among the most frequent attendees at Shabbat services.

Probably the first question most Jews-from-birth are thinking right now is: Why? Why would anyone choose to be Jewish?

Let’s pause for a moment and reflect on that reaction. If there’s any question why the Jewish Nones are on the rise, why “Jews of No Religion” are increasing, and why well-funded and well-intentioned outreach efforts seem unable to stem the tide, surely this outmoded and pathetic self-loathing, ubiquitous in Jewish community, is a big part of the reason. It’s like we’re saying, ‘Come be Jewish! But Oy, why would you want to do that to yourself.’

Now let’s get beyond the inferiority complex. Actually, there are many reasons why non-Jews would be interested in Jewish community – and you see them more and more clearly the more time you spend in liberal churches. I’ve been to many. The mainliners say all the right things, but they tend to be a little soft. Evangelicals get you in your kishkes, with the intense relationship with Jesus, the fiery sermons, and the unnerving zeal of the most fervent. Catholics have the ritual – “smells and bells” to those who love them. But both often come with side orders of bad politics and bad theology.

Liberal Judaism offers a combination of thick spiritual practice – sitting shiva when someone dies, lighting candles on Friday night, studying rich and varied texts – together with progressive values. It’s that mixture that makes it appealing – not the lox on Sunday or the latkes on Thanksgiving (not that there’s anything wrong with that). It’s the combination of a strong community, a thick spirituality – by which I mean transpersonal bonds of connection, meaning, and inspiration – and a commitment to justice. It can offer depth without the dogma.

Now, if it’s this combination that makes liberal Judaism appealing, then the right response might be the opposite of Jewish cultural affirmation. Possibly, we might want to soup up, rather than dilute, the Jewish stew.

Nor is culture necessarily “it.” Rabbi Brent Spodek, who heads Beacon Hebrew Alliance, one of the congregations where I saw a lot of non-Jewish folks in the crowd, said that his community includes “people of a nominally Christian background who are looking for community, looking for a way to seek and celebrate the Divine, who are looking to learn and grow and reflect do sometimes find their way to us and we welcome them.”

Not only are Jewish cultural trappings less of interest to them – they may be actively unhelpful. Spodek said that “shmaltzy, content-lite nostalgia Judaism is somewhere between meaningless and incomprehensible.”

To be sure, this is not what Olitzky and Cohen have in mind. But it is the way Jewish cultural affirmation gets conveyed today: Fiddler on the Roof. Barbra Streisand. Lox.

And yet, I don’t think Rabbi Bachman’s recipe — convert, become Jewish, dive in — is right either. ‘Conversion’ is a last-century notion.

As Bachman’s column indicated, the logic of conversion is that you’re either “In” or “Out.” Now, it’s nice that Bachman wants to bring so many people In. But is this how 21st century Americans really define themselves today? In or Out?

The folks I’ve talked to don’t. Some people are joiners, others just aren’t. Some people define themselves by sports team, religion, ethnicity, gym membership, profession, family status, sexual orientation, whatever — and some people don’t.

The notion that self-definition is essential either for personal fulfillment or communal continuity is misplaced. We should have enough confidence in the value of the Jewish tradition that we don’t require a full commitment in order to partake in it.

Moreover, this is the generation of the food court, not the restaurant. CuJus (culinary Jews), BuJus, Jewish-music Jews — these are identities that exist at the intersections of Judaism — and, not the ghettos of Judaism-or-else. The future of progressive Judaism is not tribal, whether you’re a Jew by birth, a Jew by choice, or Jew-curious. Judaism and Jewishness will thrive or fail on their merits, not because they are entry requirements for being in an in-group.

I think Rick Jacobs is right that the Jew-curious represent the opportunity of the millennium, particularly since the millennium is only thirteen years old – a mere bat mitzvah girl. Partly, this is because they are swelling the ranks of progressive synagogues. But more importantly, I think, it’s because they are productively redefining what Jewish affiliation, identity, and action mean.