How To Defend Quebec’s Secularism Charter 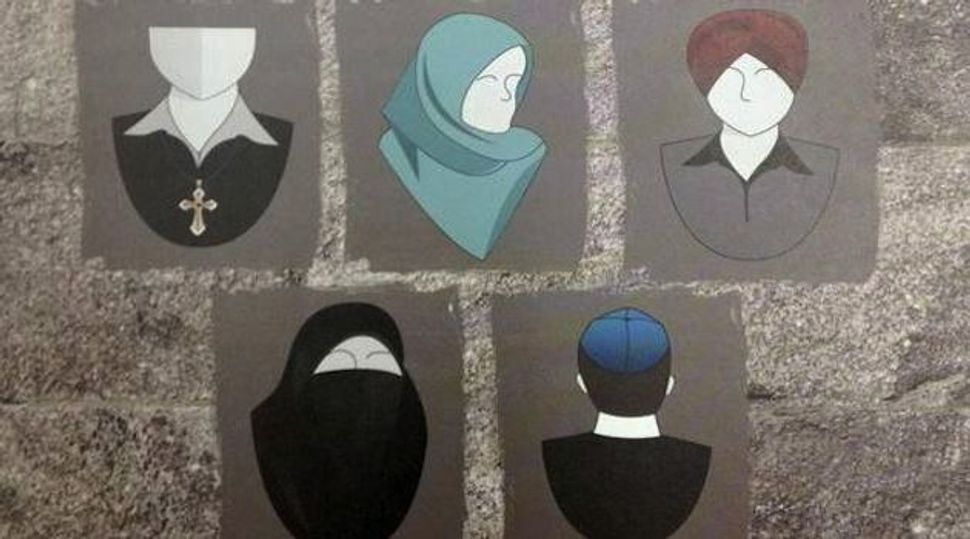 The Charter of Values seeks to ban conspicuous religious symbols. / Government of Quebec

Do you remember the Quebec government’s Charter of Values, the proposed legislation that would bar public workers from wearing conspicuous religious symbols — like the kippah, hijab or turban — on the job? Of course you do. Have you been biting your nails over how you’re going to defend it at your upcoming family holiday party? Of course you have. Well, never fear! The Parti Québécois has you covered with its newly released, handy-dandy how-to guide for defending the controversial charter.

The six-page handbook, released just before Christmas, features a turkey on its cover (no doubt because a tree would seem too religious) and is enthusiastically titled “Holiday party answers to your family’s questions!” Because what family isn’t itching to delve into this perfect storm of religion and politics at a time usually spent in eggnog-sipping bliss?

The Parti Québécois knows how much you hate it when your relatives best you at family debates, so this year it’s decided to give you a leg-up over that obnoxious uncle or know-it-all cousin. How? By arming you with rebuttals to every objection they could possibly voice when it comes to the Charter.

Oops — did I say rebuttals? I meant diversions. And fallacies. And diversionary fallacies.

For example, if a relative asks you “Why ban religious symbols for all state employees?” you’re supposed to respond that employees are already required to refrain from displaying their political beliefs in the workplace; the same logic will now apply to religious symbols. (Never mind that there’s a big difference between allowing your political convictions to impact what you say and do at work, and allowing people in your workplace to catch a glimpse of the kippah passively perched atop your head.)

If asked “What will the Charter change?” you should mention that it will boost gender equality. (Never mind that feminist organizations like the Quebec Women’s Federation have flat-out rejected the idea that the Charter promotes women’s rights. And never mind that, in practice, the Charter would discriminate against many women in the workplace, forcing those who wear religious symbols to quit jobs for which they’re highly qualified.)

For the panicked cousin who objects, “The Charter is just dividing everyone!” the guide recommends this neat rebuttal: “When Bill 101 [Charter of the French Language] was first adopted, many people criticized it, too. But today it’s widely viewed as a powerful tool for integration, cohesion and defense of Québécois identity.” (Leaving aside the question of whether all Quebecers would assent to this statement, the fact remains that, as far as the Charter of Values is concerned, it’s simply neither here nor there. That one charter becomes accepted over time doesn’t automatically defuse criticisms of another.)

As for the cosmopolitan relative who cries, “People everywhere in the world see us as racists!” your response is simple: “False! We are far from being the first to want to affirm the separation of religion and state. There are already similar rules in Europe. Just look at France, Belgium, Germany, and certain Swiss cantons!” (As compelling as those Swiss cantons surely are, again, this is neither here nor there. First, separation of religion and state isn’t necessarily of a piece with banning religious garments. Second, the fact that other countries have passed similar legislation doesn’t make that legislation good. Third, the guide makes no mention of the problematic consequences of this legislation as seen, say, in French society.)

Even more interesting than the diversion-cum-fallacy approach favored by this how-to guide is the appearance of revealing verbal tics. We are reminded twice, for example, that the Charter has received support from “numerous Quebecers originating from Muslim countries.” (Muslims support this thing, people! Muslims!) The guide is reflecting back, with not a little defensiveness, the heavy criticisms the Charter has met with since its fall release — a notable portion of which has come from Quebec’s Muslim community.

And in fact, the whole guide is genuinely very useful when considered in this way: as a mirror that perfectly reflects all the criticisms the Charter has attracted both in Canada and abroad. Unwittingly, the guide sheds light on all the logical fault lines in the Charter — and, to boot, in all the arguments trotted out to defend it.

So, when it comes right down to it, the Parti Québécois has actually given us a pretty nice holiday gift after all: a how-to guide, not for defending the Charter of Values, but for sussing out its weak spots and spotlighting its flaws.

How To Defend Quebec’s Secularism Charter