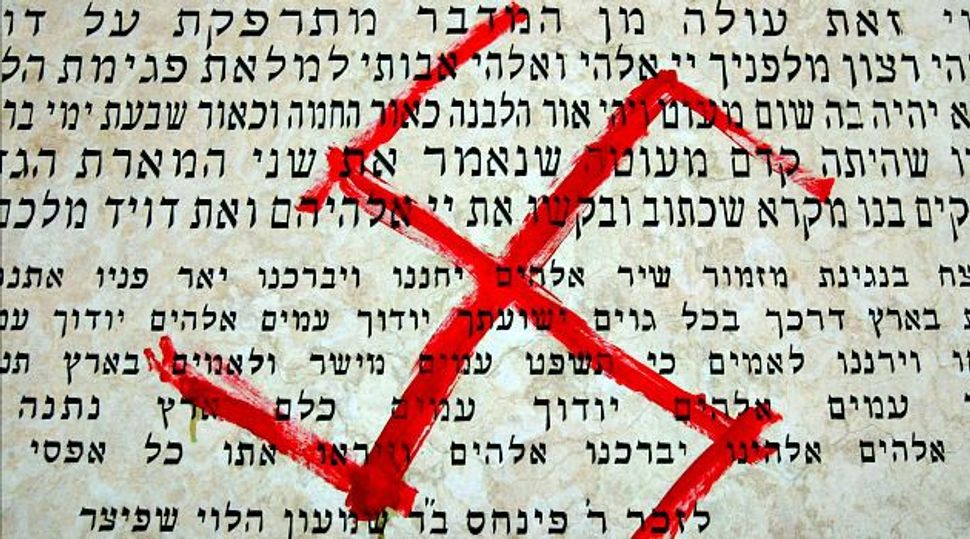 A swastika symbol painted on the wall of a synagogue in Petah Tikva, Israel. / Getty Images

Israel’s Ministerial Committee for Legislation voted for a bill yesterday that, if it passes three readings in the Knesset, would impose penalties on those who use the term “Nazi” as a comparison, employ Nazi symbols, or call in some way for the work the Nazis began (killing the Jews) to be finished. Those who break the law could face a 100,000 shekel fine and six months in prison. But while Nazi comparisons are abhorrent, the law itself is dangerous and anti-democratic.

The bill — a second effort after a similar bill was proposed in 2012 — has broad backing for now. It was sponsored by Likud-Beiteinu, Yesh Atid, and Hatnua, while some members in Labor have in the past expressed support. And we can easily discern worthy motives behind it. Settlers fighting forced evacuation by the state have used Nazi symbols to claim the government is as evil as Hitler. In 2011, to protest the Haredi draft, several Orthodox demonstrators dressed in uniforms that resembled concentration camp clothing, complete with yellow star. Civil dialogue is difficult under these conditions, to say nothing of the deadly atmosphere that can be created when these accusations are carried too far — for example, the murder of Yitzhak Rabin.

And yes, comparing people you disagree with to Nazis is ridiculous and immoral. There simply hasn’t been any group or regime like the Nazis, who didn’t just torture and murder millions of people, but created the most efficient systems and organizations for doing so. The Holocaust isn’t the only case of mass killing in human history, but it is unique.

Moreover, because the term is associated with such horrific and sadistic acts of violence, calling your enemies or opponents “Nazis” obscures the real issues at stake, because of the emotional reactions and overly-sensationalist assumptions the name evokes. This, in turn, makes it that much harder to construct policies to resolve the problem or conflict at hand.

But Nazi comparisons are not for the Israeli state to forbid. Doing so only serves as a restriction on what citizens can say about their country and opens the door to further limitations on their freedom of expression.

Israel already skirts the edges of intolerance toward free speech with its Basic Law: The Knesset, which disqualifies parties from running in elections if they negate either the democratic character of Israel or its existence as the “state of the Jewish people.” (The Law also forbids parties that incite to racism, which was used to ban Kach.) These are broad enough stipulations that they could, in theory, be used to outlaw a wide range of parties and candidates; as a matter of fact, they have been used to try to keep Arab politicians out of politics.

Benjamin Netanyahu’s current and previous governments have also proposed or enacted a number of bills designed to further limit what Israelis can say about their state’s policies. This includes calling for boycotts of the settlements and commemorating the nakba.

One of Israel’s greatest strengths is its democracy. Elections are contested by tens of parties representing a wide range of interests and ideas, while Israelis’ ability to critique, disagree, and dissent has long been nearly unlimited. Indeed, it’s a regular comment that Israelis can say things about their politics that American Jews can’t.

It can be hard to hear, but the ability of citizens to use offending terms like “genocide,” “apartheid,” and “Nazi” to describe their country is a right of freedom and a sign of a confident, mature, and healthy democracy. They may be inaccurate and misleading, but that is for citizens or the government to contest in the marketplace of ideas and words.

Besides, it’s not like use of Nazi terminology or symbols is all that convincing. Haredim or settlers wearing yellow stars might reinforce for Haredim or settlers their opposition to state policy, but few others will suddenly believe that their state is a fascist, Jew-hating, murderous regime bent on world domination.

In other words, the drawbacks of such a bill far outweigh any benefits that might come along with it. Israel should be proud, not embarrassed, by the freedom of expression its citizens enjoy.