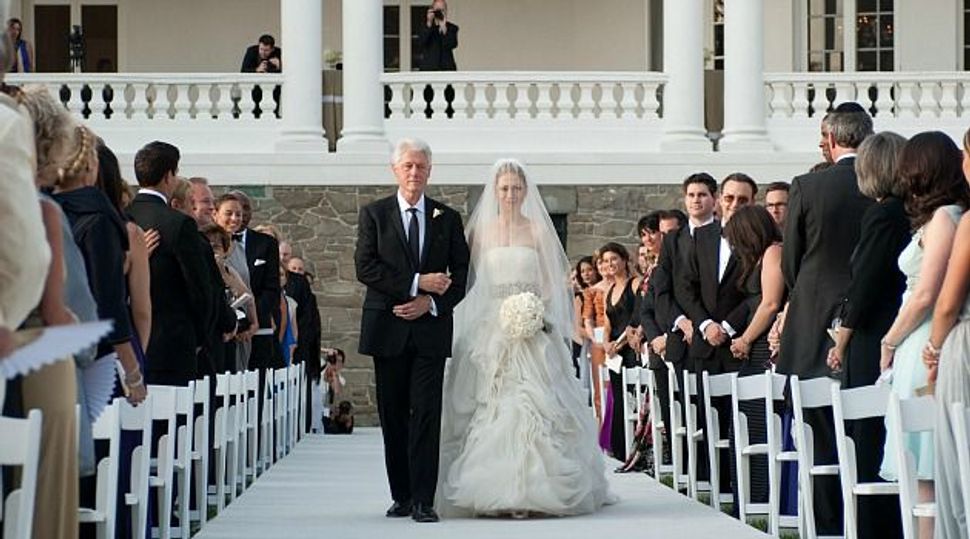 Good Thing? Chelsea Clinton walks down the aisle with her father, Bill Clinton, at her wedding to Marc Mezvinsky. Image by getty images

Is intermarriage good for the Jews? This is not a trick question. It’s the new Rorschach test in determining how you think about the Jewish future.

If you believe, as does the leadership of the Reform movement, that intermarriage is a fact of modern life, an inevitability in an open society where Jews are — yes, this is hard to absorb — actually, mostly loved, then you will direct your energies toward welcoming interfaith couples without penalty or judgment. The religious hug will be a hearty one, no questions asked. Jewish life will be so appealing that everyone will want to join, officially or not. Our numbers will grow because we will attract more than we lose.

If, instead, you believe that intermarriage leads to an overall diminishment of Jewish life and culture, a decline in support for Israel and Jewish institutions, and a fraying of the values that have led Jews to feel responsible for each other over the centuries — in other words, Jewish distinctiveness — then you will throw the inevitability argument to the wind. You will search for every legitimate strategy to persuade — not to harangue but to persuade — young Jews that it is in both their personal and their communal interests to marry other Jews.

This is the new dividing line. The Reform movement is staking out a bold position, led by Rabbi Rick Jacobs, head of the Union for Reform Judaism. “I’m not encouraging intermarriage. I’m not encouraging gravity. It’s a reality,” he told the Forward. “Jewish living, values, commitments are what we stand for, and those can be upheld in interfaith families… Living a rich Jewish life is not the exclusive province of Jewish-Jewish couples.”

This approach is tantalizing but quite risky. It could lead to the emergence of a porous Jewish culture that eschews labels and fealty to a single group, and instead is built on individuals who, in Jacobs’s words, “choose to live lives of Jewish depth and Jewish meaning,” however Jewish they actually are.

It’s fair to say that, until now, this approach has not proved sustainable. While the Reform movement remains the largest denomination in the United States thanks to its embrace of interfaith families, those families are far less engaged in Jewish life than their in-married peers. An analysis of data from the Pew Research Center survey performed by Steven M. Cohen for the Forward showed that of Jews who were born Reform, 92% of the in-marrieds are raising their first child in the Jewish faith, compared to only 24.5% of the intermarrieds. What does that bode for the next generation?

There are, of course, shining examples of how the product of an interfaith family can become a notable Jewish leader. (See: Angela Buchdahl, just named senior rabbi at Manhattan’s prestigious Central Synagogue.) But the data says otherwise.

We can take an honest look at this trend, believe it’s irreversible and do our best to compensate. Or we can say that encouraging Jews to marry other Jews is too essential to surrender to the uncertainties of American assimilation. Not only can we say that. We should.