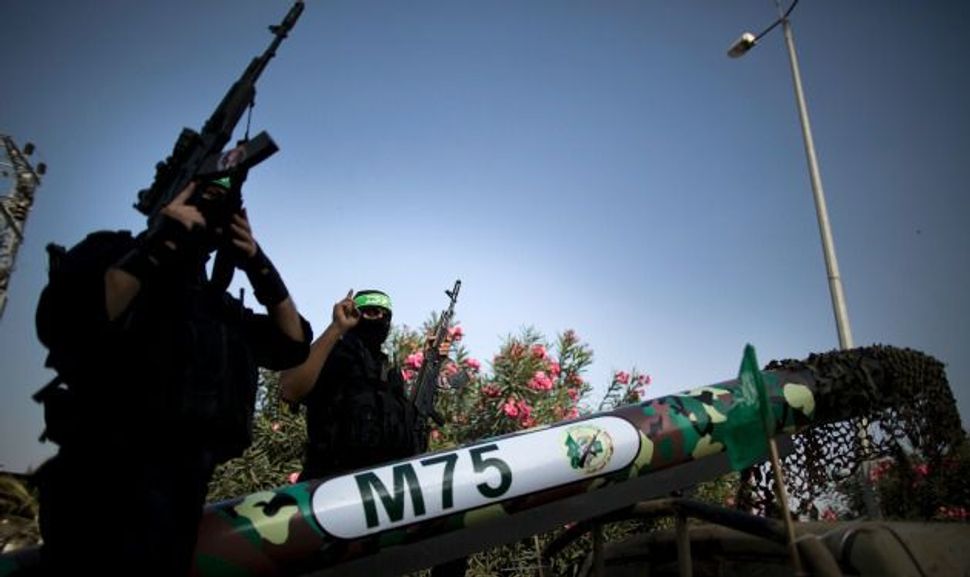 Maariv’s Eli Bardenstein offered a stunningly clear and disturbing report (in Hebrew, my translation below) on Friday that illustrates the vexing complications introduced into the triangular Jerusalem-Cairo-Gaza relationship by political turmoil in all three places. It makes a very useful companion piece to today’s front-page New York Times report by Jodi Rudoren on Israeli jitters over instability on its eastern front.

In both cases, as Bardenstein notes and Rudoren sort of hints, the Netanyahu government is ignoring the intelligence supplied by its own security establishment, which shows jihadi organizations making life difficult for both Hezbollah in the north and Hamas in the south. The jihadis are creating turmoil, launching pinprick attacks on Israel that violate cease-fire agreements between Israel and Hezbollah and Hamas respectively. Hamas and Hezbollah are both besieged — Hamas by the new, anti-Islamist Egyptian military government, Hezbollah by jihadi spillover from the Syrian civil war (as well as political blowback from the Rafiq Hariri murder trial now underway in The Hague) — and are finding it increasingly difficult to enforce their respective cease-fires with Israel. Israel — meaning principally defense minister Moshe Yaalon — chooses to ignore the intelligence, blame Hamas and Hezbollah and launch military responses that only further weaken Hamas and Hezbollah and strengthen the jihadis.

I’ve translated Bardenstein’s piece below, but here’s the gist: Israel is alarmed at the unraveling of the November 2012 Pillar of Defense cease-fire “understandings” and the increasing rocket fire from Gaza — 17 rockets fired in January alone as of Friday (and more since then). It wants Egypt, which acts as mediator between Israel and Hamas, to pressure Hamas to stop the rocket fire. But Egypt has lost influence over Hamas since the military deposed the Muslim Brotherhood government of Mohamed Morsi last July. The military government’s approach is not to work with Hamas as Morsi did but to crack down on it.

Hamas, in turn, complains that the Egyptian crackdown — particularly the mass destruction of smuggling tunnels, which squeezes the Gaza economy — weakens Hamas rule and reduces its ability to control the jihadi organizations that are doing the firing. And both Cairo and Hamas complain that Israel has been making the situation worse by Defense Minister Moshe Yaalon’s insistence on responding to every single rocket launching, no matter how ineffectual, with aerial bombardment.

Since Friday’s Maariv report, Haaretz has published a report on the latest Israel-Hamas exchange, including a stepped-up Hamas crackdown on the rebel organizations following the last Wednesday’s multi-missile attack on Ashkelon and the Israeli air raid that followed.

Political sources: The a-Sisi regime is not pressuring Hamas to maintain the understandings reached after Operation ‘Pillar of Defense.’ The fear: The events will bring about a military escalation. By contrast, in Egypt they explain that the destruction of tunnels to Gaza helps Israel and ask it not to respond to every rocket.

In the last few weeks Israel’s defense establishment has begun to realize that the cease-fire agreement reached with Hamas during Operation Pillar of Defense in November 2012, via American and Egyptian mediation, is disintegrating. The unofficial understandings with Hamas, Israeli sources claim, have lost their influence on the situation in the field.

Sources in Jerusalem claim further that Egypt’s ability under the rule of Defense Minister Abdel Aziz a-Sisi to influence the organization has declined dramatically in comparison to that of President Muhammad Morsi, the deposed Muslim Brotherhood figure. Even though Hamas isn’t interested in a military escalation with Israel, it seems to have arrived.

In the last few weeks, rocket fire from the Gaza Strip toward Israel has increased. Seventeen launches were counted from the beginning of January. Yesterday (Thursday 1/16) seven rockets were fired at Ashkelon — the heaviest barrage since Operation Pillar of Defense. Trials of the M-75 long-range missile continue actively and have even increased. In contradiction to the understandings, Hamas has not been preventing the Friday demonstrations along the fence.

Israel does not have contact with Hamas. The Egyptians, whose task this is, have lowered their profile since Morsi’s overthrow, and the level of dialogue between them and the organization has shrunk. Jerusalem wants Egypt to pressure Hamas to assert control over the rebel organizations and observe the Pillar of Defense understandings. The Egyptians refuse and claim that if they enter into a serious dialogue with the organization, they will have to back away from the blitz they are conducting against smuggling tunnels and the serious war they’re conducting against the Muslim Brotherhood and Hamas.

From Cairo’s viewpoint the destruction of the tunnels is the most important thing they can and must do in confronting Hamas. But in Jerusalem there is a feeling that Cairo’s influence in Gaza was greater under Morsi and has now been lessened. Those close to Morsi claim that there was never a campaign against the tunnels as harsh as the one being conducted today. The campaign, they claim in Cairo, also serves Jerusalem.

The Egyptians are critical of the severe Israeli response to every rocket launched at Israel from Gaza. The criticism is directed principally at the defense minister, Moshe (Bogey) Yaalon, who has instituted an aggressive policy. In Cairo they understand the complexity of the situation in the field, but they plead with Jerusalem to act with moderation and serious thought and not to send jet fighters aloft every time a rocket falls on an uninhabited area.

In contacts between Hamas in Gaza and Egyptian intelligence, it is made clear that Hamas is not interested in escalation. Nonetheless, it cannot enforce its authority on the rebel organizations conduct the rocket fire at Israel. The situation in the Gaza Strip is difficult, Hamas sources explain, because of the destruction of tunnels by the Egyptians on one hand and Israel’s strong-arm tactics on the other. The situation, sources in the organization explain, influences the governability of Gaza. Hamas wants Egypt to pressure Israel to expand the import of materials into Gaza and to ease the pressure, as agreed in the cease-fire understandings.

Israel has complied recently and is allowing the entry into Gaza of construction materials only for projects of the United Nations—and not for other international organizations or the private sector. The reason is the fear that these materials will be redirected toward construction of terror tunnels. Cairo is dissatisfied with the Israeli policy. The thousand tunnels we have destroyed for Hamas can’t compare to the handful of tunnels uncovered on the border with Israel, the Egyptians claim during discussions between the sides. But Yaalon is standing firm and leading toward a possible escalation — not just against the Americans but on the southern front as well.