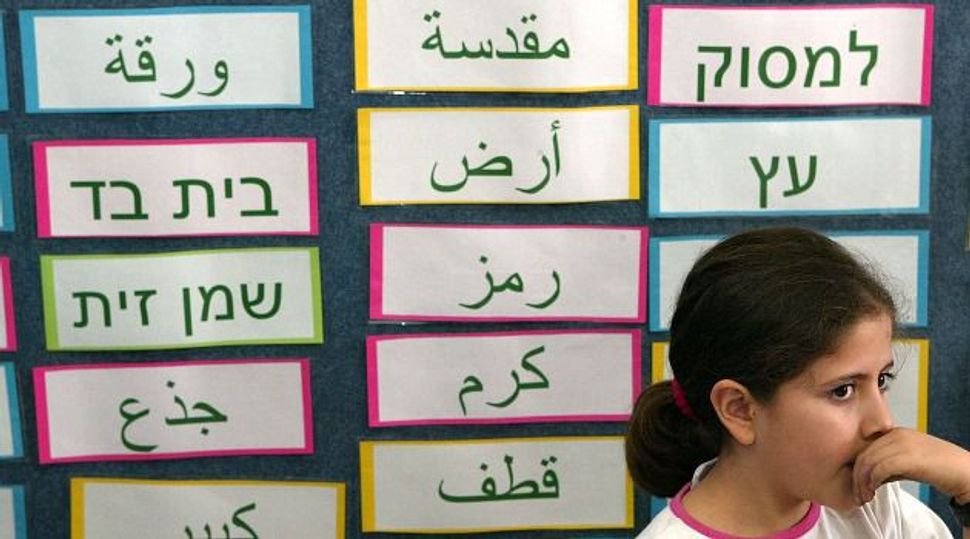 A schoolgirl listens to language class on November 4, 2002 in Jerusalem. / Getty Images

An Israeli high school teacher faces dismissal after a student complained that he expressed radical “leftist” views in the classroom. In a letter to Education Minister Shay Piron, 12th-grade student Sapir Sabah accused Adam Verete — who teaches philosophy in the small northern Israeli town of Kiryat Tivon — of saying the IDF is “unusually brutal” and uses rhetoric in class that disparages the state.

Since news broke, Verete has received threats to his life and other forms of slander and incitement, for which he has filed a complaint with the police. It didn’t help that former MK Michael Ben Ari — a right-wing Kahanist notorious for his Jewish supremacist and incendiary views — posted Sabah’s letter on his Facebook page, immediately turning the issue into a public left-right political battle. Sabah herself has in the past argued in class that all Arabs should be thrown into the sea and also called Verete a traitor, adding that treasonous citizens like him are punished by death. No one from the school has condemned her hate speech or her incitement against Verete, instead chalking it up to “her opinion.”

In what can only be described as a modern-day Israeli McCarthy-style tribunal, administrators from ORT — the non-profit network of state-subsidized schools that employs Verete — held a hearing last week with him to discuss the allegations. Portions of the audio recording of the hearing released on news sites reveal a hostile group of administrators uninterested in getting to the bottom of the issue, or in discussing the boundaries of democracy and critical thinking in school.

ORT said it cannot employ teachers who discourage students from enlisting in the IDF, since this is one of its core values. (It is not listed anywhere on their website.) ORT’s executive director, Zvi Peleg (formerly an active member of Naftali Bennett’s Jewish Home party), has been quoted as saying that under no circumstances can the IDF’s morality be put into question, ever. ORT also claims that Verete violated Education Ministry guidelines by expressing his personal views in class. However, they don’t seem to be familiar with the directives, which state that while a teacher cannot advocate for a political party, he/she can express personal views, as long as they are not presented as fact or preached.

Verete defends himself on both counts, explaining he had facilitated a critical discussion in class about the notion raised by students that the IDF is “the most moral army in the world.” He says a fruitful analytical discussion ensued, at the end of which students asked his personal opinion, to which he replied that among the acts the IDF engages in, some are immoral. Verete told his employers that if such a discussion goes against the school’s values, it means the school categorically deems all IDF actions to be moral, and that is “grave. “

Verete ends the hearing by telling his employers: “It is our bad luck in this country that a discussion of human rights is considered to be delusional leftism. If I say that certain acts contradict human rights — whether that person is a refugee from Africa or a Palestinian at a checkpoint — if that’s considered a political statement, then the situation is severe. It can’t be that basic humanistic values are a political statement. They’re not.”

Verete’s statement and his story point to a disconcerting trend in which certain values are stringently categorized as left or right. Adam Verete is “left” because he prompts critical thinking of the state’s most sacred pillars — security, military and its “Jewishness” — whereas Sapir Sabah is “right” because she is patriotic and pro-IDF. And in the Israel of 2014, the right is almost always “right.” The education minister only responded Sunday, after a petition by educators denounced his conspicuous silence and argued that the hearing was a frightening example of extremism and censorship. He commented that he didn’t like what he heard of the hearing, but did not challenge its existence and said nothing of the incitement against Verete.

Another hearing this week will determine the fate of Verete’s job, but ORT already encouraged him to voluntarily resign in the first one. The largest network of independent, vocational state schools in Israel has thus made it clear that a teacher who doesn’t toe the national line has no place in its schools. This, despite the fact that many students and parents have protested on Verete’s behalf and attested to his integrity as a qualified teacher — even if they don’t agree with his views. Without a strong response from the education ministry on the matter, the message will be sent that public education in Israel is about what to think, and not about how to think.