Pete Seeger Gave Folk Music Life — and So Much More 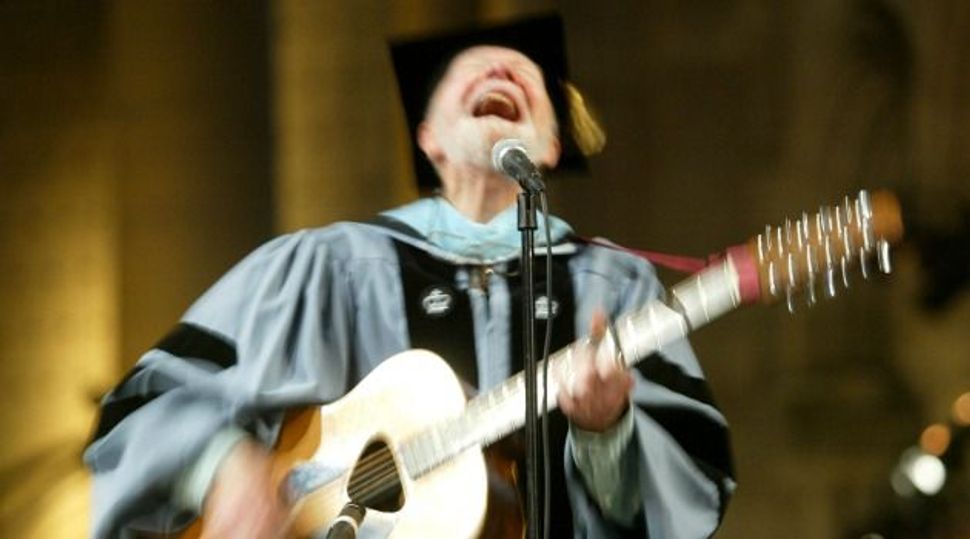 If Pete Seeger had written or re-discovered or adapted just “If I Had A Hammer” and “This Land Is Your Land,” even without so very many more, his passing would be a sad day. But he did way more than that. Essentially, he gave birth to a new life for folk music in this country. He gave us our heritage, which might well have languished without his dogged energy and endless talent.

Somewhere in my files, I have a wonderful Seeger recording that blends Ani Ma’amin and We Shall Overcome, moving back and forth from one to the other seamlessly – and ever so appropriately. I also have his recording of songs from the Spanish Civil War, a gem.

I discovered Seeger in 1950 on an improbable recording of “Goodnight Irene” – on the flip side of which (we’re talking 78 rpm’s here) was “Tzena Tzena.” That was, as I later learned, two years after he, together with Lee Hays, Ronnie Gilbert and Fred Hellerman created The Weavers. By the time I first heard him in concert, in 1956, I was a devotee.

But: People are, as you may have noticed, complicated. That concert took place as best I recall in late October, days after it became apparent that the Soviet Union was intent on suppressing any deviation from its directions by the Hungarian government. Indeed, it was in the days between October 23 and November 4 that Soviet tanks entered Budapest. I am quite certain that the Seeger concert happened within that time frame – that is, while the rape of Hungary was in process. So it was something of a shock, a very unpleasant shock, to hear Seeger, at the end of the concert, invite the audience to a reception at the headquarters of the Soviet-American Friendship League.

I was furious. But you take a person’s life as a whole, not as an opportunity for parsing. (My favorite example: Ted Kennedy, whose personal life was far from exemplary – but whose public life was immensely praiseworthy.) And taken as a whole, Seeger’s life was a gift to us all. Arlo Guthrie once said, “Every kid who ever sat around a campfire singing an old song is indebted in some way to Pete Seeger.” Every kid, and every adult as well.

And all that’s not even counting “Abiyoyo,” possibly the most popular kids’ song of all.

It is impossible to bid him farewell with the traditional “May he rest in peace,” since his characteristic mode was in fact constant restlessness. Maybe that’s why the banjo suited him so well.

Pete Seeger Gave Folk Music Life — and So Much More