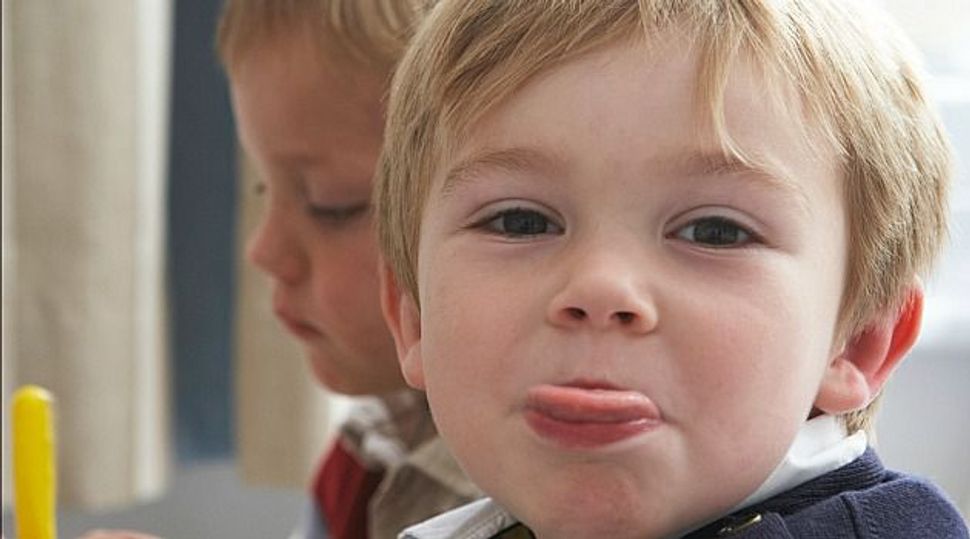 “Look at me!” has probably been a refrain of parenting small children since the days of “Mom! Look at the drawing of oxen I made on the wall of the cave!” It can seem constant: “Mom! Look how high I can go on the swing!”; “Dad! Come look at my drawing!”; “Mom! Look at me! I’m standing on my tippy toes!” And in the age of the iPhone camera, we as parents can easily capture all these adorable moments and send them out to friends and family, and post them on Facebook — which basically is the adult way of saying: “Look at me!”

Implicit in all our exhibitionism and “Take pics or it didn’t happen!” culture is the idea that it’s the acknowledgment from the outside world that makes an endeavor worthwhile.

As a parent, I think that’s dangerous, and I want to try to stop it in my own home.

Don’t get me wrong: It’s hard for me to retreat. I adore each one of my (five) kids. Through the rose-colored glasses of my adoration, they are all little geniuses, even the 3-month-old. But if I leap to obey each time I am told to “look at me” — or applaud them for everything they do — they will have a distorted sense of what “accomplishment” really is.

These days, parenting means schlepping to games and meets and performances hours away. It even means sitting through practices for these displays of “skill,” often in quotes: “Mom, did you see that catch I made?” Oy.

I have a sneaking suspicion that all this “Look at me!” is more than just narcissistic — it’s self-defeating. Because if a kid feels that her actions have no worth until they’re observed and applauded by someone else, then how can she develop an inner compass? How can my son develop a sense of what gives him personal satisfaction if doing a good job hinges on my attendance or approval?

In other words, it shouldn’t be the stamp of my eyeball or my presence that makes something worth doing or accomplishing. It’s the personal satisfaction of having done your best that conveys real worth, and self-worth.

And I’m trying to put my money where my mouth is by taking a step back.

I don’t watch my kids at practices. I don’t go to all the games or performances. You might think I’m being lazy, but actually, I’m doing it on purpose.

I encourage my kids to write in journals. One son of mine is artistically inclined, and I’ve gotten him a sketchpad to use as a cartoon journal. He draws a cartoon for each day of the year, and it’s a drawing of something that happened to him that day. When my kids ask me if I want to see what they’ve written, I tell them that these things aren’t for me, they’re for them. And in a few years, if I’m invited to do so, maybe we’ll look back on them together — or maybe not. But in the course of this project, they’ll have developed their own self-conception of what works in drawing or writing and what doesn’t, what’s funny and what isn’t, what conveys how they feel and what falls flat. And it will have come from them, not from me.

According to the Talmud, we Jewish parents are obligated to teach our children three things: to earn a living, to study Torah daily and to swim. The last part is not only, I believe, in order to save a life from potential drowning (pu pu pu!) — it’s to teach independence. No one swims holding someone else’s hand; swimming means an ability to dive into the darkness alone, and to come up and breathe. Swimming means the assurance to step into the tide and know that even if there is no one there to watch you, you will not drown. And it’s that independence and resilience that I want to convey to my children.

This spring, I just refuse to be on the sideline of every single baseball game with the other parents, equipped with the requisite foldable chair and coffee thermos. I know that for some parents, this truancy is tantamount to heresy. In a suburban community like mine, attendance at all children’s sporting events is seen as mandatory.

But it makes sense — both for me and for my sons — to stay away. Because when I’m not there, my sons won’t be performing for me, or be validated by my presence. Instead, they’ll be doing this rare, esoteric thing called “enjoying themselves” or “having fun.” They’re not going to be worried about how they will be reflected in my eyes, or whether I saw a particular play. Instead, they’ll get to spend time with their teammates and themselves. They won’t be worried about how they will look in my camera lens, but instead will just be spending time in the moment. You know — like kids.

And the unexpected flip side? When I did go to the last flag football game of the season last year, my son made sure to come over to me numerous times on the sidelines and thank me for coming.

“I really appreciate you being here today,” my 8-year-old said before running back out onto the field. “Thank you.”

“Wow! My son’s never thanked me for coming to anything,” a dad next to me remarked. “You must be doing something right.”

Or maybe I’m just doing less of something.

Jordana Horn is a contributing editor to the Forward.