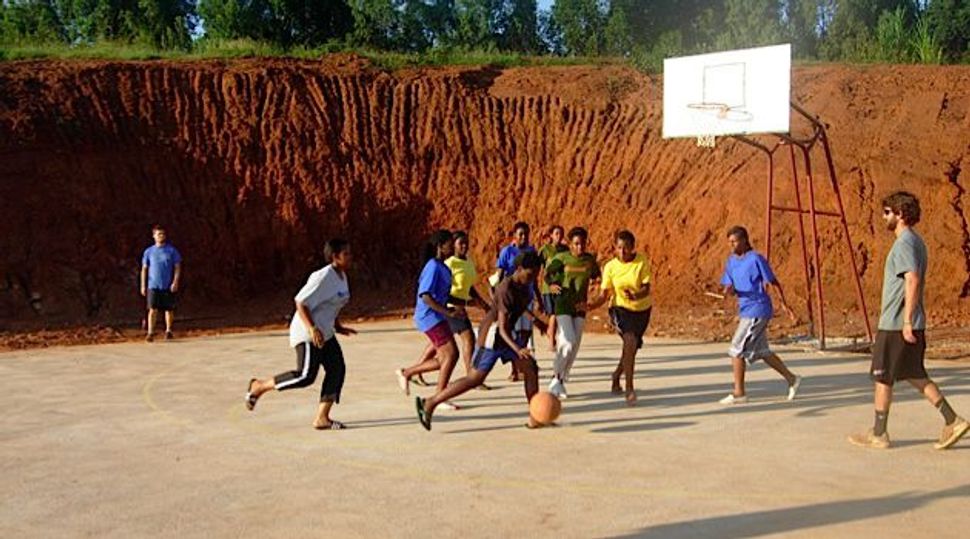 Students at Agahozo-Shalom Youth Village play basketball on a village court in May 2009. Photo: Ben Gittleson

It started with a simple question.

Anne Heyman and her husband, Seth Merrin, were attending a 2005 talk at Tufts University Hillel by the real-life hero of “Hotel Rwanda,” Paul Rusesabagina, when they asked him to share the greatest challenge Rwanda faced a decade since the country’s 1994 genocide took millions of lives. The hotel manager-turned-savior told them that his tiny country had 1.2 million orphans — approximately 10% of its population — and no system to care for them.

Anne’s mind jumped to the youth villages of Israel, where thousands of children orphaned by the Holocaust took refuge in collective communities that gave them a semblance of normal life. Could Rwanda harness Israel’s youth village model? Anne called experts in Israel, spoke with Rwandans and worked with the American Jewish Joint Distribution Committee, coming to believe that Rwanda’s orphans could thrive in the same way that Israel’s did decades before.

Anne’s dream became a reality in December 2008, when the Agahozo-Shalom Youth Village opened its doors to its first 125 high school-age students. As a junior at Tufts, I helped lead a group of 17 fellow students to the village the following summer, when construction crews were still putting up buildings and much of the student housing sat vacant.

Even early on, we could tell Anne’s vision had caught on. Kids who lost their parents 15 years before now lived with “house mothers” — Rwandan women whose own children had perished in the genocide — and called their housemates their brothers and sisters. The daily rhythm of school, informal education, sports and more restored a sense of normalcy for the teens, many of whom came from turbulent households.

Jewish values permeated the philosophy of the village, which draws its name from the Hebrew word for “peace” and the Kinyarwanda word for a place where “tears are dried.”

Just months after their arrival, the Rwandan kids had internalized the Jewish concept of “tikkun olam” — repairing the world — and put it in action volunteering in villages near their own. They worked the fields with Israeli volunteers who taught them Hebrew words and showed them how to use drip irrigation. The kibbutz had arrived on the hilltops of East Africa. The village’s high school, an integral part of the day-to-day routine, borrowed parts of its teaching philosophy from an educational institute in Israel.

Our peoples’ shared encounter with genocide drove us closer, still, when the Rwandan students asked us about the Holocaust. Their own holocaust had taken place much more recently and the scars, both physical and psychological, were still fresh.

One counselor told me how militiamen murdered his grandmother and “violated” his sister before killing her, too. Another time, a staff member speaking to our group turned her head, and for a brief moment, revealed a 10-inch-long scar from a machete attack.

But even with this horrific past buried just beneath the surface, the kids pressed on. While at Agahozo-Shalom, a friend and I paired up with a “family” of 16 girls and a mother. In just six months, they became close, hugging, giggling and acting like a nuclear family. Their success was what Anne had envisioned back at Tufts.

Anne lit up the village on her frequent visits. The kids called her mother, the staff, sister. Her vision turned a smattering of empty hilltops an hour outside Kigali, the Rwandan capital, into a flourishing, vibrant home for kids from across the country.

For her, “tikkun halev” — repairing the heart — was central to the village’s mission. The village brought in social workers and specialists who helped heal the children in a country largely devoid of psychologists. Music, arts and sports programs exposed them to a world of possibilities, helping them realize their full potential.

My visit to Agahozo-Shalom coincided with the final weeks of preparation for the community’s official inauguration. Every student mentioned how excited they were to dance with Anne during the ceremony; her spirit carried the village and inspired its residents and staff alike.

In the years since, Agahozo-Shalom has grown to house 500 students, and its first class graduated last year. Anne’s years of work have enabled her Rwandan partners to take control of much of the project.

Subsequent groups of students from Tufts and colleges around the United States have ventured to Agahozo-Shalom and the genocide memorials that dot the Rwandan countryside. Anne’s mission has spread far and wide, with volunteers and donors from all across the world.

On Facebook, village students and alumni shared their anguish over Anne’s untimely passing Friday in a freak horse-riding acident. She was 52.

“R.I.P our Hero Mother,” one student wrote. “It takes life time to forget the person who is important and a hero [sic] to u,” another wrote, calling her an angel and a grandmother of many kids.

“Death is nothing so long as one can survive through one’s children,” according to a Rwandan proverb Agahozo-Shalom posted to its website this weekend. Anne leaves behind her husband, three children and thousands of Rwandans touched by her unshakeable commitment to repair the world.