Confessions of a Disengaged Young Jew 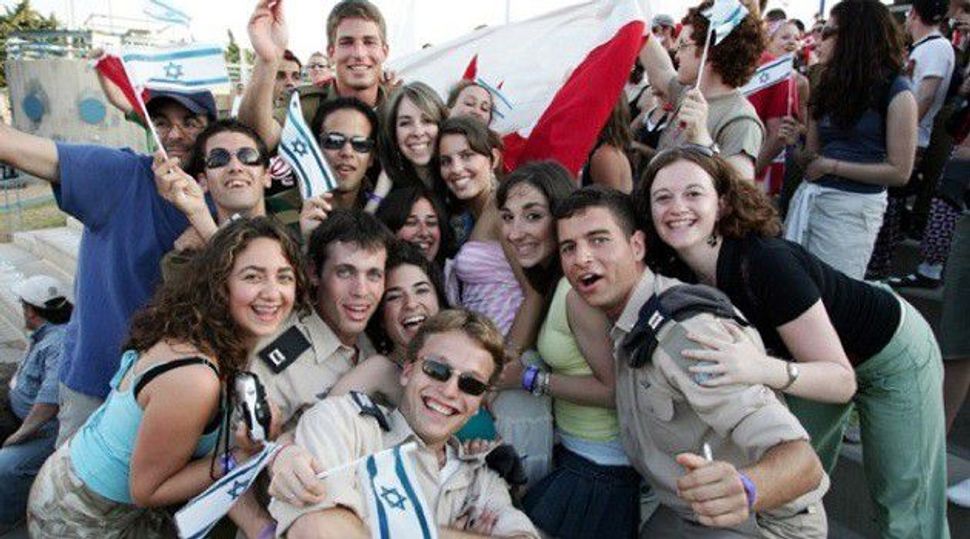 How I Met My Husband: Birthright has it?s important side benefits but for most it presents a very stilted version of Israeli life and politics. Image by Birthright Israel

I don’t have strong opinions about Israel. I can’t say whether the country’s risks justify the force it often employs, nor can I say whether its greatest threats come from within or without.

It’s strange to begin a column by revealing one’s indifference on a topic. I know. Though what interests me isn’t what one should think about Israel, but how I got here. And that’s something on which I have an opinion.

This resistance to taking a stand on Israel was born of my experience going to Israel-themed programming at my college Hillel, and later on a Birthright trip. These two institutions aim to foster attachment to Israel among young adults. Unfortunately, they had the opposite effect on me.

I went to Hillel and on Birthright because I was looking for a source of unbiased information on, and sober insight into, the country. I naively believed that I could rely on the Jewish community to educate me. I wasn’t looking for a diversity of opinions so much as I was hoping to find a place where I could leave all the noise behind and feel comfortable and safe. I just wanted facts, presented by someone who did his or her best to be fair. I found nothing of the sort.

Having left Hillel and Birthright uninformed, my indifference eventually became willful. I just couldn’t juggle the experience of Tel Aviv’s lively beaches, the serene intensity of Friday evenings at the Kotel, and the sadness and shame I feel when I hear about life in Gaza and the West Bank. So instead of finding a way to reconcile these discordant realities, I detached. Israel just wouldn’t be my problem to solve.

As we debate whether or not Hillels should open up their doors to anti-Zionists, we should keep in mind that according to the recent Pew Research Center study on American Jewry, more and more young American Jews are moving in my direction, distancing themselves from Israel altogether. This isn’t so much about Zionism versus anti-Zionism as it is about not bothering at all.

Having a diversity of opinions would help, but what might be more effective would be to give people with my mindset a rhetoric-free place to learn. What disappointed me most about my experience with Israel education in the Jewish world is that nobody seemed to trust me with facts, or believe that I could handle nuances or contradictions. I could.

I went on Birthright in 2004, on a trip called “Behind the Headlines.” I chose this one hoping to do exactly that, to get the backstory on Israel. Imagine my disappointment, then, when, a few days into the trip, our bus traveled alongside a very tall, very long wall and the trip leader felt no need to explain what it was there for and who was behind it. This was the moment when I realized that not only were we not going behind the headlines, we weren’t even going to cover them.

The trip wasn’t a total bust; I met my husband there. But to this day we remain a little ashamed of this shared history. There is something unsettling to both of us about the fact that our love blossomed amid all that denial and, for us, guilt.

In response to the Pew study’s findings that young American Jews are more likely to be critical and less likely to feel attached to Israel, Jewish leaders claimed that those suspicious Jews are probably just uninformed. But seldom do any of these leaders stop to consider that maybe, just maybe, they could be trying a little harder to provide Jews with more of a knowledge base.

I know I must take responsibility here, too. There were, of course, opportunities to educate myself along the way, books to read, lectures to attend. But without any base, I didn’t know where to begin, or whom to trust. I knew that when it comes to Israel, everyone’s got their agenda, and I was scared that I wasn’t informed enough to see through it.

Lately though, with every spritz of my SodaStream, or every news report about the expansion of the settlements, my willful indifference has begun to no longer feel right. I am starting to think that as a Jew, I might have a responsibility to pick a side and take a stand. Distancing, which once let me avoid Middle East politics, now just makes me feel complicit. The next step is figuring out where to start.

Confessions of a Disengaged Young Jew