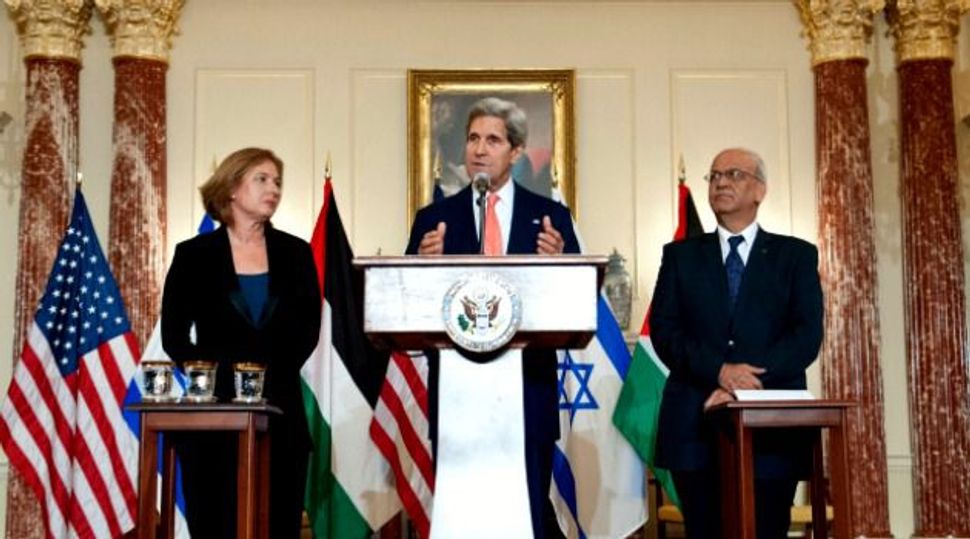 What is J Street going to say if, after urging American Jews to support the Kerry peace mission, that mission wins the support of the right-wing Netanyahu government — but not that of the Palestinians, who view it as the terms of their surrender? And what will J Street say if Western liberal opinion, and even much of Israeli liberal opinion, decides that the Palestinians are right?

This is a question that J Street and all American Jewish liberals supporting U.S. Secretary of State John Kerry’s efforts should ask themselves now, because all indications are that within a few weeks, Kerry is going to present a “framework agreement” for a peace treaty that the Israeli government would be crazy to reject and the Palestinian Authority crazy to accept.

This week, Israel’s Channel 10 news ran a report saying “the emerging framework document is so unthreatening even to Israeli hardliners that it is unlikely to prompt any kind of coalition crisis.” At the same time, the report, citing sources close to the negotiations, said “Kerry would now face an even greater challenge to persuade the Palestinians to accept it.”

To anybody who’s been following the news of the peace talks, the story made perfect sense. Kerry reportedly has given in to Netanyahu’s demands to the point that the framework agreement is shaping up to be not only more “pro-Israel” than the 2001 Clinton parameters, but even more so than Ehud Barak’s offer to the Palestinians at the 2001 Taba talks or Ehud Olmert’s at the 2008 Annapolis talks.

There has been nothing but expressions of demoralization coming from the Palestinian side. Even one of the most moderate Palestinian figures, Yasser Abed Rabbo, was reported in Haaretz as saying “no Palestinian leadership can accept Kerry’s formula for a framework deal, which [Abed Rabbo] says is vague when it comes to issues important to Palestinians and detailed regarding Israeli concerns.”

Reports are that the agreement includes a Palestinian capital somewhere in “metropolitan Jerusalem,” which is a very far cry from a capital in all of Arab East Jerusalem, as the Clinton parameters (and the world consensus) call for.

Also, Kerry’s plan reportedly includes no Palestinian refugees whatsoever returning to Israel proper; Olmert offered to repatriate at least 5,000 of them, and Barak had a team of advisers at Camp David negotiating the issue with the Palestinians.

Furthermore, Kerry is said to back Netanyahu’s demand that the Palestinians recognize Israel as “the nation-state of the Jewish people,” which the Palestinians rightly say would be a slap in the face to the 20% of Israel’s citizens who are Arab.

In addition, there’s a strong likelihood Kerry will endorse a long-term Israeli military presence in the Jordan Valley — on the territory of a Palestinian state — which Olmert recently noted was not one of his demands during the Annapolis talks.

Meanwhile, Netanyahu says he intends to keep not only the large settlement blocs near the Green Line, but also Hebron and Beit El, which would cut deep into the heart of a Palestinian state. We’ll see if Kerry goes along with this, too.

Since Israel conquered the Palestinians in the Six Day War, nobody — not Clinton, nor Barak, nor Olmert — has ever offered them a state in the commonly understood meaning of the word “state”: an independent, sovereign territory. No one has ever offered the Palestinians a piece of land where they, like Israel and every other state, would have the right to raise a military and control their own borders, air space and sea coast. Israel always insisted on keeping those powers to itself, and the United States has always backed Israel up. Denying independence and sovereignty to a Palestinian “state” is by now a hardened Israeli-American position, and Kerry has certainly not challenged it.

What he has done, though, is retreat from former American and even certain Israeli offers to the Palestinians on Jerusalem and refugees, added the demand that they recognize Israel as a Jewish state, as well as the likely demand that they accept the presence of Israeli soldiers in the Jordan Valley, and the possible demand that they allow their state to have a big Israeli wedge cut out of its core by the permanent presence of the Hebron and Beit El settlements.

In all, the U.S. framework agreement is shaping up to be easily the worst deal the Palestinians have ever been offered in negotiations with Israel. Yet this is what J Street and all sorts of other American Jewish liberals are going to bat for.

They’re making a huge mistake. If Kerry’s deal turns out to be as Bibi-friendly as expected, it would place the Palestinians in the position of either having to reject it and get blamed in America for “torpedoing” the chance for peace, or going ahead with the talks under suicidal terms while forgoing other avenues, such as the United Nations, to gain their land and freedom from Israel.

Either way, no good would come of it; the Palestinians would never sign a final peace treaty based on such terms. But whether the Palestinians walked away or, alternatively, gritted their teeth and went on negotiating, it would be a great diplomatic victory for the right-wing Netanyahu government and the settler movement — and a costly diplomatic defeat for West Bank leader Mahmoud Abbas and the Palestinians.

Above all, it would be a triumph for the status quo — the 47-year occupation — and yet another devastating blow to the chance of ending it.

J Street and other American Jewish liberals who genuinely want to see the occupation end have put all their chips on President Barack Obama and his administration. It turns out to have been a terrible bet. After an early attempt to win Netanyahu over with “tough love,” Obama has done nothing but cave in to him and the Israel lobby on everything having to do with Israel’s treatment of the Palestinians. And from all the evidence, Kerry’s framework agreement is going to be more of the same, except that it will be more damaging than the previous capitulations.

But then, who knows? Maybe these reports will be proven wrong. Maybe Kerry will surprise and bring in a deal that offers the promise of a real Palestinian state taking its place alongside Israel. In that case, it will be incumbent on me and a lot of other pessimists to change course and join J Street and its allies in urging Israel (and the Palestinians) to say yes.

But if expectations are borne out and Kerry’s framework agreement lands as an unprecedented American gift to Israeli hardliners and a bear trap for Palestinian moderates, then J Street and Obama’s other Jewish supporters are going to be in an embarrassing position. They will suddenly find themselves in the same camp with some very illiberal people gloating over how Bibi has won again, and how the Palestinians are again proving they “never miss an opportunity to miss an opportunity.”

Larry Derfner is an American-Israeli journalist who blogs for +972 Magazine.