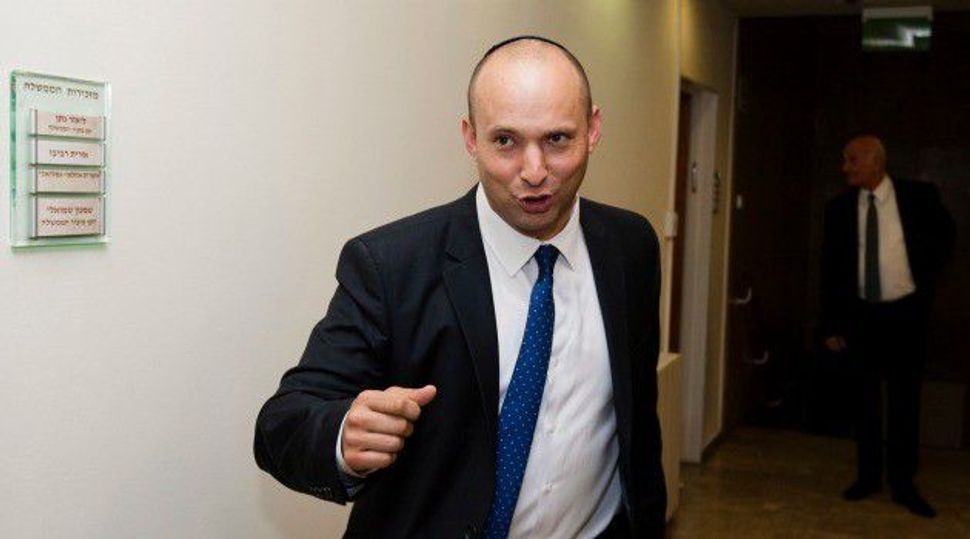 The Israeli minister with the Diaspora portfolio believes that “what used to work as the Israel-Diaspora relationship doesn’t work,” he told the Forward.

Minister of Jerusalem and Diaspora Affairs Naftali Bennett said that Israelis need to start deferring to Diaspora Jews regarding their needs, and the needs of the Israeli-Diaspora relationship. “I live in Israel, I don’t understand the Diaspora perfectly; the Diaspora understands itself much better,” he said.

Israel has traditionally looked at the Diaspora largely as a source of funds and immigrants, but the relationship needs to be more reciprocal, he said. Bennett made his comments ahead of a global online consultation process taking place this week, in which all Jews are being invited to voice their opinions about what provision should be made for the “Jewish future.”

One of the main questions on the table will be how the Israeli government should spend a new $140 million annual budget which it is investing in programming for Diaspora communities, in addition to its existing investment in Birthright trips.

Bennett said that the objective of the funding is to deepen Jewish identity and attachment to Israel in the Diaspora, but “we don’t know how” in Israel. “The process of building a plan is going to be a collaborative process,” he said, going on to add: “The lesson is that we [Israelis] are not the smartest people in the world and we don’t have all the answers here.”

Jewish Agency chairman Natan Sharasky also discussed the upcoming consultation with the Forward. “There are two things that are historical,” he said. “First, that the government is ready to put huge sums of money every year [into the Diaspora], and secondly that the partnership is a partnership of equals — all the sides are deciding together what to do as a Jewish people and where to put their money.”

The “Online Brainstorming Marathon to Plan the Future of the Jewish People” is an initiative of the Israeli government and the Jewish Agency for Israel. Any Jewish person can register to share their thoughts in the three-day discussion, which starts on Sunday.

It will take place around the clock in various languages across seven online chat rooms, and be chaired by a 30-strong team in Jerusalem. Israeli politicians, including Prime Minister Benjamin Netanyahu and Bennett will participate in and observe discussions, as will various Diaspora leaders.

The Israeli government and the Jewish Agency started a consultation process with leaders from Jewish communities, organizations and foundations last year, and next week’s forum is meant to bring the discussion to a more grassroots level.

The Jerusalem team facilitating the discussions will create a set of recommendations based on the points raised, and the recommendations will be presented at the Jewish Agency Board of Governors meeting later in February.