Will Hollywood Get New Intermarriage Script? 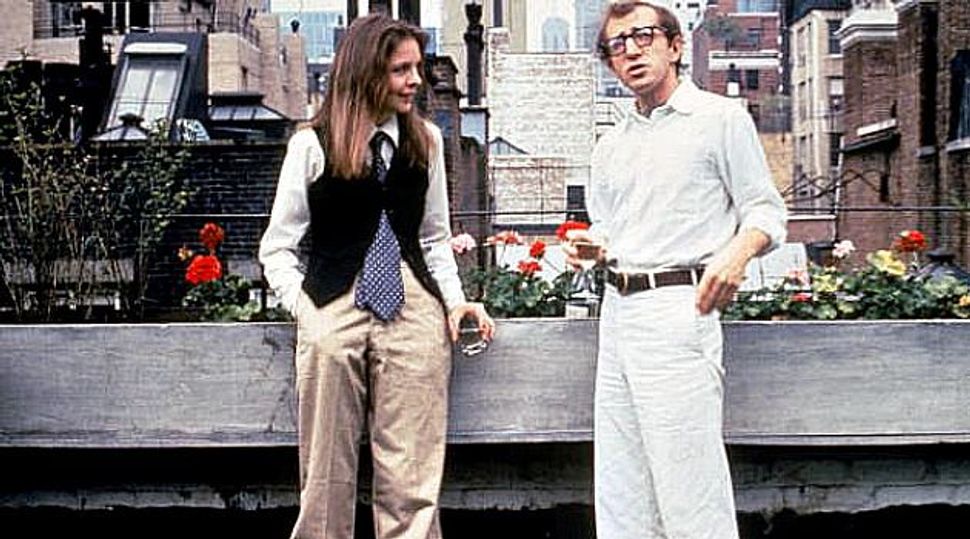 A still from the Woody Allen film “Annie Hall” represents a fading paradigm of intermarriage.

These days, more American Jewish women than men are marrying out, as the Forward’s Josh Nathan-Kazis recently reported. The story’s headline, “Jewish Woman Is New Face of Intermarriage, Pew Study Data Reveals,” led me to wonder: If Jewish women have become the demographic “face” of the phenomenon, will we soon become its cultural face as well? Will “intermarriage” now imply a Jewish bride? Will we be hearing from Alexandra Portnoy?

As it stands, there’s no cultural stereotype about Jewish women intermarrying. We find individual representations, but no consistent script. We might think of the cringe-inducing plot line in “The Brothers McMullan,” involving an Irish-Catholic man’s broken engagement to a rich Jewish woman. And, if we go back further to “The Way We Were,” there’s Barbra Streisand falling for Robert Redford, as one does, and marrying him, as one does if presented with the opportunity. “The Nanny” comes to mind. Also “Rhoda.” But there are too few examples for a cliché to have formed.

Stereotypes of Jewish women — and there are plenty — have historically related to how (some) Jewish men see Jewish women, rather than how Jewish women are seen more broadly. The general culture doesn’t seem all that curious about what, if anything, goes on between Jewish women and non-Jewish men.

“Intermarriage,” unless otherwise specified, refers to men marrying out. A 2012 New York Times article about Jewish-Asian intermarriage mentioned seven such couples, all Jewish men married to Asian women, yet made no reference to gender. For those of us who grew up with Philip Roth, Woody Allen, and “Seinfeld,” this default can feel eternal.

As I discovered while conducting dissertation research on this topic, the “belle Juive” (beautiful Jewess) trope was to early 19th-century French literature something like what the “shiksa” would become for American Jewish writers: an exotic object of desire, but also someone one might marry to affirm progressive, universalist ideals. Writers of Christian origin saw Jewish women as the key to Jewish assimilation.

Much like Muslim women in France today, Jewish women were imagined to be in need of rescue from their traditionalist male relatives. Meanwhile, few seemed curious about what, if anything, went on between Jewish men and non-Jewish women.

At the end of that century, French writers continued to depict this pairing, but now the women were presented as unattractive heiresses with decadent Catholic aristocrats. We see this in Paul Bourget’s 1892 novel Cosmopolis; C. de La Badine’s 1899 anti-Semitic essays, Sac à juifs; and more. These scenarios, in which an old-family name is exchanged for new money, drew condemnation from writers ranging from notorious anti-Semite Edouard Drumont to J’Accuse author Emile Zola. Zola’s 1903 novel Truth, a fictionalization of the Dreyfus Affair, praises Jewish intermarriage generally but is highly critical of that arrangement.

In 19th-century France, “intermarriage” implied a Jewish bride. But because France didn’t keep records of the religion or ethnicity of those entering civil marriages, we don’t know whether this reflected reality.

It is therefore possible for “intermarriage” to evoke something other than what it does in the United States today. So should we expect a shift?

I suspect not. Jewish women have been marrying out in significant numbers for decades, yet the cliché hasn’t budged. Contemporary shows like “The Big Bang Theory” and “Girls” continue to mention “shiksas.” In 2009, Judd Apatow referred to his wife as his “shiksa goddess.” The gendered intermarriage cliché may owe more to the gender breakdown of the entertainment industry than to representations mirroring realities. Movies and television shows on Jewish themes tend to focus on romantic intrigue that involves Jewish men.

How, then, will the culture account for all these Jewish women with Gentile husbands? Quite possibly, it won’t. Commenters responding to the above-mentioned Forward story saw fit to speculate that such women must have first tried to find a Jewish man. Only when faced with the choice between adopting a sixth cat or giving Christopher a chance did they resign themselves to the latter. I’m loosely paraphrasing the comments in question, but for a sense of what they do say, here’s part of one: “After being rejected by hundreds of Jewish men, what is [a Jewish woman] supposed to do?” Hundreds!

As long as Jewish women who marry out are imagined to do so only out of desperation, the cultural “face of intermarriage” will continue to be that of a Jewish man disappointing his mother.

Phoebe Maltz Bovy, a freelance writer, has a doctorate in French and French Studies from New York University.

Will Hollywood Get New Intermarriage Script?