Will Ukraine’s Revolution Be Good for Its Jews? 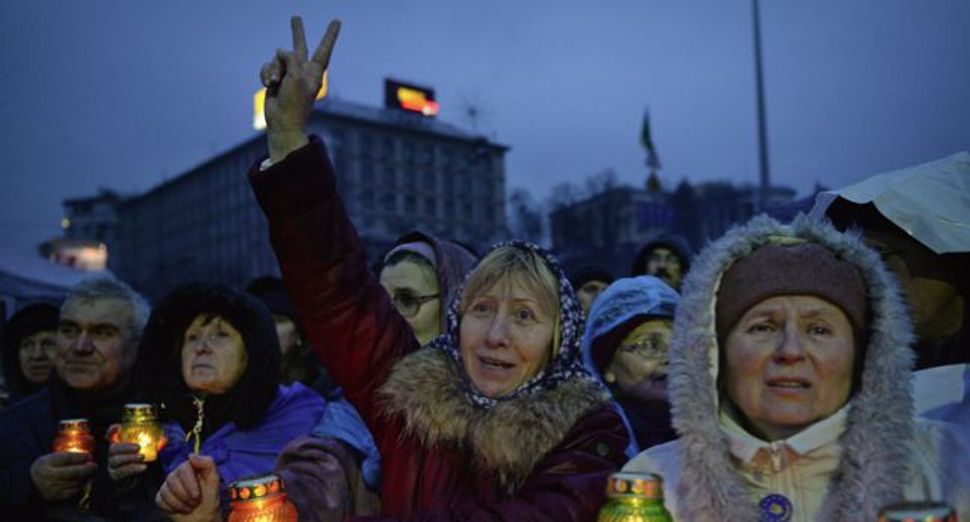 I teach modern Jewish history. Usually, when I mention Ukraine in class, my students’ eyes glaze over. But lately that hasn’t been the case. The eyes of the world have been turned to Kiev, the city that was home to Sholem Aleichem, and the birthplace of Golda Meir. People are now wondering whether this revolution is good or bad for the approximately 100,000 Jews who live in Ukraine.

The political parties that led the protest movement, and that have now assumed power, represent a wide spectrum of Ukrainian society. Anyone who was fed up with the corrupt, kleptocratic and dictatorial regime joined the protests. This included many good guys, and not a few anti-Semites.

Arseniy Yatsenyuk, head of the mainstream Fatherland Union party (whose previous leader, Yulia Tymoshenko, was released from prison last Saturday), is one of the good guys. He issued a strong statement against anti-Semitism on World Holocaust Remembrance Day, January 27, in the midst of the protests.

“The Maidan [the protest movement in Independence Square] does not accept ‘black hundred’ slogans,” he said, referring to the notorious anti-Semitic organization that flourished more than a hundred years ago in Tsarist Russia. “This protest has no place for hatred towards our compatriots based on their ethnic heritage, faith, or home region. We are all part of the Ukrainian nation.” He reiterated an offer to send defense units to protect synagogues during the period of unrest.

Yatsenyuk was himself — during the presidential elections of 2010 — the target of a whispering campaign that he was Jewish, and therefore not a true Ukrainian. As a friend of mine who lives in Kiev observed: “It’s totally false, he isn’t Jewish. He’s just a well-educated person.”

On the other hand, the Svoboda party, which was the junior partner in the protest movement (after Yatsenyuk’s Fatherland and Vitali Klitschko’s Punch party), is overtly anti-Semitic and, many would argue, neo-Nazi. Its party literature blames the Jews for the Bolshevik Revolution and Communist rule in Ukraine, and unabashedly uses the word zhidy (kikes). One of its parliamentarians published a Ukrainian translation of a collection of writings by Joseph Goebbels, and referred to the Holocaust as “one of the brightest pages in European history.”

Optimists like to point out that Svoboda only garnered around 10 percent of the vote in the last parliamentary elections, so the party is much weaker than analogous right-wing movements in Hungary or France. They also note that the Jews are far from being Svoboda’s top enemy: Russians, foreign immigrants, and homosexuals figure much more prominently in their pantheon of hatred.

Finally, the movement’s leaders were prudent enough to refrain from anti-Semitic pronouncements while speaking from the rostrum of Independence Square. They knew that their country needed Western sympathy and aid, and that railing against zhidy would only hurt their cause. But these are not compelling reasons to feel reassured.

Yatsenyuk’s Fatherland or Svoboda? Whither the Ukrainian revolution? Whether these two groups will continue to cooperate or go their separate ways now that the revolution is over is the $64,000 question. For everybody, but especially for Jews. If the partnership continues, the revolution will have betrayed its rhetoric of a democratic and pluralistic Ukraine.

There were two anti-Semitic attacks near Kiev’s Podol synagogue in mid-January, just after former President Viktor Yanukovych announced draconian laws against freedom of speech and assembly. Whether these attacks were carried out by right-wing oppositionists or by Yanukovych’s bands of hired thugs (known as titushki) is hotly disputed. Yatsenyuk charged that the assaults were “provocations,” part of the regime’s campaign of dirty tricks to frighten Jews and smear the protest movement in the eyes of the West.

Perhaps not surprisingly, the organized Jewish community was divided during the course of the revolution. One of the country’s chief rabbis, Rabbi Moshe Asman of Chabad-Lubavitch, called on Jews to flee Kiev and, if possible, the country. He asked the Israeli government to assist in their evacuation. The other chief rabbi, Rabbi Yaakov Bleich, an American-born Stoliner Hasid, expressed some sympathy with the protest movement. He sent one of his deputies to offer prayers to the demonstrators in Independence Square.

Leaders associated with Chabad-Lubavitch both in Kiev and Moscow have towed close to the Kremlin’s line that the Ukrainian revolution is run by fascists and neo-Nazis. Other Jewish leaders, such as Vadim Rabinovich, president of the All-Ukrainian Jewish Congress, didn’t take sides and issued pleas for reconciliation. Rabinovich is an interesting case. An oligarch with close ties to Russia, who made his millions under the previous regime, he gradually inched toward the opposition, and then toward acceptance of the new regime.

This Monday, with the revolutionaries in power, he issued a statement that “even in this complicated time of civil conflict, there is no basis for saying that there have been serious cases of anti-Semitism in Ukraine. I categorically reject the statements in the foreign press that there has been massive anti-Semitism and xenophobia in Ukraine.”

During the months of protests, most Ukrainian Jews felt that this was a fight they should stay out of. They didn’t trust either side. But there was a marked generational divide. Most older Jews are Russian-speaking, and support the former regime’s policy of close ties with Russia. They associate all forms of Ukrainian nationalism with the Nazi collaborators of the Ukrainian Insurgent Army during World War II.

Younger Jews are more integrated into Ukrainian life and culture. They yearn to see the country become a modern European democracy, and many of them participated in the demonstrations at Independence Square. One Jewish newspaper in Kiev published an interview with a young Modern Orthodox man who joined the opposition’s paramilitary organization. He considered his activity in defense of the demonstrators a sanctification of God’s name. The young man reported that his unit had four other Jews in it, all with Israeli military training, and that he had experienced no anti-Semitism in his dealings with fellow fighters.

The most ardent Jewish supporter of Maidan has been Joseph Zissels, chairman of the Va’ad—Association of Jewish Organizations and Communities in Ukraine. Since his days as a young dissident in the 1960s, Zissels has worked to bring together the Ukrainian and Jewish movements. He spent six years in the Soviet Gulag, and went on to found the Va’ad in 1989. Zissels argues that Jews and Ukrainians need to turn a new page in their relations, and overcome old grudges, suspicions, and stereotypes. Maidan represents integration with Europe, he says. That is good for Ukraine, and is especially good for its Jews.

On the night of February 20, after the bloodiest day in modern Ukrainian history, with more than 70 people dead in the streets of Kiev and society on the verge of civil war, the country’s most respected TV political talk show, “Freedom of Speech,” featured an interview with Zissels.

In its most trying hour, Ukraine turned to a Jew for wisdom and insight. He warned against vilification of any group, including Russians: “I don’t believe in collective guilt.” Now that the Ukrainian revolution is a fact, we can only hope that voices like that of Zissels will prevail.

David E. Fishman is professor of Jewish history at the Jewish Theological Seminary of America and a senior research scholar at YIVO. He directs JTS’s program in the former Soviet Union, “Project Judaica.”

Will Ukraine’s Revolution Be Good for Its Jews?