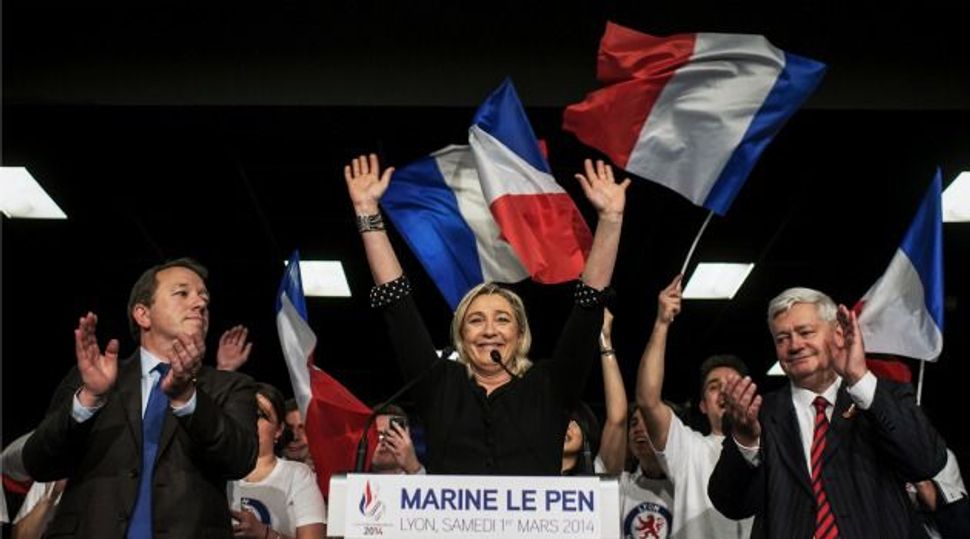 Marine Le Pen, the leader of France’s right-wing Front National party, is well known for her Islamophobic statements. This is a woman who has compared the presence of four million Muslims in her country to the Nazi occupation of France during World War II.

And yet, fully one third of the French population says it supports her ideas. Front National is expected to do very well in municipal elections this month and in EU parliamentary elections in May.

But what’s most worrying in all of this is that a growing number of French citizens see Le Pen’s ideas as acceptable, even if they don’t support the Front National. According to a poll released last month by Le Monde newspaper, 46% of the French population views the Front National as “the face of patriotic conservatives, with traditional values,” rather than as a party of the “nationalistic, xenophobic extreme right.” Only half the population thinks the party “poses a threat to French democracy,” while in the 1990s as much as 75% thought it did.

Le Pen’s party is now considered part of the democratic landscape; she has, in Le Monde’s words, a “normalized image.” Of course, what this really means is that Islamophobia is going mainstream. And that is — or should be — very disturbing from a Jewish perspective.

To begin with, Front National has a history of anti-Semitism. Founder Jean-Marie Le Pen, Marine’s father, defended Vichy’s collaborationist government, which sided with the Nazis. He was found guilty of Holocaust denial, which is a crime according to the French law. He was also quoted as saying that the Nazi occupation of the country, which saw 76,000 French Jews deported to concentration camps, was “not particularly inhuman.”

To be fair, Le Pen has somewhat curbed the incendiary rhetoric that characterized the Front National during her father’s reign. In fact, many analysts attribute the party’s jump in the polls (12 percentage points since Marine’s 2011 takeover) to the younger Le Pen’s more mainstream image. The British Times even described her as the “respectable face of the right.”

And Marine Le Pen has so far avoided anti-Jewish language — although she does support a kippah ban. Instead, she seems to save her energy for attacking Muslims.

So some Jewish leaders seem to think they can relax when it comes to Le Pen. “Anti-Semitism is no longer a main characteristic of the Front National,” Richard Pasquier, the president of the Conseil Représentatif des Institutions Juives de France, the country’s largest Jewish organization, said in 2012. There are anti-Semites in the party, he admitted, “but they are not the majority.”

Unfortunately for France’s Jews, these two issues are actually not as separate as they may seem.

To some extent, anti-Semitism and Islamophobia are two sides of the same coin. Statistically, it has been noted, “the strongest predictor of prejudice against Muslims is whether a person holds similar feelings about Jews.” The more you dislike Jews, the more you are likely to dislike Muslims as well, and vice versa, a 2010 Gallup poll found.

What’s more, if placing the blame for the problems of a whole nation on a particular minority is increasingly considered “acceptable,” “mainstream,” and “not a threat to democracy,” then all minorities have reason to be concerned — because this paves the way for all kinds of scapegoating.

What should really worry us as Jews, then, is not just that some French people are scapegoating Muslims for the current economic crisis, but that most French people, or at least half of them, don’t seem to think that’s such a big deal.