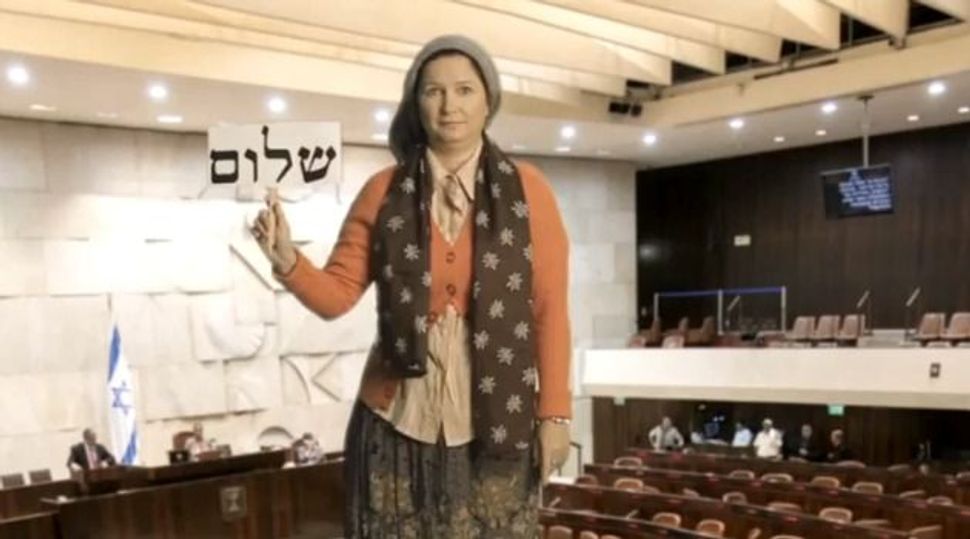 A new plea for Israelis to push toward an agreement with the Palestinians has been launched in the form of a Purim video sponsored by the Israeli group Peace Now. Called “It’s fun to be a rightist” and set to the song “Got my mind set on you,” the video is an unsubtle sendup of the settlers and their Knesset backers.

With the Israeli peace group already marginalized in mainstream Israeli affairs, deciding to openly mock their opposition is a risky strategy. Looking closer, though, it’s a message that may serve to skewer the whole nature of domestic ideological clashes in a conflict zone.

The video opens with Yossi Belin — now visibly older than he appeared during the height of his peace process involvement in the early 1990s — getting dressed up as a West Bank settler for a television spot. With an army-issue parka, wearing socks and sandals and a knitted kippah, Beilin-as-settler exclaims, “Isn’t it fun for me that there’s no partner, and that the Arabs understand only force and bombs! Because otherwise, what would I have to scare you with? Monsters?”

“It’s fun, convenient and comfortable to be racist and destructive. It’s fun to be a rightist. So what if it’s inflammatory and beyond the realm of reason?” the jingle continues.

The “rightists” are spoofed with phrases such as, “You built our new highways, and gave up on an apartment so I can sit here [in my balcony in the West Bank]. Nice, isn’t it?” And “if you dare speak of peace, we will legislate against free thought.”

The segment concludes with Avram Burg, former Knesset speaker and an outspoken proponent of peace, removing his judge’s wig (having impersonated the Supreme Court president Asher Grunis, widely regarded as supporting settler aims) and placing his own trademark kippah back on his head after musing, “Isn’t it great that we have democracy, justice and law? Even if it all ends at the Green Line.” Several current Labor and Meretz MKs appear as well. After railing against the anti-left epithets of the right (“traitor” and “anti-Semite” are two), the group of past and present MKs and Peace Now activists wishes viewers Happy Purim!

Will the video achieve what Peace Now hopes it will? There are a couple of angles we need to consider.

However light and entertaining on its face, the initiative is clearly a rearguard action against a feeling of being hemmed in by an Israeli public whose apparent willingness to abide by the status quo only bolsters the agenda of the Israeli right. There is of course bitter irony here. While the messages of the pro-peace left are not quite reflected at the polls (roughly one-third of the current Knesset seats could be considered pro-two-state solution) the message of Peace Now is actually well within the Israeli consensus on the Israeli-Palestinian endgame — never mind the aims of U.S. foreign policy and the stance of the international community. A solid majority of Israelis still supports the two-state solution.

Where the video falls short, though, is in examining a deeper and more complex message of Purim that I try to take to heart: the idea that the superficial inversions that we attempt in the form of costumes (and tippling) may be an opportunity for a deeper awareness of other aspects that reside inside of us — often motivations or characteristics that are cloaked in fear.

In dressing up as the right wing and simply mocking it, Peace Now isn’t sufficiently allowing itself to really try on a different identity. While it’s true that the settlements enjoy government subsidies even as housing prices soar within the Green Line; and while the echoes of traitor language ring loud in the collective memory of a country scarred by their prime minister’s assassination; and while policies built on fearmongering do not a healthy country make, we need to remember that the left-right policy debate in Israel is deep and raw.

Until then, another Purim holiday will come and go in Israel and across the Jewish world, with celebrants trying on other personas and other ideas. Perhaps now is the time to think about how those other personas really operate. It may not be as fun as it feels to sing about “being a rightist” for three-and-a-half musical minutes, but it may be a necessary, internal step to Israeli-Palestinian conflict resolution.