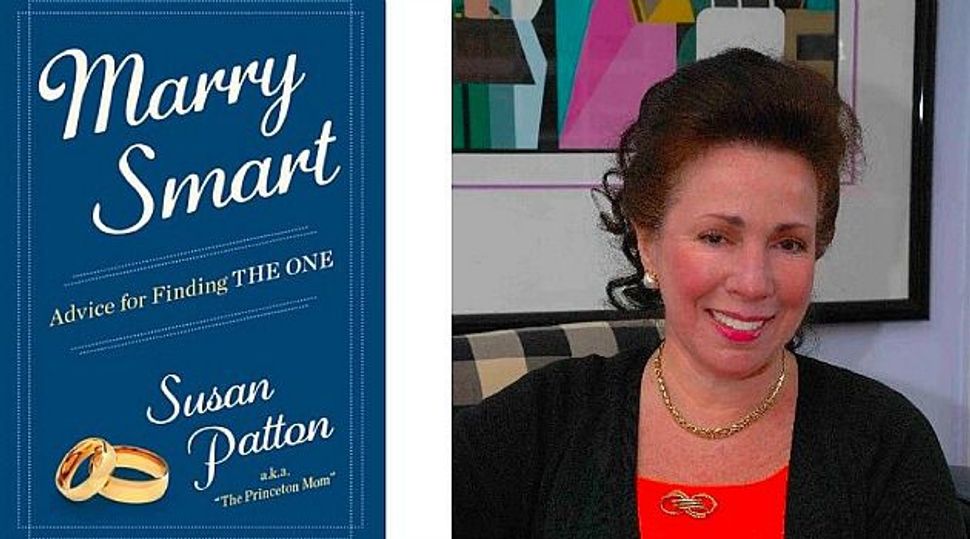 Princeton Mom Susan Patton is back. The Jewish mother of two boys, Princetonians natch, just came out with a book called “Marry Smart” in which she expands her letter that launched a thousand blog posts about why young women should find husbands in college into a 200-page treatise.

In the book, she reups her original thesis about how college-aged women at elite universities should be put more energy into finding a mate than into their studies – 75% to 25% to be exact, according to Patton’s calculations. She also adds a few garnishes to her suggestions, including telling women to get any plastic surgery in high school so they look as good as possible for college, avoid casual sex and putting themselves in any situation in which they might be sexually assaulted because she doesn’t buy the idea that the victim is always blameless.

It should come as no surprise that Patton’s publicity tour has been met with a chorus of gasps and a legion of furrowed brows. This advice sounds so retrograde in an era of “The End of Men” and “Lean In” that is hard not to take offense. And yet, she is one of many reactionary women proffering equally backwards advice to young women, including a whole submissive wife movement. What makes Patton’s suggestions a scab that we just can’t help but pick?

Before I answer that question I want to clear up what she is and isn’t saying. Many of her critics claim Patton is going back to the idea that women should go to college to earn a Mrs. Degree, but that isn’t exactly the case.

Patton is suggesting that women prioritize husbands over professional ambition. But this is not because she thinks having a husband is the end-all in female achievement. Patton herself has had a long, successful career in human resources, and back in the early 70s she emancipated from her Holocaust surviving parents in order to attend Princeton. Instead, Patton believes that women are better off if they nail down the whole family thing first, because it is harder to meet a good mate and have kids further down the line.

Though being married with kids isn’t quite enough for Patton. She also wants young women to marry their intellectual equals, and warns them that they will never encounter as high a concentration of like-minded, age-appropriate guys outside of the Ivy League setting. (Apparently she has never been to Park Slope.) It’s easy to get offended by her elitism here, and this is not to mention her denouncement of interfaith and interracial relationships later in the book, but the fact is that women are already doing exactly what she is encouraging them do: marrying their equals. Men and women are increasingly marrying partners who are from a similar financial and educational background and who are a similar age.

Does Patton take this all too far? Like most people who get fast book deals and morning show spots from an online advice piece that went viral, yes. Of course. But buried in all her talk about “husbands, husbands, husbands” and “kids, kids, kids” is a seed of a conversation many are longing to have. After decades of focusing on female ambition and breaking glass ceilings, it remains very tricky to discuss the personal ambitions of women without sounding old-fashioned or anti-feminist.

Patton’s deepest desire, after we scrape off the offensive and sensational layers, is for women to be happy. She believes, like almost every Jewish mother I have ever met, that marriage and kids will make them just that.

I agree with Patton’s end goal here. Marriage and kids is what many women, feminist women, want, and that’s okay. (It is also, of course, completely okay to not want those things and does not make a woman any less of a woman.) The fact that, demographically speaking, many of my peers (educated, professional women – you know, feminist types) are embracing marriage more than ever, suggests that I am not alone. I just don’t think Patton is presenting the right road map.

Patton insists on the importance of marrying an equal, but we can’t really do that until we know ourselves enough to figure out what that means. College and the years following it are just the time to do this, to figure out if that acting thing is a phase or a passion, if big city life isn’t for you after all, or if that fast-paced job on Wall Street is a little too much like the movies to actually be sustainable.

I followed none of Patton’s rules. I happily dated guys with whom I saw no long-term future in college, spent my early 20s traveling and getting, yes I admit, a fairly useless degree in Latin American literature, and then, eventually dating and marrying a an Ivy-league man. Despite my state school degree, which renders us unequals according to Patton, we are pretty happy, and the fact that we married later means our chances of staying married are higher.

The thing everyone needs to remember, both the Sheryl Sandbergs and the Susan Pattons of the world, is that work/life balance isn’t a zero sum game. Our personal experiences can have a profound effect on our professional ones and vice versa. Leaning in to one can yield benefits for both. This is especially true in our 20s when we are figuring out who we are and how we love, but it is also the case as we have families of our own. Partitioning the two, emphasizing work before family or family before work, only contributes to the fragmentation of the self that working women have been feeling to for far too long.