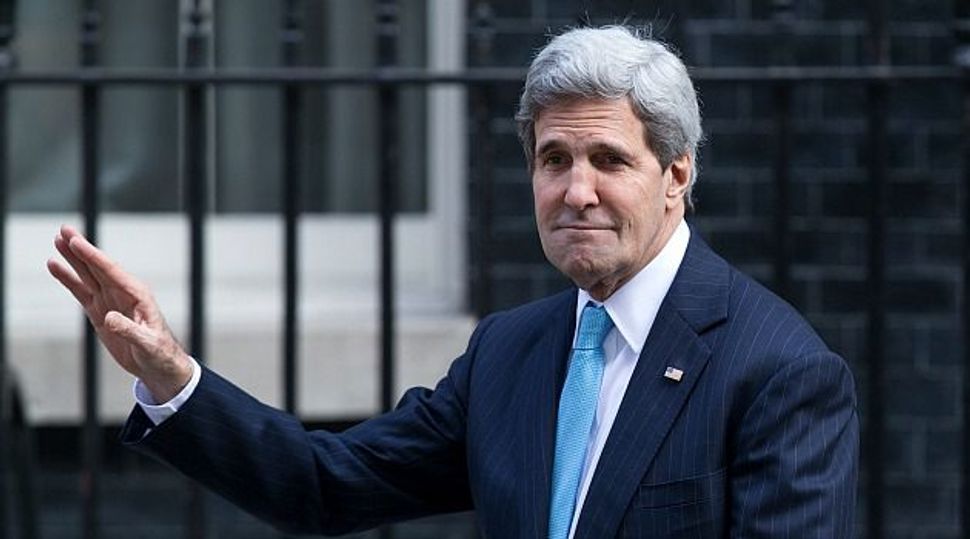 Nobody, it’s fair to say, ever went broke betting against the Israeli-Palestinian peace process. You could put even money on a sudden meltdown, a theatrical explosion or a quiet fade-out. Just don’t bet on success. Nobody wins.

Right now the heavy betting is on how soon the Kerry initiative will collapse and who’ll be blamed. The secretary of state started off last summer aiming for a permanent peace agreement by this April, then downsized to a “framework” for continued negotiations. Now even the framework is iffy. The left says it’s too pro-Israel. The right says it’s too pro-Palestinian. Kerry himself told a congressional committee March 12 that he’d never seen mistrust anywhere of the sort he’s seeing between Israelis and Palestinians.

A poll released the previous day by the liberal Israel Democracy Institute showed how broad the mistrust is: Two-thirds of Israeli Jews (and 54% of Israeli Arabs) don’t trust Kerry.

Does anybody see any good emerging from this mess?

Actually, yes. Former Shin Bet chief Ami Ayalon does. He was in New York March 11 touting a plan to turn Kerry’s lemon of a peace initiative into lemonade.

Ayalon admits it’s a mess. “The administration lost a lot of credibility with Israelis when Kerry came last year and said within nine months we’ll achieve what we didn’t achieve in 20 years. It was more than naïve.”

Today, with the Middle East sliding backwards into violence and instability, with “the increasing power of Muslim fundamentalism and the decreasing power of political leadership,” leaders don’t have the authority to take hard decisions.

“This is why Abu Mazen [a.k.a. Palestinian leader Mahmoud Abbas] can’t give [Benjamin] Netanyahu what he offered [Ehud] Olmert five years ago and why Netanyahu can’t give Abu Mazen what Olmert offered.”

What’s needed, Ayalon says, is a “change in the architecture” of Middle East diplomacy. For decades leaders have insisted on resolving the conflict through direct negotiations — “the two sides will meet, confidence will be created and things will move. It’s never worked. It collapsed repeatedly. Each side was held hostage repeatedly by its extremists. But direct negotiations became a principle in their own right.”

Israelis and Palestinians became prisoners of a failed paradigm, doing the same thing over and over and expecting a different result. That’s Einstein’s definition of insanity.

In fact, Ayalon argues, the idea of a negotiated two-state peace pact simply isn’t plausible. “No state was ever created as a result of negotiations,” he said.

But Kerry’s framework could change the architecture. The secretary spent the last eight months probing the two sides, learning what they want, what they can live with and what they can’t live with. The framework is a general outline of what a permanent solution should look like.

What it doesn’t say is how to get there, which reflects a harsh reality. “Between 60% and 70% of the population on each side would be willing to accept the other side’s bottom line,” Ayalon said, “but neither side believes that the other side means it.”

If the framework is put in writing and adopted formally by the United States, the Quartet and the United Nations, “then for the first time we will have a clear goal.” Then the sides can begin taking their own steps, acting independently, coordinating with each other but without waiting for the other’s approval. Ayalon calls this “constructive unilateralism.”

“Every independent step that each of us takes to bring us closer would be approved and compensated,” Ayalon said. “Steps that take us further away will be disapproved. Once you have a clear goal you know what is negative and what is positive.”

Born in Tiberias in 1945, raised on a nearby kibbutz, Ayalon was a career naval commando who rose to become commander of the Israeli navy. In 1996 he was tapped to rescue the Shin Bet, Israel’s internal security service, which had been shattered by Yitzhak Rabin’s assassination. Retiring in 2000, he partnered with Palestinian academic Sari Nusseibeh to form The People’s Voice, which collected nearly a half-million signatures on both sides for a model two-state peace agreement they drafted. In 2003 he gathered his fellow ex-Shin Bet chiefs for a group interview in Yediot Ahronot that eventually inspired the film “The Gatekeepers.”

In 2006 he entered the Knesset with the Labor Party, narrowly lost a leadership bid to Ehud Barak, briefly served as a minister and left politics in 2009. Since then he’s been working with an organization he created with several partners, Blue White Future, to promote constructive unilateralism.

An example of a constructive unilateral step, he suggests, would be “for Palestine to become a member of the U.N. — on condition that it be committed to negotiate a final settlement based on the framework.”

Up to now Israel has opposed Palestinian U.N. membership “because it was not a result of direct negotiations.” With a framework in place, Palestine would have its international responsibilities defined for it. And Israel would have a real partner to negotiate remaining issues, from borders to water rights.

“Statehood would dramatically change relations between Fatah and Hamas,” Ayalon said. “It would give legitimacy to the Palestinian leader. And it would make it much more difficult for him to demand the return of his people to my state.”

On the Israeli side, once the framework defines the basic outline of the border, “the prime minister can declare that we will not build on the east side of the security fence, but we will continue to build on the west side.”

Ayalon is currently pressing the Knesset to enact a voluntary relocation law that offers a package of compensation, housing, job training and counseling to Israelis living east of the fence — the 100,000 or so settlers whose homes would likely end up in the Palestinian state — who choose to move back to Israel proper right now.

The plan is not another failed Gaza-style withdrawal. Evacuation would be entirely voluntary. Those who want to wait and see can stay put. Israeli troops would remain in place until a peace agreement is signed.

But by passing the law, Ayalon would be sending several messages. “First, to the settlers: We sent you. Now we have an obligation to bring you home with dignity.”

Second, “the Palestinians will be shown for the first time Israeli settlers pulling out not as a result of violence” — most Palestinians, he said, believe the Gaza withdrawal was a response to the Second Intifada — “but as a result of Israeli commitment to a two-state solution. This will empower pragmatism.”

Blue White Future conducted a series of surveys among settlers east of the fence in 2008, 2012 and 2013. The cumulative findings, released March 17, showed that just under 30% would be willing to relocate, even without a peace agreement, if the government offered the resources. The figure rose to 50% if a peace agreement were reached.

If 30,000 settlers were to begin voluntarily returning home to a dignified reception, Ayalon says, it would utterly change the momentum — within the settler community, within Israel, in the region and internationally. It’s not a sure thing, but it’s even money. That’s as good as it gets these days.