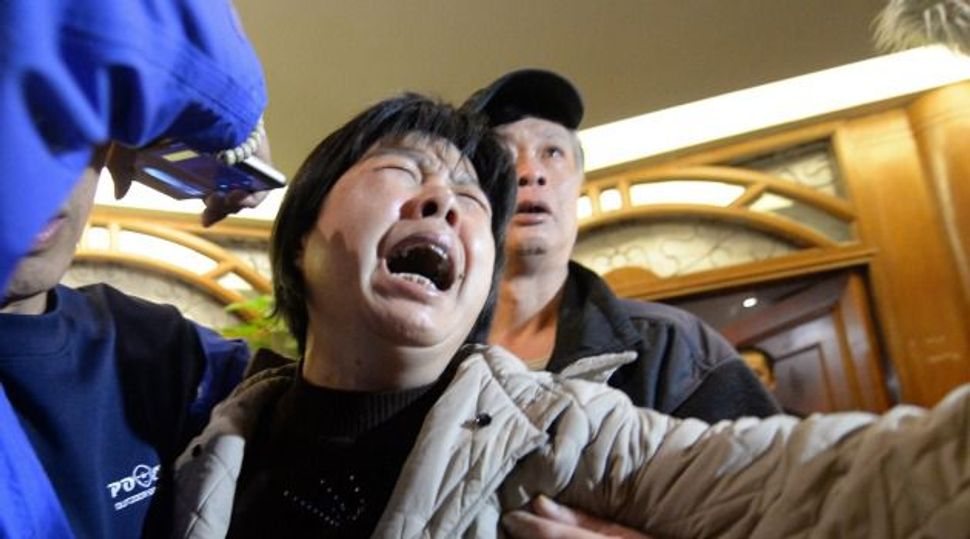 Unending Grief: A passenger?s relative weeps after authorities say they believe Malaysia Airlines Flight 370 crashed in Indian Ocean, killing all those aboard. Image by getty images

(Haaretz) — While the world anxiously awaits information regarding the mysterious disappearance of Malaysia Airlines Flight 370, a perplexing Jewish angle to the story has emerged.

In short, a Jewish traveler who is not Sabbath observant was booking a flight through a Jewish travel agent. The traveler planned on flying on Flight 370 on the Sabbath, but the travel agent was uncomfortable booking travel for a Jewish passenger that would violate the prohibition against flying on the Sabbath. The traveler agreed to take a different flight and was spared whatever horrors the passengers of Flight 370 are experiencing or have already experienced.

The story is being cheerfully passed around the Internet and its lesson is ostensibly that Sabbath observance saved the traveler’s life. This is a terrible lesson. While it is true that the observance of the Sabbath has the practical effect of sparing this traveler’s life, it is extremely dangerous to attribute salvation to a particular religious observance.

Every religion has stories of miraculous salvation. The hubris of Jewish people pointing to this miracle as some sort of support for Jewish religious beliefs faces an unanswerable question when confronted by stories of similar salvation from other religions. One Christian published a book about how Jesus saved him and U.S. Airways Flight 1549 because of his faith in God. Muslims often point to Mosques that survive natural disasters as proof that God saves Muslims.

There is nothing unique about a story of someone who did not travel on the Sabbath and was spared from a disaster. It is a common and fallacious claim to say that not being present or being spared from any particular harm is the hand of God saving the saved for religious reasons.

If, as believers in Judaism, we reject the claims that Jesus or Allah spared their followers how do we blindly accept that our God saves adherents to Judaism? What are we to say about Sabbath observant people who die in plane crashes? Or non-observant people who survive because they missed their flight? The application of miraculous salvations to one person of one religion out of millions of counter examples is disingenuous and incredibly arrogant.

Even worse is the implication of such a claim. If God saved one person from the plane for observing the Sabbath, we are also saying that God caused the other people on the plane to suffer whatever harm has befallen them. This is a disturbing worldview that even if we believe to be true, is quite offensive to the family and friends of the passengers of Flight 370. In our zeal to proclaim that our beliefs save lives, we are in effect condemning others to death for their religious beliefs. This is not a message that we should feel comfortable projecting.

Further, the religious arithmetic is incorrect. Boarding an airplane on the Sabbath is forbidden according to Jewish law. However, the prohibition is almost certainly Rabbinic. It might even be permissible according to some rabbinic opinions posited by the great Rabbi Eliezer Yehuda Waldenberg in his Halakhic work Tzitz Eliezer. Rabbinic prohibitions on the Sabbath are common and it’s safe to say that almost anyone who is not consciously trying to avoid violating a rabbinic decree on the Sabbath will inevitably violate the Sabbath. In fact, it’s likely that the traveler who stayed home violated Torah prohibitions on that particular Sabbath. If he cooked a meal, or drove a car, or signed his name in ink he violated the much more severe Torah level prohibition of not breaking the Sabbath.

So while it is indeed laudable that the traveler did not violate the possible rabbinic prohibition of boarding a plane on the Sabbath, it is extremely unlikely that he actually kept the Sabbath according to Jewish law. It just doesn’t seem to compute that even assuming that God saves Sabbath observers, but not others, from peril, that our traveler would be spared for not breaking the Sabbath in one way but breaking it in another way that likely involved greater violations of Jewish law.

Finally, I am afraid that stories like this give people the impression we should keep the Sabbath so that we are saved from incidents like Flight 370. This is entirely false. God commands the Jewish people to keep the Sabbath. Several reasons are given in the Bible and the rabbis of the Talmud and their successors provide other lessons and meaning to Sabbath observance. None of our sources teach that the Sabbath is to be observed so that God will save you.

Sabbath observance is not a charm or talisman. Making the Sabbath into an amulet is religious malpractice that detracts from its innate beauty and vibrancy. It is downright offensive. It’s akin to saying the Mona Lisa is beautiful because it wards off the evil eye or that Niagara Falls is awe-inspiring because its waters can heal the sick.

What are we to make of this story? Nothing really. Things happen. It was noble of the travel agent to suggest keeping the Sabbath in a pleasant way and it was nice that the traveler valued the Sabbath enough not to travel. The traveler should feel grateful that his choice to connect with his Jewish roots might have spared his life. But we who hear the story dare not conclude with any certainty that God saved this one traveler for this or any particular reason.

Most importantly, we must not turn the Sabbath into a magic trick. The Sabbath its own eternal meaning. Let’s explore the rich tradition of the Sabbath and soar to the heights of one of the great spiritual gifts of Judaism, the Sabbath.