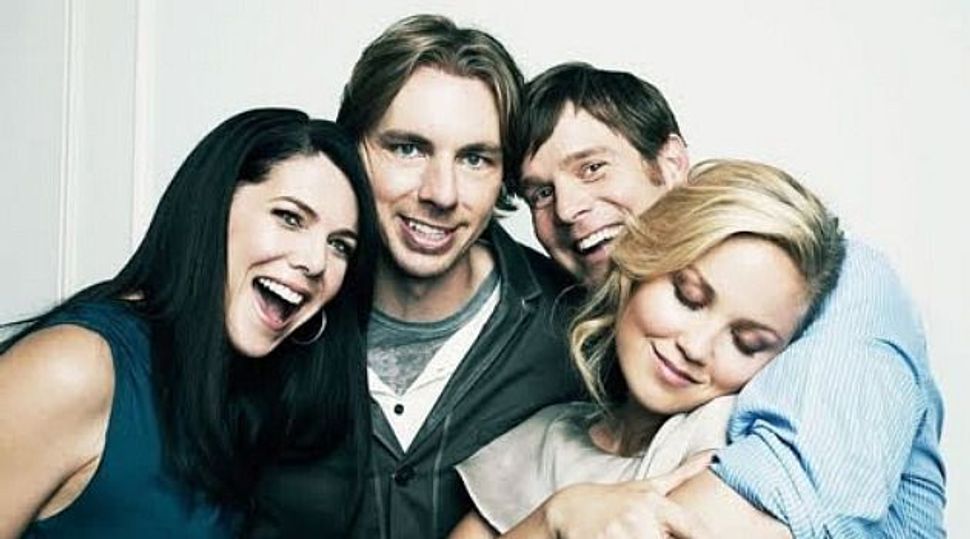 If you don’t watch the NBC show “Parenthood,” you should. It can make a grown man cry. Or maybe I just know especially sensitive men. Either way, it is the most poignant and sincere portrayal of family life I have seen in a very long time.

The show follows the goings-on of the three generations of the Braverman family. There’s the matriarch and patriarch, bohemian Camille and old-fashioned but still lovable Zeek; their four kids, and their nine grandchildren, all of whom seek refuge from whatever heartbreak and sorrow has befallen them in the dusty driveway of the family’s Berkeley home. The Bravermans aren’t Jewish, but the show is written by a Jew (Jason Katims, who also wrote the TV series “Friday Night Lights”), which accounts for the you-can’t-hear-yourself-think-everyone-is-so-loud-at-the-dinner-table-and-yet-somehow-all-feels-right-in-the-world vibe so familiar to us.

As its title suggests, “Parenthood” primarily chronicles the challenges of having kids. These plot lines are touching, but they aren’t what make me cry. What gets me are the relationships between adult siblings.

This is partially because the show is just that good at portraying the particular combination of wretched insecurity and a sense of true belonging that only our siblings can inspire in us, and partially because this is a dynamic that often remains unexplored in popular culture. We have largely written siblings out of our life scripts, fictional and not. And when they do make their way onto the screen, they are often reduced to portraying petty rivalries. “Parenthood” is a reminder of why we should do exactly the opposite.

Toward the end of the second season of “Sex and the City,” Carrie Bradshaw stumbles — sporting Manolos, of course — upon this epiphany: “The most important thing in life is your family. There are days you love them, and others you don’t, but in the end they’re the people you always come home to. Sometimes it’s the family you’re born into, and sometimes it’s the one you make for yourself.”

Carrie is the epitome of the “orphanized” urbanite who fully detaches from her past and then harnesses the power of New York City to fuel her reinvention. Like so much on that show, the absence of family or of even any history in Carrie’s life is taken to an unrealistic extreme. Still, this is one aspect of her situation with which a lot of us have something in common.

These days, many of us feel closer to friends and even colleagues than to our siblings, and we view this as a good thing. We are living during a time of unprecedented choice; everything from women’s rights to religious beliefs are defended in this context, so why shouldn’t this atmosphere of choice be spread to the construction of our families? Who needs the people we were raised with, with whom we have deep roots, when we can start over with new families of our devising?

The answer — and if you don’t believe me, watch “Parenthood” — is that there is distinct value to siblings, and part of that value can be found in their inconvenience. Our chosen families just don’t have the capacity to challenge us like the brothers and sisters who have known us our whole lives.

Our siblings often occupy the unique position of being people who are fairly different from us and yet still know us better than anyone else in the world. That’s a good person to know.

The problem with exclusively relying on our chosen families is that these people tend to subscribe to the exact same set of fictions on which we all unconsciously rely in order to contextualize our lives. These stories are necessary, and inevitable, but that doesn’t mean it isn’t good to have them burst open once in a while, and who better to do this than our siblings? They are the ones who can get us out from behind the masks we wear, and confront ourselves in a deeper, more honest way.

And then there is the very special source of comfort that can be provided only by someone who knew you as a child. This can’t be overstat ed. The weight of the past, of shared beginnings, creates a bond that many of us couldn’t undo if we tried. And many have tried. As Zadie Smith describes this bond in her novel “On Beauty”: “He did not consider if or how or why he loved them. They were just love: They were the first evidence he ever had of love, and they would be the last confirmation of love when everything else fell away.”

In a recent episode of “Parenthood,” we see all this play out. The youngest sister, Julia, is in a bad state. Her marriage is falling apart, and the combination of shock and denial all but paralyzes her. It is her siblings who push her to realize that she needs to take some responsibility for the dissolution of her marriage, and it is her siblings who cheer her up through wine and dancing. It is this combination of the forced confrontation with self and the atmosphere of acceptance when you do finally let it all out that makes siblings, real siblings, very worth keeping around.

It’s no coincidence that a show like “Sex and the City” captured our imaginations during an economic boom time. The specter of choice is most attractive when security, financial and national, is a nonissue. But in the past half-decade we’ve done a lot of growing up as a nation, and have been forced to confront the fact that there are many things that are outside our control. That narrative of individualism and the self-made man or woman now falls flat in an atmosphere when a whole generation of college grads can’t even find a job — let alone have their own apartment, and a closet full of shoes — and when self-curated families and a generation of boomers have to postpone their retirement.

Much of the appeal of “Parenthood” is the way it rejects that individualism that has been so favored in recent years, and instead explores the blend of deep inconvenience and absolute relief that is the product of being bound to others. And nobody knows us deeper, and longer, than our siblings.