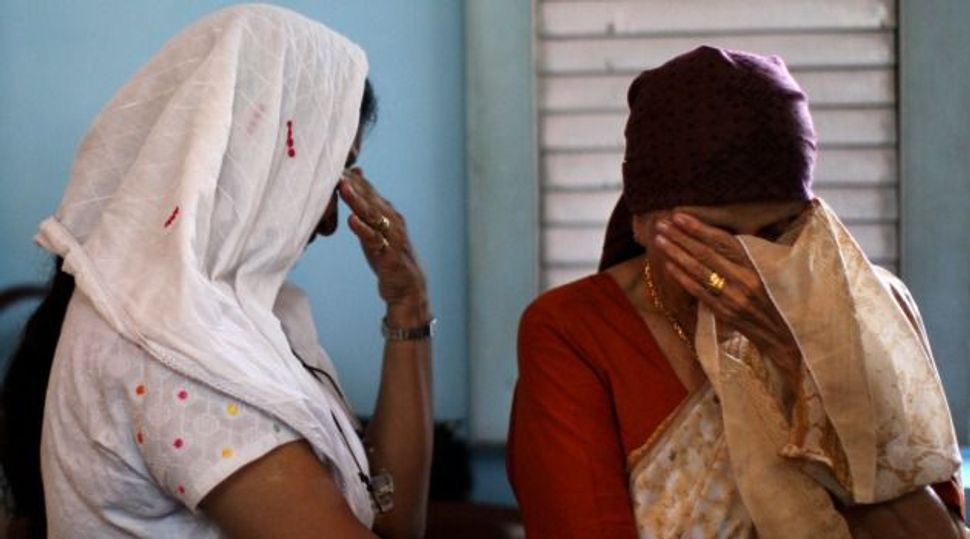 “What are you doing?” I asked my grandmother.

Sitting across the table from her at last year’s family Passover Seder, I had been watching with rapt attention as she peeled an egg — a commonly featured food on the Seder plate. She was handling it with a degree of carefulness that bordered on the neurotic, making sure to capture every tiny bit of shell in a napkin she held open in her other hand. She refused to even answer my question until after she had hurried from the dining room to the bathroom to flush the napkin down the toilet.

When she sat down again, she wasn’t sure how to answer me. “I don’t know why I’m so careful,” she said. “It’s something my mother used to do, and I learned to handle food from her, so I do it too.”

My grandmother’s mother, a Bombay-born Jew, lived most of her life in India and raised her family in that country’s then-flourishing Jewish community. That’s why my family still cooks and eats Indian cuisine. It’s why our main course that night was not brisket but imtabaq, a layered mixture of tomatoes, potatoes and beef. And why, instead of the apple-based haroset, we had haleq, the sweet syrup made from dates and walnuts that I spend all year craving.

Then my father piped up, saying, “It’s Kabbalistic.”

A former professor of Jewish mysticism, he explained that my grandmother’s way of handling an egg is rooted in the mystical idea of Shvirat Ha-Kelim, the Shattering of the Vessels. According to Lurianic Kabbalah, when the light of the divine poured down into the ten vessels that gave rise to all of creation, the force of its holiness shattered them. Bits of the broken vessels — kelippot — went tumbling down into darkness. That was the beginning of evil.

My grandmother may not know it, he said, but she’s careful not to let a single shard of shell escape because of a fear, ingrained deep in her family, about allowing evil to creep into the world.

I sat in silence for a second, savoring the idea of a mystical tradition that is passed down, albeit unwittingly, from grandmother to mother to daughter. Growing up in the Orthodox world, I was taught to see male text study as the ultimate means through which Jewish tradition is created and preserved. I loved the thought of it being transmitted matrilineally — not through men who had their heads bent over books, but through the hands of women working in the kitchen.

But then I remembered that my grandmother’s mother was not an educated woman. “This Kabbalistic idea,” I asked, “how could she have known about it?”

My dad looked at me quizzically. “Didn’t you know that your great-great-grandfather was a famous Kabbalist in Bombay? That the Jews of the city would come to study mysticism with him? That his home was known as Beit Kabbalah — the House of Kabbalah?”

My very mature response, if I remember correctly, was something along the lines of, “Um, no!”

Unruffled, my dad went on to tell us that, according to family legend, my great-grandmother’s father — the revered Kabbalist of Bombay — died when someone interrupted him in the middle of a meditation practice. Engaged in the dangerous spiritual work of uniting the letters of God’s name, his soul had been up on a higher plane. When someone yanked it back down to Earth by entering the room without warning, he died.

As my sister and I stared at my father in shock, he explained that he got his first inkling of our family’s mystical roots from his grandmother. “One time, when I was visiting her, she went all pensive and weird on me,” he said. “Suddenly, she asked, ‘What does sod mean?’ When I said ‘secret,’ she seemed pleased for some reason.” Sod, in the Kabbalah, refers to a deeper mystical understanding of Judaism. As a kid, she must have picked up the word in her house and tucked it away in her brain. But — perhaps too scared after what happened to her father — she had never dared to find out what it meant.

My sister and I looked at each other, and in her eyes I saw that she was thinking the same thing I was: “You’re telling us all of this now?!”

I turned back to my grandmother. “You’ve been holding out on us! Why didn’t you tell us this sooner?”

Her bewildered shrug cut into me as painfully as if it had been a slap to the face. That gesture said it all: You didn’t ask.

I glanced around at the Seder table then, taking in its full and deliberate weirdness — foods and customs trotted out exactly once a year, with the sole purpose of getting children to ask: Why are we doing this strange thing all of a sudden? (It’s so that the parents can then answer: Once upon a time, we were slaves in Egypt, and God brought us out with a mighty hand and an outstretched arm.)

As the youngest member of my family — the one who has always been tasked with reciting the Ma Nishtanah, the four questions inquiring about “how is this night unlike every other night” — I found myself reeling. I think of myself as a writer, an observer, but it had taken a ritualized meal to get me to properly attend to the details of my own life — to arouse my curiosity and make me ask the questions that I should have asked years ago. Realizing that it was my own complacency that had barred me from my family’s most interesting stories, I felt ashamed.

Ashamed — and also immensely grateful. Grateful to Jewish tradition for containing built-in mechanisms specially designed to reawaken our curiosity. And grateful to all the women of my family, whose hands preserved these rituals across generations and continents so that, watching them work away at an egg, I could one day ask why.