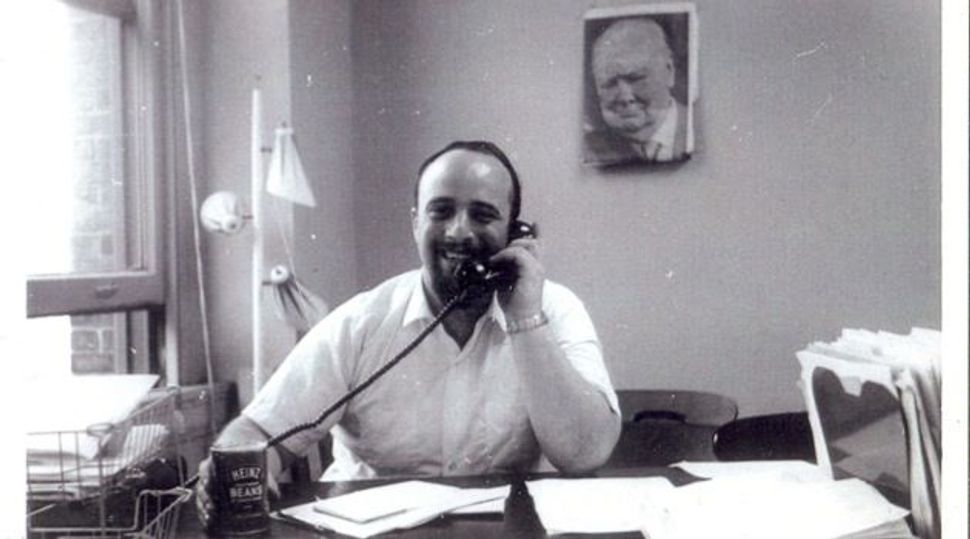 Happy Warrior: Yaakov Birnbaum in his office in September 1965. Image by Courtesy of Freda Birnbaum

On the morning of May 1, 1964 — almost exactly 50 years ago — an unusual sight greeted anyone walking along 67th Street on Manhattan’s Upper East Side.

A thousand young men and women in two neat rows, dressed like they were heading off to synagogue, the boys in skinny black ties, the girls in pumps, marched silently in front of the Soviet mission to the United Nations. This was the very first public protest on behalf of Soviet Jewry.

But perhaps stranger even than the sight of the students — who looked identical in seriousness and gesture to their cohorts then on the front lines of the civil rights movement — was the figure at the head of the marchers: a tall, broad shouldered Englishman named Yaakov Birnbaum, then in his late 30s but with his thick black Van Dyke beard and panama hat looking even older.

Birnbaum died on April 9 at the age of 87. That moment fifty years ago, at the birth of his new organization, the Student Struggle for Soviet Jewry, would set the course of his activist life in motion. And though the memory of his role as the father of the Soviet Jewry movement began to fade even as Soviet Jews emigrated in massive numbers in the early 1990s, those who know the movement’s roots have always acknowledged that he was the first person to imagine that emigration was even possible — and decided to fight for it.

Natan Sharansky, the most high-profile political prisoner in Birnbaum’s cause and now the chairman of the Jewish Agency for Israel, reached for a biblical analogy to describe Birnbaum’s significance. He was, wrote Sharansky in an email, like Nachshon in the Exodus story, the man who bravely jumps into the Red Sea before it has even parted, a sign of his faith.

Like the scared children of Israel, “Jews on both sides of the Iron Curtain stood hesitant and were afraid to act. Soviet Jews feared immediate cruel oppression from the authorities, while the American Jewish establishment’s leaders feared damaging the Soviet Jews with their public actions.” But Birnbaum, noted Sharansky, had the faith of Nachshon, ready to leap first. He knew that the sea would part because he had righteousness on his side.

It is always easier to look back from a vantage point of success and imagine that the course of history was foreordained, but in the early 1960s neither the emigration of nearly two million Jews from the Soviet Union nor the fact that American Jews would exercise the political muscle to turn this cause into a major sticking point in the Cold War seemed inevitable in any way.

When in 1987, a quarter of a million people gathered on the Mall in Washington to greet the Soviet premier, Mikhail Gorbachev, on his first visit to the United States, Birnbaum was relegated to a seat at the back of the dais, forgotten amid the celebrities and politicians who lined up to speak. He was bitter and would remain so until the end of his life, growing blind and increasingly disabled in a small apartment in Washington Heights that he had turned into a shrine to the Soviet Jewry movement. But he told me, one afternoon in that apartment a few years ago, that he also felt proud at that moment, reassured that his prophecy had come true.

Yaakov Birnbaum, who was sometimes known as Jacob, was born in Hamburg but moved to London with his family in 1933 just as the Nazi threat began to loom large. His grandfather, Nathan Birnbaum, was an important figure in early Zionist history, a 19th-century Viennese intellectual who, in fact, coined the term Zionism, but then left politics for spirituality, starting his own neo-Hasidic sect. Solomon Birnbaum, Yaakov’s father, was a quieter man, a philologist who spent the war years in London working in the censorship bureau, reading desperate letters from abroad. Yaakov grew up in the shadow of World War II, constantly aware of the massacre that he had narrowly escaped.

He arrived in the United States only in the early 1960s after years of searching for a way to channel his energy. He had worked briefly as the director of a Jewish community center in Manchester, England and it had made him depressed about the bloodless state of Jewish life. He wanted passionate engagement and enlightened community — the kind of high that he felt working with resettling teenaged refugees after the war. Shortly after arriving in America he got to know a group of students, many of whom would become future religious leaders in the community – like rabbis Yitz Greenberg and Arthur Green. And the plight of Soviet Jews, unable to practice their identity, discriminated against, but also forbidden from leaving their country, animated them and inspired the idea for a student movement.

Within weeks of the May 1 protest, Birnbaum and his students organized dozens of rallies and other happenings. Throughout the rest of the 1960s, Birnbaum would establish many of the tropes of the bigger movement that was to come. He had the sense that making demonstrations into acts of religious witness would be effective, and some of the first big protests coincided with holidays like Hanukkah and Passover. But he also borrowed much from the style of activism then so prevalent, introducing protest songs and marches and slogans that carried echoes of the other movements of the time. This combination, turning the Soviet Jewry cause into both a Jewish and deeply American one, was in many ways Birnbaum’s most lasting contribution.

Throughout these years, Birnbaum sacrificed everything for the movement, living an ascetic existence and turning his apartment into the unofficial SSSJ headquarters swarming with students and filled with placards and bullhorns for protest. Glenn Richter, a student who worked with Birnbaum from the early days of SSSJ and became its national coordinator, told me that he was shocked in those early years to see that Birnbaum even washed his clothes in the bathtub because he didn’t want to spend money on a laundromat. “This was first and foremost a man with both an over-the-horizon vision, an utterly determined, focused individual, without concern for his own wellbeing,” Richter said. In 1971, Birnbaum married Freda Bluestone, a photographer who had been active in SSSJ. He is survived by her.

By the 1970s and into the 1980s when Soviet Jewry became a global cause with large established organizations dedicated to the cause, Birnbaum and SSSJ were marginalized, never able to match the resources and capacity of the larger groups. He stopped being as involved in the day-to-day operations, taken over by Richter, as well as Avi Weiss, the Riverdale rabbi who became the face of SSSJ.

But the Soviet Jewish dissidents and refuseniks never forgot Birnbaum’s central role as the person who provided the first major push that would eventually lead to their freedom. The same qualities that often made him seem eccentric to the Jewish establishment leaders — his overexcited speech, his tone of righteous indignation — felt to these Soviet Jews like exactly the right approach for their desperate situation. When asked for his reaction to the news of Birnbaum’s death, Yosef Mendelevich, a Soviet dissident who himself once plotted to hijack a plane so that he could escape the Soviet Union, expressed shock and sadness. “Jacob will never die,” he said. “His sons whom he got out of slavery are alive. Since they are alive, Jacob is alive.”

Gal Beckerman is the Forward’s opinion editor and the author of “When They Come for Us, We’ll Be Gone: The Epic Struggle to Save Soviet Jewry” (Houghton Mifflin Harcourt, 2010).